Hutton: My public sector pension cuts are not deep enough 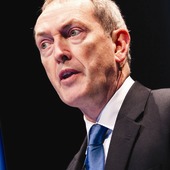 Lord Hutton, who recommended the government's current reform plan just nine months ago in March this year, said the worsening state of the economy will make further cuts necessary.

"The assumptions which underpinned my assessments of the long-term sustainability of public service pensions have been shown to be too optimistic," Lord Hutton said in an interview with BBC Radio 4.

"That is going to affect the sustainability of public sector pensions in a negative way."

The ground underneath his previous estimates has changed "radically" in the "wrong direction", he said.

"We cannot be sure the costs will fall over time and that we get to a more sustainable balance."

The Office for Budget Responsibility has said the government must pay £10bn over the next four years to keep public sector pensions funded, despite the planned 3% rise in employee contributions.

On 30 November, hundreds of thousands of public sector workers walked out on strike in protest against the reforms to their pensions.

The reforms include a move from final salary to career average schemes, an increase in contributions and later retirement dates than presently allowed.

A total of 88 MPs have signed an early day motion calling on the government to reconsider its reforms.