Kit Yates: maths for the masses 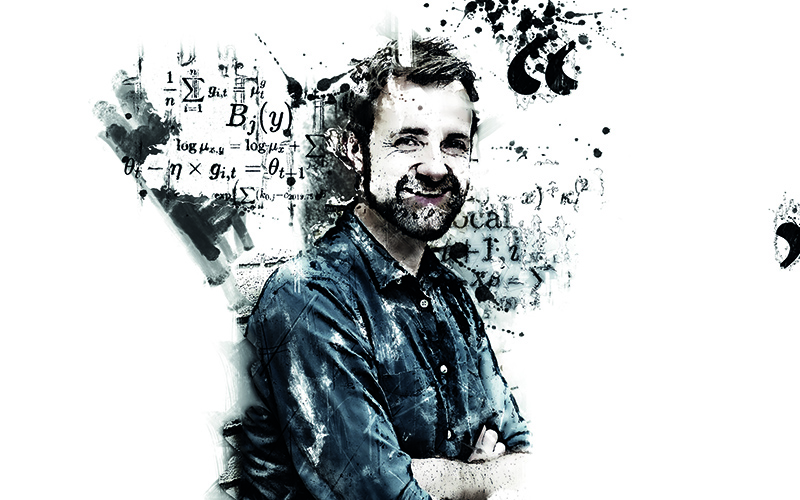 Kit Yates, senior lecturer in mathematics and co-director of the Centre for Mathematical Biology at the University of Bath, is on a mission to make mathematics more accessible.

Pre-pandemic, this involved giving engaging interactive talks and publishing his first book, The Maths of Life and Death, in 2019. He is now an active scientific voice on COVID-19, and since October 2020 has been a member of Independent SAGE – a group of scientists working to provide independent scientific advice to the UK government and public on COVID-19.

“Mathematics is this real, living, breathing subject that people can take part in for enjoyment, and which has real implications,” he says. “During the pandemic, we’ve seen lots of instances in which data has been abused by different sides to tell stories, which might not necessarily be true.”

The maths of life, death and COVID-19

One of Yates’s motivations for writing his first book was to help people understand the everyday importance of mathematics. A lack of mathematical-mindedness can leave one open to exploitation and deception.

The pandemic has provided plenty of opportunities for this, “particularly in places like newspapers, where people will use statistics to make a particular point, but it is not necessarily the whole story”.

One example is from the very early days of the pandemic, where death rates were being reported as the ratio of deaths recorded on a particular day to the number of cases recorded on that day. “This did not take account of the big lag between diagnosis, hospitalisation and death. When cases were growing exponentially, cases on a particular day might be very high, but deaths would be lagging behind. It was giving the false impression that there weren’t that many deaths per case, and that was making it seem like COVID-19 was less serious than it was.”

Another early misunderstanding was related to models. Yates pointed out that, in early 2020, the Imperial College model suggested that there would be 250,000 deaths if the government continued with their policy of mitigation, and this was a key factor in leading the government to impose lockdown. “Because those 250,000 deaths didn’t come to pass, people said, ‘the model is rubbish. There is no credibility’. But, in fact, the model influenced reality. It caused the lockdown. The fact that it was a self-defeating prophecy doesn’t mean that the model was not appropriate under the assumptions that it started with.” Subtleties like these can get lost, and Yates believes that, as scientists and risk professionals, “it’s our job to explain them”.

For Yates, a balance needs to be struck when it comes to jargon. “We need to use jargon less if we can, and explain things in terms which everyone can relate to and understand.” At the same time, he cautions that over-simplifying can risk losing important nuances.

A strategy for striking a balance can be to use a ‘cartoon model’ that is not overly difficult to grasp, but which gives the audience a sense of the types of complexities at play. For example, “an SIR model is the most basic type of model we can use for epidemiology. No one, in reality, uses SIR models, but it gives people a flavour of what we do.” Once people can grasp these simple models, it’s easier to introduce them to more complex ideas in extended models.

Another strategy is to make sure the audience understands any unintuitive mathematical concepts that are key to the conversation. For a discussion around COVID-19, this could be a concept like exponential growth. “We tend to think linearly, and in a straight line. We find exponential growth hard to grasp unless we understand the mathematics – how something growing in proportion to its current size can very easily get out of control.” Luckily, once people grasp this concept, it can really change their behaviour. “There’s good evidence to show that when people understand exponential growth, they comply better with mitigations that are put in place. Because they get it.”

For scientists, actuaries and other mathematically-minded people, it can be easy to forget that concepts such as exponential growth are not intuitive to many people.

This is why Yates recommends having “a couple of interested, intelligent friends who don’t have a mathematical background” as sounding boards.

One of the reasons that Independent SAGE was set up, Yates explains, was to increase transparency. “Minutes from SAGE were not being released; we didn’t know who sat on SAGE.” Independent SAGE proactively engages with the public, including through weekly briefings.

How far should scientists go? Should they make policies? While Yates is clear that policymaking should remain the government’s role, he also urges scientists to be more active and explicit in the advice they give. “Many scientists would say that it’s not our job to advocate for particular policies. I personally don’t think that’s the case.” For Yates, it would not be enough for a scientist to simply state that “COVID-19 is airborne”. With this fact should come specific policy recommendations: improve ventilation or ask people to wear masks. “We have to be advocating for policies. It’s not enough to just present the facts and leave it at that.”

Scientists, of course, don’t always agree on the policies they advocate.“The pandemic has created some rifts between different groups of scientists,” Yates recognises. “I think there have been instances where the reputation of science has been damaged – partly by bad-faith actors, and partly due to different groups of scientists falling out with each other, very publicly, over what would have been very quiet, backwater scientific debates in previous times.”

While debate is at the very heart of science, “it can damage people’s confidence in science” when it plays out on social media, he says.

Mathematics is this real, living, breathing subject that has real implications

In the almost two years since COVID-19 was declared a pandemic, has progress been made? When it comes to the UK government’s responses, Yates doesn’t think so. A key communication error, he believes, is when the government gives the impression that the easing of restrictions is irreversible. “It’s so hard to go back on that.”

He commended the UK government’s first roadmap, where, coming out of the third national lockdown in 2021, it took a data-driven approach. While a data-driven approach may lead to more uncertainty for individuals and business owners than a guaranteed easing of restrictions, Yates points out that restrictions are inevitable when cases rise. The only difference is in the timing and extent. “The people who advocate for no restrictions are effectively the people who are advocating for lockdowns later on because, by doing nothing, you allow the situation to get out of hand. So I don’t think the government has learned many lessons, unfortunately.”

On the other hand, Yates does think there has been progress in the public’s understanding of science and mathematics. “Most people had never heard of the reproduction number before, but many people would be able to give a rough definition of what it means now. It’s got people interested in science. From that point of view, there is a small positive to be taken out of an awful situation.”

There have also been valuable lessons that scientists and risk professionals can learn from. “There are a lot of parallels between COVID-19 and climate change, which is a bigger existential threat than COVID-19,” he says. “I’d like to think that the mechanism and method that we’ve developed for communicating science with Independent SAGE would also be useful for climate change.”

In fact, Sir David King, the founder of Independent SAGE, has also set up the Climate Crisis Advisory Group, an independent group of scientists that advises on climate change and biodiversity.

However, Yates suggests the communication challenge around climate change may be even greater. “COVID-19 has immediately gripped everyone’s imagination because it’s changed people’s lives very quickly. Climate change is more of a slow burn. There’s a difference in the level of attention that will be paid to these two crises.”

How to expect the unexpected

In addition to academic work and public engagements, Yates is also working on his second book – How To Expect The Unexpected – which explores what could go wrong when we try to predict the future. With the ideas in this new book, including negative feedback loops, our inability to comprehend non-linear relationships and randomness, and our tendency to see patterns when they don’t exist, Yates again hopes to bring mathematics to life.

“I like to try and explain the intricacies and the usefulness of mathematics, and convince people that maths doesn’t have to be like it was at school,” he says. “It isn’t just written down in textbooks, with all the answers figured out 400 years ago. It is an important, interesting subject, and a little bit of mathematical knowledge can go a very long way.”

This article appeared in our January/February 2022 issue of The Actuary.
Click here to view this issue
Filed in
Interviews
Topics
Data Science
Soft skills