Jørgen Randers: An end to growth?

Professor Jørgen Randers talks to Chris Seekings almost 50 years after the publication of The Limits to Growth, and outlines what we can expect for the world during the next half-century 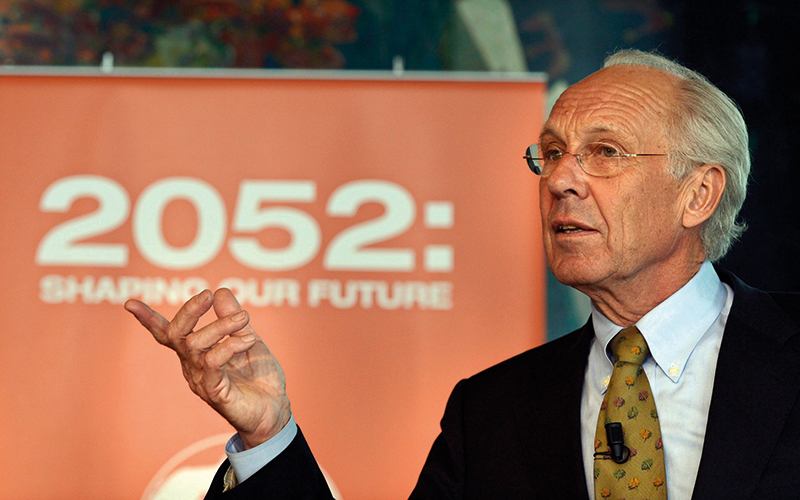 It’s almost 50 years since Professor Jørgen Randers co-wrote the groundbreaking report The Limits to Growth, which sparked an enduring debate around the implications of endless population growth and resource use in a world of finite resources.

Using system dynamics theory and computer modelling, the authors outlined 12 potential scenarios for world development up to 2100, with the business-as-usual path suggesting an economic collapse sometime in the 21st century.

Despite being dismissed by critics as a doomsday prophecy, more than 30m copies have been sold in 30 languages since its publication in 1972, with the actuarial profession keeping a close eye on how the original forecasts have aligned with empirical data. A 2013 study (bit.ly/IFoA_FiniteWorld) commissioned by the IFoA found that the available data agrees “worryingly well” with the projections, and that the implications for actuarial practice are “urgent, complex and many”.

As the global economy looks to bounce back from the COVID-19 pandemic, Randers looks at the trajectory the world is currently on, and what this means for financial markets, the environment and society during the next 50 years.

The scenarios outlined in The Limits to Growth – which was commissioned by the Club of Rome – were derived from the World3 computer model developed by Randers and his colleagues while studying at the Massachusetts Institute of Technology. “We were the only people we knew at the time who were working on the biggest questions of population growth and environmental science as they were emerging,” he explains. “We took it for granted that growth in the extraction of resources, population and pollution would have to stop, but were asking whether this would happen through smooth adjustments within the limits of the planet or through overshoot and collapse.”

The report attracted significant criticism, with some economists suggesting that the forecasts were ideologically motivated and assigned little value to the role of technological progress in solving resource depletion, pollution and food production problems. However, subsequent work continues to confirm that insufficient changes have been made in resource consumption since 1972. “The reason it became so popular is that it was attacked so fiercely within a couple of weeks after publication,” Randers says. “People asked, ‘What the hell are these guys saying that makes these economists so angry?’ That’s when it took off.”

“One of the ways to solve the dependency ratio issue is to increase the pension age. By simply shifting it a couple of years, you remove the whole problem”

At the time, many people thought that the world would run out of coal, oil and gas. However, this is no longer a pressing concern, with Randers saying that we are instead following Scenario Two from the original report: pollution collapse. “This is where there are no resource constraints and society keeps expanding with ever more activity and emissions. This seems to be the most likely future, where we do not control emissions fast enough, and consequently the temperature rises roughly 2.5°C above pre-industrial levels by 2075 before starting to decline.”

Randers last published a book on the environment, 2052: A Global Forecast for the Next Forty Years, in 2012, and says that when it comes to climate change and pollution, “we are clearly in overshoot”.

“Humanity is emitting much more into the atmosphere than is absorbed by the oceans and the forests. The big task at hand is to push the unsustainable emissions we have today down to zero, and then negative emissions for a couple of hundred years to suck the carbon dioxide out of the atmosphere. The question is, can this be done in a smooth manner?”

However, before large-scale ecological collapse, Randers believes we will first witness societal breakdown. He points to Brexit and the election of Donald Trump as symptoms of growing inequality in the West, which, combined with increasingly frequent extreme weather, could create a perfect storm for social unrest. “It’s possible to run a society as long as there is income growth, but once that starts to decline, people get very upset. It is a drain on the spirits of the people who face increasing inequity and low labour participation rates. With ever-rising extreme weather, I think some people will get very frustrated, and then you don’t really know what will happen.”

Despite the bleak outlook, he says humanity can still avert a societal and ecological collapse – but this will require political and financial choices that only give a benefit 30–60 years into the future. “The real challenge is to get short-term markets and short-term people to agree on action.”

How we interpret economic development is of particular concern for Randers, who says it is “totally ridiculous” to look at GDP in isolation as a measure of success. He argues that economists who have embraced a “neoclassical macro” approach to growth have too much influence over political discourse, and that new indicators are needed. “GDP is simply a measure of the activity level, which is why it increases when there are floods or hurricanes and a consequent boom in construction,” he explains. “We need to use the quality of life indicator, which depends on how much food there is – not the value of food – how much pollution there is in the air, and the purchasing power people have.”

He says that while the financial sector has a crucial role to play in tackling global poverty and the climate crisis, an unregulated market cannot solve these issues. “They must accept that not all the things that need to be done are profitable from the investor point of view, and call for governmental regulation and the subsidies needed.”

Randers also points to the EU’s taxonomy for green investments as a well-intentioned initiative, but says it would be much easier to focus more on fossil fuels, which he says are responsible for 70% of the environmental problem. “Replace coal, oil and gas with renewable energy, replace agriculture with regenerative agriculture, and change the development model that we have been trying in vain to force onto the poor world,” he says. “It involves taxing the rich and making them pay for transitional costs to build wind power and regenerate forest in the Global South where it’s most desperately needed, and just give it to them so they have the low-carbon energy for economic development.”

The latest trends suggest that we are unlikely to continue to see the same sharp population growth witnessed during the past 200 years. Randers says this is likely to peak in the 2050s at around 9.5 billion people, and then decline rapidly down to around six billion in the year 2100 – the same amount as in 2001. “The reason is simply that the number of children per woman has been falling like a stone across the world, particularly in poorer countries, over the last 50 years,” he says. “The position of women has improved dramatically through education, health and contraception, and this is not going to change in the next 50 years. The population goes down not because people starve, but because of the major shift in the self-determination of women.”

Although it remains to be seen what the long-term impact of COVID-19 will be on life expectancy, he believes people should not be concerned about fewer people being born to take care of a growing older population. “There will not be a huge rise in the dependency ratio, even when a population declines – and of course, one of the ways to solve this issue is to increase the pension age. By simply shifting up the pension age by a couple of years, you remove the whole problem of the dependency ratio.”

In a final message for the pensions industry, Randers says that it is again crucial to avoid short-term thinking. He argues that a shift in focus to long-term metrics would facilitate greater investment in the types of assets that are needed to support the transition to a low-carbon economy.

Next year is also the 50th anniversary of the UN’s Conference on the Human Environment, known as the Stockholm Conference, and the occasion will be used to launch a follow-up book to The Limits to Growth in June 2022. Although Randers is reluctant to say what exactly will be in the book, he says that there are reasons for optimism. “There has been a move in the right direction since 1972 – institutions such as the Intergovernmental Panel on Climate Change have been built, and we have ministries for the environment – but our models show that we can’t continue progress at this slow pace.”

With a career spanning politics, finance and academia, he is not afraid to speak bluntly about where the world is heading, and the widespread changes needed. “I’ve been a chairman of three banks and started a number of companies, so I have all the credentials, but now I’m starting to get hectic about things. Someone needs to speak very clearly about why we are moving so slowly,” he says. “The world is not going to collapse physically, but it will not be very nice on our current trajectory, so we need to accelerate the response – double or perhaps treble the speed – so we are not procrastinating for another 10 years.”

This article appeared in our December 2021 issue of The Actuary.
Click here to view this issue
Filed in:
Interviews
Also filed in:
General Features
Topics:
Risk & ERM
Environment
Global