Paul Johnson talks to Stephen Hyams about UK pensions, how the current turbulent period could impact the economy, and tackling climate change 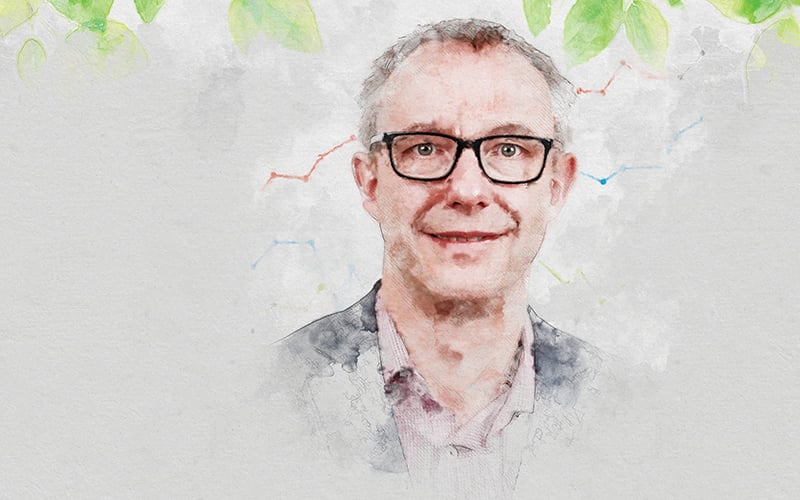 Paul Johnson CBE, director of the Institute for Fiscal Studies, is a highly respected commentator on the economics of public policy, including pensions and climate change. Interest rates are a key driver in shaping policy, and we begin by discussing the impact and causes of the low-rate environment.

“The large fall in interest rates has had massive economic and social consequences,” Johnson says. He refers to the significant intergenerational transfer of wealth caused by the steep rise in asset values and people’s reduced capacity for saving. Quantitative easing clearly contributed to the decline in interest rates, but Johnson also cites the glut of international savings, the UK’s ageing population, a flight to safety in the financial markets, and the regulatory requirement for financial institutions to hold government bonds. With the state of the world’s economies remaining fragile due to COVID-19, he expects interest rates to stay low for some time.

Low interest rates have been a key factor in the demise of defined benefit (DB) pension schemes, as they inflate the value placed on the liabilities. In the defined contribution (DC) world, it is manifested in the high cost of annuities. “We no longer have a pension system in the UK, with few DB schemes outside the public sector and DC schemes being essentially savings vehicles,” Johnson says.

The problem is compounded by inadequate levels of pension contributions – but Johnson asks: “Is the answer to force people to save more in a world of low investment returns and costly annuities?” He concludes that people will have to work longer to make retirement more affordable, and speculates about the possibility that the government could provide financial support for those who live to an advanced age – although that would be a regressive measure, since these people tend to be more affluent in the first place. He draws a parallel with the Dilnot Report’s recommendations on protecting people against the potentially catastrophic cost of social care. Collective defined contribution schemes might help by offering an alternative form of annuitisation.

“I have sympathy with the idea of a higher state pension in the medium term,” he says. However, he adds: “A serious public policy issue is the widened gap in state support pre- and post-state pension age, which has a big impact on living standards of those who are unable to find work, or are sick or disabled.”

A matter of tax

What about pension taxation? “After VAT, cuts in pension tax relief have been the second-biggest tax rise during the past decade, with little public acknowledgement,” says Johnson. “This has especially affected higher earners, but further cuts would increasingly impact middle earners.”

Johnson sees the logic in a lifetime allowance (LTA) of around £1m as the maximum value of pension for tax purposes. “That will buy a pension of about £30,000 per year, arguably as much as anyone needs. However, I see no reason for the annual allowance to limit the way in which you achieve the LTA, which can have unfortunate consequences for some people. I don’t think there is sufficient recognition that, in a sense, any tax is retrospective because it changes people’s expectations. An increase in VAT is retrospective in reducing a pensioner’s net income”.

Johnson also questions the generous treatment of DC pots for inheritance purposes, the effectively much greater limits on contributions to DB schemes, and the way that pension contributions can escape National Insurance. However, tax relief on either contributions or pensions in payment is essential. While moving from the former to the latter would provide an attractive boost to public finances in the short term, it would probably not be good policy in the long run.

We return to the topic of public sector DB schemes. “The projected cost of these pensions as a percentage of national income is not projected to rise,” Johnson says. “While they are affordable, that doesn’t necessarily mean they’re appropriate. I also worry about the enormous differential between the public and private sector pensions, which has grown dramatically.”

Johnson speculates over whether public sector workers would value a pay increase more highly than an equivalent reduction in pension, and whether the government might do more to support private sector pensions.

“It’s hard to argue any longer that more generous DB pensions in the public sector make up for lower pay,” he says. “On average, there are no discernible gaps between public and private sector pay. Public sector workers are paid competitively relative to the labour market, and really quite well in significant parts of the country – although this is clearly not true in London and its surrounds.”

What is the impact of this on job mobility? “I don’t have the data, but there’s clearly an economic cost if significant groups feel they’re much better off in the public sector.”

Johnson observes that pensions are part of a broader set of labour market issues, including unionisation, job security and other aspects of working practice, where differences have grown between the public and private sectors. These issues can be observed to an even greater extent in some other European countries.

The conversation turns to the economic outlook against the backdrop of Brexit and COVID-19. “Brexit will have a negative impact on some aspects of manufacturing, because trade barriers with Europe will grow,” Johnson says. “The outcome for traded services will also probably be negative in the long run. Tough decisions will be needed about how we support people in parts of the country that are affected.”

He draws a parallel with the 1980s’ costly transformation away from mining and manufacturing, the effects of which manifest to this day – although he is not suggesting the impact will be on the same scale. “We don’t know what the long-run impacts of COVID-19 will be, but with more people working from home there are likely to be significantly fewer people in city centres on any one occasion, which will be disruptive and costly for businesses.

“You can layer these two new massive uncertainties on top of the past decade of negligible productivity and earnings growth, and businesses have not been investing during the past year. We’ve clearly got
a challenging economic period ahead – hopefully some positives, but a lot of costs to deal with during the next few years.”

In terms of fiscal policy, Johnson does not expect any significant tax rises until the middle of this decade, unless something dramatic happens to economic growth. “The high level of government debt will have to be reduced at some point, which will involve some tough decisions.”

On the government’s ‘levelling up’ agenda of regional development, he is worried about the “scale of expectation” created. “If you’re serious about making big changes, it’s a generational challenge to achieve a long-term sustainable policy. I am also concerned that the focus is on physical infrastructure; education or social policies are also going to be extremely important to achieving anything with that agenda.”

When it comes to monetary policy, Johnson expects interest rates to remain low provided inflation expectations also remain low; this is clearly vital in the servicing of large amounts of government debt. “While price pressures are currently downwards due to lack of demand, the scale of fiscal and monetary easing we’ve seen in the last year means there is a risk of inflation. That will be exacerbated if sterling was to fall in value.”

He also sees a constitutional risk in the event that Scotland were to break away from the UK, which could have a negative impact on the cost of borrowing.

“We no longer have a pension system in the UK, with few DB schemes outside the public sector and DC schemes being essentially savings vehicles”

Another consideration is the economic impact of tackling climate change. Johnson feels that the UK’s record has been good during the past decade, especially in the decarbonisation of electricity production. Bigger challenges lie ahead, though.

“My concern is that the scale of the change required is not appreciated,” he says. “For example, we are a long way from decarbonising household heating with a switch away from gas, or from electrifying travel.” There will be big expenditure involved, although developing the new technologies required will bring compensating economic opportunities for some countries.

Johnson is a long-serving member of the Committee on Climate Change (CCC) and explains, “Its main role is to advise government on how to reach its carbon target, which on our recommendation was strengthened to net zero by 2050 – a big change in ambition from the previous target of an 80% reduction by the same date,” he explains. “We then advise government on how to reach that target through successive five-year periods, looking at some of the challenges and policy options.”

The CCC also reviews progress and policy effectiveness. The UK’s hosting of the international COP26 conference in November 2021 presents a good opportunity for it to take a lead, he believes. “This is a classic collective action problem. In some ways, the world is doing a pretty good job, but we’d be foolish to think the argument has been fully won.”

This article appeared in our March 2021 issue of The Actuary.
Click here to view this issue
Filed in
Interviews
Topics
Pensions
Careers