Rob Lynch moved from his native Ireland to work, firstly in Munich then later Zurich in the reinsurance sector. It has enriched his life with a perfect mix of rewarding work, and enjoyable leisure pursuits 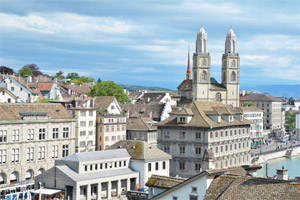 Rob Lynch moved from his native Ireland to work, firstly in Munich  then later Zurich in the reinsurance sector. It has enriched his life with a perfect mix of rewarding work, and enjoyable leisure pursuits

I had a desire to work in different cultures, with better weather. Also, I was fed up with Irish politics

I had previously worked for Swiss Re in Munich in a reserving role and when I found myself looking for a pricing role in Zurich it seemed like a good fit for all involved.

A combination of my wife refusing to move further away from Munich and Switzerland being the closest thing I've yet experienced to a paradise.

Initially there was a certain amount of loneliness but then pretty blonde girls and excellent beer got in the way. Workwise I've found both the Swiss and the Germans to be much more structured than the Irish or the Brits so that took a little bit of getting used to but now I appreciate it tremendously.

What are the main differences you have found to working overseas compared to working in the actuarial profession in the UK?

I guess it's always easier to stay in the same location you've grown up in, maintain the same group of friends, and so on, but I've found it nothing but invigorating to travel and meet new people and experience different cultures. From a work-life balance perspective Munich was incredible but I think Zurich is a good halfway house between London and Munich. In the end it shouldn't be about the number of hours you work but what you produce. Finally, I've found reinsurance to be deeply rewarding in terms of challenges but often I've had to be prepared to travel to find those challenges.

What is the most topical industry issue facing actuaries in the country where you work?

I can only speak for reinsurance but I suspect it's about dealing with very historically low long-term yields and how best to manage the liquidity strains of a company.

I work with tremendous, dedicated and decent people.

No dogs allowed in the office.

Give an unusual fact about the country in which you work.

Women have only been allowed to vote here in federal elections since 1971.

Dedication, friendliness, patience, a certain amount of intelligence and a lack of ego.

Do you have any advice to others looking for overseas work?

No - I've only had positive experiences from my move but I think that's just anecdotal and likely to depend very heavily on the personality of the individual.

No - I've never worked in Asia which is home to more than half the world's population. I'd like to think I'd get on just as well as I did in central Europe but I can't honestly say that for sure at this point.

Wherever my wife tells me I should have been about an hour ago.

What is your favourite local custom / tradition and do you join in?

The Zurich (re)insurers organise an annual fancy dress rubber dinghy race around the lake here and for sure you'll find me there on one of the boats. Often senior management participates which makes it doubly fun.

My wife didn't speak English when we met - so yes.

Have you taken up a new sport / pastime?

No - I'm currently injured and recuperating on my back from engaging in the last sport I took up.

How often do you read The Actuary magazine? Do you read on-line or in print? Do your colleagues read it?

A lot of the folks in the office who take the exams read it. I read it in print.

Is there anything else that you would like to add, which you think would be of interest for others to know?

One of my best friends who's now a senior manager once wrote to me "Don't take yourself too seriously; I don't t" and I've always tried but often failed to live by that. I typically see actuaries get themselves wound up butting heads with each other over things that ultimately don't have huge importance.