Sonal Shah had just completed a Solvency II contract in London and was thinking of getting away for the British winter. Although she may have had somewhere warmer in mind, when an opportunity to work in Switzerland for four months presented itself, it was too good to say no to. 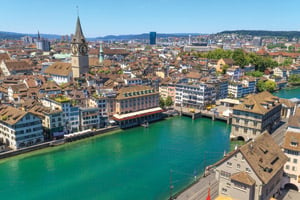 Sonal Shah had just completed a Solvency II contract in London and was thinking of getting away for the British winter. Although she may have had somewhere warmer in mind, when an opportunity to work in Switzerland for four months presented itself, it was too good to say no to.


How did you find the contract role overseas?

I had completed a Solvency II documentation contract in London, and was contemplating a few weeks off to travel to sunnier climes to escape the British winter. It just so happened that a recruitment consultant got in touch with me around that time to gauge whether I would be interested in working on a project in Zurich for a few months. I decided to apply for the role.


What attracted you to the particular country that you were working in?

Despite Switzerland not conforming to my hopes of 'sunnier climes' at that time of year, I was keen to revisit Zurich. It was a city I was familiar with, having previously worked there for three months a few years ago. I suppose spending winter in Switzerland compared with the UK wasn't too difficult to weigh up!


What were the main challenges you faced when moving overseas?

As is often the case with contracting, an urgent need for a suitable resource means that the turnaround time from applying for a role to being hired can be very short. I had under a week to sort out my move as the client needed me to start working as soon as possible. Given the contract nature of my role, I had to make all travel and accommodation arrangements myself. One of my main challenges was finding accommodation at very short notice, which is difficult enough in Zurich, and even more so for short-term tenancies.


What are the main differences you have found working as a contractor overseas compared with contracting in the UK?

A popular approach to contracting in the UK is to do it via one's own limited company. I found that contracting is far more complicated for foreigners in Switzerland whose company is not registered there. This was made worse by lack of time to overcome the mountain of Swiss bureaucracy. So the recruitment agency put me in touch with a company specialising in global payroll and contract management. For a not insubstantial monthly fee, given the cost of living in Switzerland, the management company arranged my work permit/registration, payroll, tax, social security, pension and professional indemnity insurance.

Effectively, the set-up was such that I was on the management company's payroll as a consultant to the client. This meant that the contract was in my name. Such a set-up may not be favoured by some UK contractors, who carefully plan the structure of their limited companies around both personal and corporation tax efficiency. Depending on local rules, contractors may be allowed a certain personal tax-free expense allowance.

Despite the increased organisation and costs involved, contracting overseas can provide the opportunity to interact with a diverse group of professionals and to get involved in interesting and possibly more varied work than contracting roles in the UK, which are typically rather specific in nature.


Do you have any advice for others looking for contract roles overseas?

Do your research on how contracts are set up, work permit/visa requirements, the cost of living (given that, as a contractor, you will be responsible for all your expenses), tax and other compulsory deductions, local language requirements, lifestyle changes and cultural differences.

Don't be put off by the extra administration involved in contracting abroad; the benefits far outweigh this. Taking on a contract role for a few months can be an excellent way to explore a new country while enhancing your actuarial experience.


What is the best thing about where you worked?

Nature in Switzerland is splendid. The excellent Swiss public transport means that, from Zurich, one can be on the mountains within a couple of hours.

Perhaps the temperature dipping to below -10 degrees Celsius in the city more than once.


Have you learned a new language?

I managed to improve a little on my basic German skills, and picked up a smattering of the local language, Schwyzerdütsch (Swiss German).


What was your favourite local custom / tradition and did you join in?

The Swiss love to make the most of their countryside; in winter months, winter sports in the mountains are very popular. Here, I discovered a new sport: snowshoeing. Not to mention the scrumptious Swiss chocolate and fondue - fortunately suitable fare for a vegetarian!