Sunning it up in São Paulo

David Beatham is chief pricing actuary, general insurance, at Zurich, Brazil. After spending three months working on a consultancy project in Rio de Janeiro, he decided to make the move permanent and switch offices from the UK to São Paulo. Here, he provides an insight into his work in the emerging Brazilian market 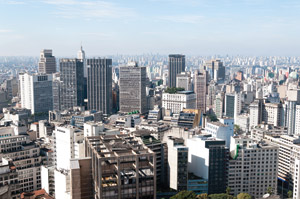 Sunning it up in São Paulo

David Beatham is chief pricing actuary, general insurance, at Zurich, Brazil. After spending three months working on a consultancy project in Rio de Janeiro, he decided to make the move permanent and switch offices from the UK to São Paulo. Here, he provides an insight into his work in the emerging Brazilian market


Explain what motivated you to seek employment overseas

I wanted the opportunity to work in a different culture, getting experience outside the UK market.


What attracted you to Brazil?

Swapping the freezing cold UK climate for a tropical climate is obviously a great benefit. Brazil is so large - it would take years to fully explore the whole country. Between the magnificent Iguassu Falls, the Amazon rainforest, the sun-soaked beaches of Rio de Janeiro and the fantastic resorts in the north-east, there really is an almost unlimited scope to your travel options.


What were the main challenges you faced moving overseas?

Learning Portuguese is critical as English is not widely spoken. The vast cultural differences between Brazil and England take a bit of time getting used to as well.


What are the main differences you have found working overseas compared with working in the UK?

Lunch is a very important part of the day. All Brazilians eat out for lunch in restaurants.


What is the most topical industry issue facing pricing actuaries in Brazil?

Pricing actuaries are relatively new within the Brazilian market. There has been a strong drive in recent years to focus on solid, technical-based pricing and more sophisticated rating tariffs. This is particularly important in the personal lines motor insurance market, where new entrants and increased competition have put increased pressure on bottom-line results.


What is the best thing about where you work?

The opportunity to chill out in the swimming pool or go to the beach at the weekend all year round.

São Paulo is world-renowned for having some of the worst traffic jams in the world. Most people use cars to get around the city of 20 million people because of the poor-quality local transport system. A heavy tropical rain storm during Friday night rush hour can bring the whole city to almost gridlock. Living near the office is an absolute must.


Tell us an unusual fact about São Paulo

Over 300,000 Japanese people live there, mostly in the Liberdade neighbourhood. This is the largest Japanese population in the world outside Japan.


Do you have any advice for others looking for overseas work?

I think it's important to visit the country first, either on holiday or, ideally, working as part of a project. Getting a work visa for Brazil is not a trivial process, so it's best to try to get an internal transfer within a company or arrange the job before you decide to make the move.


Would you describe yourself as a global actuary and why?

I don't think I can claim global status at this stage of my career. Before I do, I'd really need to have worked in at least three different continents.


Have you learnt a new language?

I've learnt Portuguese, which is a very important part of adapting to the Brazilian way of life. Spanish is next on my list.


Have you taken up a new sport/pastime?

I've been educating the Brazilians about the English style of football (or lack of it). São Paulo has a large amount of bicycle routes and the warm weather makes it great for cycling every weekend.

What future opportunities exist in the Brazilian insurance market?

Next year is World Cup, and the 2016 Olympics in Rio de Janeiro have accelerated both the rate of investment in infrastructure and the interest of multinationals to enter in the Brazilian market. The level of penetration of insurance is still low, with only 25% of Brazilians buying motor insurance and even fewer buying household insurance. The theory is that this will grow during the next decade as the middle class develops, creating more jobs and more opportunities.


Have you noticed anything different to the UK from an insurance perspective?

Three of the differences I have noticed in the personal lines prices area are that there is no legal requirement to purchase motor third-party liability insurance. In fact, the primary focus for most customers is physical damage cover. Also, selling directly via internet or telephone is virtually impossible as there is an extremely powerful labour union for brokers. And, lastly, the motor insurance market is highly concentrated, with only three or four major players controlling the majority of the market.