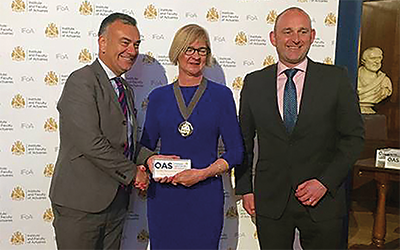 Mark was born in Bexley on 13 February 1962. After attending Chislehurst and Sidcup Grammar School, he went on to study mathematics at Wadham College, Oxford.

After graduating, Mark started his actuarial training with Willis Faber before moving to Mercer in 1987, where he worked for more than 19 years and where he met his wife Michaela. They were married in June 1990 and went on to have three sons – Ben, Dan and Louis.

Mark also worked at Buck for around 10 years, leading some of its largest client appointments and holding leadership and directorship positions, including serving as chief actuary. He was always larger than life, very professional, a ‘wise counsel’ and a good friend. Colleagues at Buck observed that one of Mark’s great attributes was nurturing young talent and giving them the trust and space to grow and develop while always providing guidance and support when it was needed.

Mark had a very successful career as an actuary, working at a number of leading consultancies and representing the IFoA as well as the International Actuarial Association. Mark believed in giving back to the profession and served on the Council of the IFoA for two terms.

During the past few years, Mark had set up Pensions Actuary Services, which he was passionate about and incredibly proud of. He had recently taken a step back from full-time work but continued to put his knowledge and experience to good use as an expert witness and pension scheme advisor.

Outside of work, Mark was keen to retain his involvement in education and was a governor at Birchwood High School for 18 years, becoming chair eight years ago. He was also a visiting lecturer in actuarial science at the University of East Anglia.

Mark had many interests outside of work, including a love of West Ham United football club and a surprising taste in prog rock and 1980s-themed festivals. He also loved being a grandparent to Dylan.

Our thoughts are with Michaela, Ben, Dan and Louis at this time.

Mr Hamish Gillon, a fellow based in Scotland, passed away aged 80

Mr Michael Levett, a fellow based in the UK, passed away aged 81

Mr Peter Downing, a fellow based in the UK, passed away aged 86

Mr John Ross, a fellow based in Australia, passed away aged 87

Mr Johann Sohnge, a fellow based in South Africa, passed away aged 81

Mr Gerard Jacobson, a fellow based in South Africa, passed away aged 82

Mr Thomas Bradfield, a student based in the UK, passed away aged 26

Mr Roy Betteridge, a fellow based in the UK, passed away aged 86

Mr Kendall Gaze, a fellow based in the UK, passed away aged 71 Two awards were also presented at Common Hall. The Award of Honour was presented to Past Master Fiona Morrison and clerk Lyndon Jones for their efforts for the WCA during the pandemic. As Master Julie Griffiths said: “They not only ensured that the Company survived, but it actually thrived”.

The Phiatus Award is made annually to an actuary who has made an impressive charity contribution. The award is not just for fundraising but recognises all forms of charitable work. This year’s award was given to Mike McLaughlin, an actuary from the US, for his work with the Trees that Feed Foundation: treesthatfeed.org

This article appeared in our March 2021 issue of The Actuary.
Click here to view this issue
Filed in
People & Social News
Also filed in
News