Steve Hales talks to Dan Georgescu about working abroad, data science, and the importance of putting people front and centre 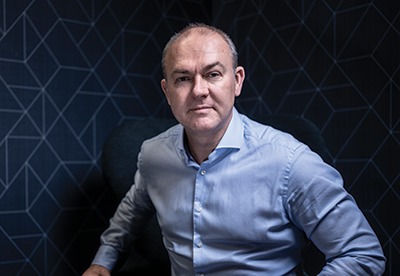 Having held senior positions in consulting and with European insurers, Steve Hales was unveiled as CEO of Bermuda Resolution Re in October of last year. He has lived and worked outside the UK for more than 20 years, spending 15 years in Madrid, Spain before moving to Trieste, Italy nearly seven years ago. I caught up with him by telephone, and started by asking how he got to where he is today.

Hales studied philosophy, politics and economics at the University of Oxford, where he was tutored by Sir Derek Morris - who went on to lead the government-sponsored review into the actuarial profession in the UK, known as the Morris Review. Asked what attracted a humanities student to the profession, Hales tells me that it offered a good combination of job satisfaction and quality of life. Maintaining this balance is still important to him, as he juggles a job and a family that are based in two different continents; his keys to a successful work-life balance are managing his time and making sure he focuses 100% on whatever he is doing at any particular moment. "It can be as mundane as mobile phone discipline and as exciting as spending a few days skiing with family and friends in the Dolomites before heading off to spend the week in Bermuda with the team. Crucially, though, when I am at home, I am with the family. I do not play golf."

Spending time living and working abroad, experiencing different cultures, is something he would recommend to any young actuary. "It opens your mind in ways you cannot predict," he says, adding that it has been "fun, surprising, refreshing, sometimes frustrating. One of the key things it does is make you think about is the impression you make on other people."

Something that shines through in Hales's answers is his focus on people. He is unequivocal about the most important lesson he has learned: "No matter how much we talk about technology, algorithms, interest rates and solvency rules, it all comes down to people. That is what motivates me in my work." He describes his proudest professional achievement as "seeing members of my team go on to be successful in other areas. For me, the sign of a good manager is letting go of your superstars and helping them to develop their own careers." He is very structured in his management approach, getting satisfaction from maintaining to-do lists and ticking tasks off.

Another lesson Hales has learned is that it is easy to confuse perceived wisdom with 'the truth'. "I have studied and learned several things in my life, both academically and professionally, only to realise later that they were just plain wrong. I guess that comes from studying humanities and working in the financial sector: I have spent my life surrounded by constructs invented by humans, not Mother Nature."

We talk about how the actuarial profession has changed since he started his career - in particular the diminishing mystique around it. "Knowledge has moved on and the lines between different financial disciplines have blurred," Hales says. He thinks this is a consequence of the opening up of society and the financial services industry through technology, regulatory change and consumer attitudes, and does not believe it is necessarily a bad thing. "If people do not understand what you do, they will not appreciate it."

Nonetheless, it is clear that actuaries will need to further adapt if they are to meet the challenges of a changing world. Hales believes that they should, for example, "proactively embrace the data science school of thought". He managed a team of data scientists for a time while working for Generali in Trieste, and came to greatly appreciate the ways they applied the scientific method to problems. How did an actuary in a traditional life role come to lead a data science department? Hales says he was undaunted by the challenge and pitched the role to his organisation as one of "taking a step back and thinking more widely". His job was to "connect the dots" between what scientists can do and what the business needs, as well as to ensure that those in traditional actuarial roles embraced new developments, recognising that actuaries operate where insurance problems meet statistical and mathematical developments. "You could argue that actuaries were the first data scientists, but now they need to get ahead of the curve again," he says. He believes that, in a fast-changing world, actuaries cannot stand still - so it is vital that new subjects such as the IFoA Certificate in Data Science are included on the syllabus.

Similarly, Hales says, actuaries need to get out of their comfort zone on climate change issues, which will affect our business on all levels: risk, investments, product and service opportunities. Should it be the next thing added to the syllabus?

I ask Hales about the course he will be steering as CEO of Bermuda Resolution Re. Building on his experience, the intention is to build a 21st-century reinsurer with a strong technology base, making appropriate use of developments in data science to automate mundane tasks and enable actuaries to focus on analysis and explaining insights. This could potentially include distributed ledger-style solutions, which can provide a fast and accurate record of data that has been shared with cedants. Reinsurers necessarily exchange a lot of data and it is important to make the most of available technology to speed up checks and processing time, as well as build a suitable platform to allow machine learning techniques to mine the data for emerging trends.

What is so attractive about the Bermudian operating environment? "Regulations need to ensure solvency in the sector so that customers can trust their insurer to be there for them when things go wrong, while also attracting fresh capital to allow the sector to grow. All of this in an environment of negative interest rates, accelerating technological advances and changing customer dynamics, both in terms of behaviours and demographics.

"Any system is going to be a compromise. My feeling is that the Solvency II principles are about right, but the level playing field principles have been implemented locally in different ways. Each regulator has its own concern and approach. This makes it difficult to speak about a 'European market' and limits what can be done at scale. And the treatment of sovereign debt distorts views on asset liability management, but does show the importance of the sector to the ongoing management of European economies."

The advantages of the Bermudian regulatory regime lie in its pragmatism, with links to both the European and US regimes; this allows for consolidation of balance sheets without requiring restatement. Hales's ambition is to build a technology-powered reinsurer that is able to reinsure life legacy books in mature markets across the world.

Finally, I ask Hales about the challenges posed by the changing political landscape - specifically Brexit. He is pragmatic about the outlook: "However it turns out, I would expect Brexit to complicate things when it comes to dealings between the UK and Europe; it's just a question of how and by how much. At a professional level it does not cause too many complications, as we are not reinsuring between the UK and EU. At a personal level, I guess it will make it more difficult if we decide at some point to move back to Europe, or if the children want to work or study in Europe. But let's see what happens before we make any judgments. As long as I can eat jamón Ibérico and drink prosecco, the rest is manageable."