Allan Martin discusses whether unfunded pension promises can all be kept 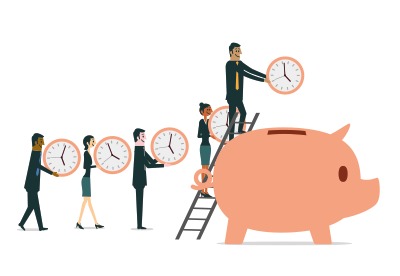 Pensions can either be funded for in advance, or be unfunded and dependent on taxes, revenues or other resources from future generations to pay the promised benefits.

At the end of 2017, OECD countries had funded pensions of almost US$29trn; very important to world stock markets and for equity and bond finance, and include both defined benefit (DB) and defined contribution (DC) arrangements. In comparison, unfunded DB pension promises in OECD countries in 2016 were a staggering $78trn, nearly twice conventional national debt.

The unfunded promises are growing rapidly, but are a lot less visible and quantifiable than funded arrangements in terms of the value of accrued liabilities and of the liabilities built up each year in the future. As an example, the UK is estimated to have the following DB pension liabilities:

In addition, the UK has about £1trn in personal and workplace DC arrangements. The sustainability or adequacy of pension promises is much clearer with funded arrangements. Regular statutory actuarial valuations (for example, every three years) reveal surpluses or deficits and appropriate action can be taken.

Complete sponsor failure is rare, but corporate insolvencies such as Kodak, Nortel and BHS illustrate the scale and significance of private sector pension debts. Public sector insolvencies are less common but have occurred in several US cities.

When not assessed on a cashflow projection basis, unfunded schemes are evaluated in a similar manner to funded schemes, by calculating the value of accrued liabilities and the cost of each year's future build-up of liabilities, using a discount rate to convert future cash flows into present values. As for funded schemes, the higher the discount rate, the lower the value placed on the liabilities. The cost may seem notional because there is no physical fund, but the discount rate affects the derived cost of benefit provision, which can influence whether the benefits are deemed to be affordable.

This is an important issue, since benefit expectations build up and politically are very hard to change, whether in respect of commencement age, eligibility or amount. Actual benefit reduction or changing expectations are as difficult as raising additional tax. 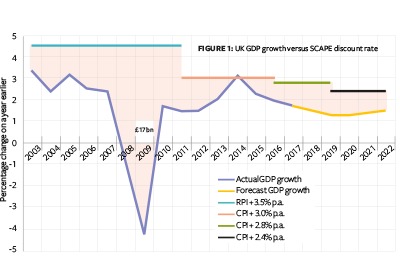 As an example, unfunded UK public service benefit liabilities are calculated using the SCAPE discount rate, which is set as the assumed growth in gross domestic product (GDP). With pension liabilities growing broadly in line with the UK economy, affordability is thereby assumed in the long term, although the incidence of contributions and benefit payments is also dependent on demographic trends.

Over the last 15 years, the current SCAPE discount rate has been gradually reduced from Retail Prices Index (RPI) + 3.5% per year to the current assumption of Consumer Prices Index (CPI) + 2.4% per year (Figure 1). It can be seen that GDP growth has been consistently less than the SCAPE discount rate and is forecast to continue to be so; the projected shortfall is many times the size of the £17bn square shown on the graph.

With £1.7trn of unfunded public sector pension promises, a shortfall in GDP growth of 1% in a year compared with the SCAPE discount rate equates to £17bn. This implies a massive additional burden on future generations, while continuing generous future service benefits only increase the problem of these 'other national debts'.

Public interest or awareness in a country's unfunded pension promises might be increased by comparison with the annual issuance of government debt.

The promise to repay an index-linked UK government bond currently yielding RPI less 1.5% per year can be legitimately compared to the annual build up of future service unfunded pension liabilities (deferred pay for 5 million voters) yielding CPI + 2.4% per year.

Such promises in 2018-19 were of the order of £22bn and £37bn respectively. I believe such issues need wider debate.

Allan Martin is director of ACMCA

This article appeared in our May 2019 issue of The Actuary.
Click here to view this issue
Filed in:
05
Topics:
Pensions