Stemming the sands of time

Jason Whalley discusses what a cure for ageing could look like and what the implications could be. 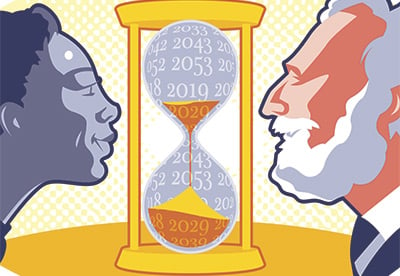 Jeanne Calment met Vincent Van Gogh in 1888 and lived a long life in France until 1996. The late supercentenarian still holds the record for having the longest confirmed lifespan of any human - and is the only verified person to have lived for more than 120 years.

Why her? What did she do differently? It may have been a roll of the dice - though reports of a balanced diet, regular exercise and a stress-free life provide some clues.

Juan Ponce de León traversed the globe in the 16th century searching for the legendary Fountain of Youth, but ultimately didn't reach even 50 years of life before passing. A cynical mind might declare this undiscovered locale to be a work of fiction, and immortality a myth. It certainly is a long-unanswered question, though: how to live forever? The obvious truth is that we do not know - but it is naïve to say that we will never know.

Though the answer is unlikely to lie at the bottom of a fountain, it could be unlocked through a greater understanding of physiology. What would a 'cure' for ageing actually be? The modern equivalent to the Fountain of Youth, at least to begin with, would be a slowdown of cell decay.

Recently, the ageing of DNA in mice was successfully reversed, with researchers claiming to be able to keep their cells young. Although how this could apply to humans remains to be seen, it is a direct intention to attempt to limit the effects of ageing.

So what does this mean? It could simply lead to lower mortality rates, with all else unchanged - average life expectancy increasing, but quality of life remaining the same. This could lead to increased pressure on younger generations, who would need to look after the elderly for longer. With individuals learning for the first 20 years of their lives, working for the next 50 and retiring for the final 30, could global economies afford the increased healthcare, general upkeep and long-term care costs? The retirement age may need to continue increasing alongside longevity.

Alternatively, life expectancy could remain broadly unchanged, but treatment could drastically reduce the effects of ageing and the associated detrimental physical effects suffered by older people. In this scenario, with a person aged 80 physically no different to someone aged 40, retirement could be unthinkable to some. A larger working population and a smaller amount of people to support could theoretically see economic output soar; alternatively, with a greater number of people looking for employment, competition for jobs could become even fiercer.

Ultimately, the choice between these two scenarios doesn't matter; anyone and everyone would jump at the chance for either option. Fortunately, how we adjust is also up to us. However, there's no telling how long it would be before such societal and cultural changes were taken seriously.

An extended life is vastly different to an unlimited life. Would a 20,000-year-old person worry about committing a crime if the result was a 20-year sentence? On the other hand, a 10,000-year-old person could spend thousands of years on research, taking humanity further than our wildest dreams.

Given the choice, should we even be able to live forever? Valar morghulis, as they say in Game of Thrones: all men must die.

This article appeared in our August 2018 issue of The Actuary.
Click here to view this issue
Filed in
08
Also filed in
student