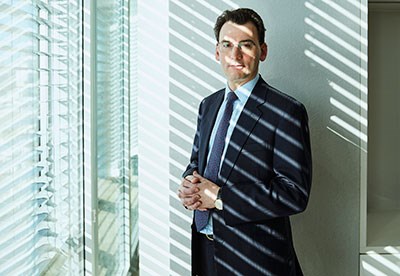 Mark Azzopardi, managing director and head of insurance client strategy at BlackRock, has had a varied career in investments, pension consulting, general insurance and banking.

Of his current role, he says: "My team's job is to ensure our investment ideas are suitable for insurance companies, and if not, to either tailor them or build suitable investment strategies that are fit for purpose. Many of the larger insurers do business around the world, so for efficiency our team operates on a global basis."

More broadly, on the relationship between insurance clients and asset managers, he adds: "Generally, because of insurers' sophistication with investments, it tends to be more of a partnership than an outsourcing approach. In some cases, insurers are simply looking for the implementation of an investment strategy they themselves have designed. They know what they want and may even be able to implement and manage it themselves, but we may be able to do it cheaper by delivering scale and cost efficiency."

He explains: "In other cases, we may have better access to a particular investment, such as social housing or infrastructure bonds." These are two examples of asset classes that insurers are increasingly investing in, as the low-interest-rate environment drives them to search for better yield. As Azzopardi describes: "Increasingly, insurers are looking for our knowledge of the non-core asset classes, an ability to explain the sources of risk and return, to help build the governance process which allows them to demonstrate to the regulator that the risk is under control, and in some cases to help build quantification of that risk into their own internal models."

On the diversity of insurance companies, Azzopardi says: "Pretty much every insurer is in some way different from any other, so it's difficult to build products and services that are standardised. Hence it's hard to achieve scale."

One example is the extent to which an insurer prefers income over total return in its investment mandate. Azzopardi explains an income preference can stem from the nature of their liabilities, such as continental European with-profits or UK annuity business, or from a desire to stabilise reported profits under local accounting rules when these are book (or redemption) yield-based.

"Such mandates have become increasingly common with insurers over the past few years," he says. "Another trend has been the move to lower turnover mandates since the financial crisis. Part of the reason is that fixed income market liquidity has deteriorated, increasing the cost of trading. So you need to have more conviction in your trade ideas in order to justify the cost."

Insurers also vary in how they measure the performance of their asset managers. "Measuring returns against a benchmark is always a metric insurers will look at, but there will be a whole series of other metrics, some particularly tuned to book yield investors such as management of credit downgrades and defaults, or what the value add has been from trades undertaken," Azzopardi explains.

He adds that softer things also come into the evaluation mix:

"Many insurers recognise that their portfolios are sometimes so constrained that it's hard to make significant excess returns. These insurers also tend to look at the way in which the asset manager reports, the access it gives insurers to market information and the speed and quality of client service. All these things quite often appear on what we call a balanced scorecard."

We turn to the challenges faced by insurers. Azzopardi says: "Their biggest concern globally has been the low-rate environment. It has challenged many business models on the unit-linked side, especially where investment guarantees are offered. Insurers have also needed to adapt their investments to continue to support the back book of liabilities, whether that's annuities or with-profits." He adds: "Insurers have largely kept faith with the types of risk they know best - interest rate, credit and illiquidity risk - but have broadened the ways they access these risks."

In Europe, diversification away from domestic government bonds has occurred for varying reasons. For example, in Germany it is because they currently yield very little, whereas in Italy it is because insurers were holding too many owing to the high yields they previously enjoyed. A further issue for non-life insurers is that premium rates are lower than in the past, especially in the property business. Azzopardi elaborates: "Non-life insurers have realised the need to rely more heavily on their investments in order to be profitable. In addition, especially since the implementation of Solvency II, many have increased duration to be better matched to their liabilities."

He observes that the introduction of Solvency II has had a relatively smaller impact in the UK than elsewhere in Europe, since the prior UK regime was broadly similar. On the other hand, many other countries have been significantly affected as they did not previously have risk-based capital requirements. This has led them to substantially reduce their duration gaps as well as to diversify into new asset classes.

On the importance of technology in asset management, Azzopardi believes it provides the ability to deliver products and services at scale, and to create information that provides insights into how to improve an investment process. For example, BlackRock uses technology to analyse the huge  amounts of information embedded in broker reports and a variety of market statistics in order to gauge market sentiment. Azzopardi says: "As investors, insurers are probably more focused on risk than many others, not least because they have to put capital up against the risk. We have embraced technology to deliver pertinent risk information efficiently, not just to our own portfolio managers but also to our clients. We sell our risk, trading and compliance platform to third parties: we've turned risk management into a profit centre rather tolerating it as a cost."

"Technology is a great thing, but it's important to remember it is a means to the end rather than the end. With the continuing and significant improvements in computer processing power there is a temptation to produce information just because you can, rather than because you ought to." He adds: "It is important to be able to guide the design process, so you're getting useful information out of technology rather than just noise. In other words, quality rather than quantity. I think that actuaries tend to have the right skill set for this kind of thing."

Azzopardi also sees technology as one of the drivers for change in an uncertain world: "Technology impacts everything, from manufacturing processes to the jobs we do as investors." He adds: "We need to be cognisant that the world is changing around us quite quickly. You need to have a plan, but also be ready to update it when the facts change."

He cites rising interest rates and the gradual withdrawal of liquidity as potential challenges for investors; in addition: "The balance of world economic and political power is changing. Many of the institutions that govern the way politics and markets work were designed under the old order; who knows how they'll survive in the new order?"

Azzopardi has certainly embraced change in his career. He started work in 1988 and qualified as a pension actuary in 1991.

In 1994, he was part of the first phase of actuaries moving into the Lloyd's of London market at a critical time. "The market was desperate for capital and there was a need for people who could analyse the information supporting capital raising at Lloyd's syndicates. Insurance has stayed at the core of what I do ever since, but I've moved into jobs which give me a different and broader perspective. I decided on a plan; I knew I wanted to go into banking, to see insurance through a banking lens, and I was able to achieve this by setting up an insurance securitisation business at BNP Paribas." His next step was to see insurance from an asset management lens, spending two years at AllianceBernstein before moving to BlackRock about eight years ago.

On working in wider fields, Azzopardi comments: "An actuarial training provides a useful toolkit for working in a variety of environments and opens many possibilities. My job doesn't need an actuary to do it; I think that's a good thing because it shows that actuarial skills are transferable to wider fields."

When it comes to planning a career, Azzopardi advises: "Follow your heart. Work can be tough if you don't enjoy it, especially in today's high-pressure environment. So be passionate about what you do and always do it to the best of your ability. This approach hopefully makes it much more likely that someone will be willing to employ you to benefit from the skill set you have!"

This article appeared in our May 2018 issue of The Actuary.
Click here to view this issue
Filed in:
05
Also filed in:
Interviews
Topics:
General Insurance