The current pace of change in regulatory and accounting standards makes now a better time than ever for firms to revisit their asset liability management strategies, argues Richard Schneider 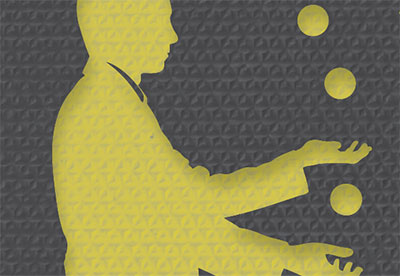 Fifteen years ago, The Actuary asked its readers who was the greatest British actuary of all time, and the answer they gave was Frank Redington, most famous for development of his immunisation theory in 1952. This theory enables holders of long-term liabilities to protect the value of their portfolios against small and 'well-behaved' movements in the interest rate term structure. Since then, asset liability management (ALM) has grown into a multi-faceted operation, with specific risk appetite, operational processes and organisational structures being developed to accommodate it. The growth in this field has been driven by a number of factors, including:

Easy to define, hard to specify

ALM can be defined quite simply as the management of risks that arise because of mismatches between assets and liabilities, as opposed to the pure management of asset-side risk. Pretty straightforward, isn't it? Maybe not. Satisfying all of an organisation's stakeholders simultaneously involves a careful juggling act, whereby different risk exposure measures, or 'target metrics', need to be considered together as part of a holistic ALM optimisation strategy. Each flavour of risk will have its own exposure limit - whether explicitly defined to date or not - and will rely on ALM to stay within limits. With the plethora of regulatory, accounting and internal performance measures, trade-offs must exist, and, with the introduction of new solvency and accounting regimes, there is additional complication around potential step-changes in ALM strategy and the timing thereof. Clarity of strategy, as always, is key.

Example 'candidate metrics' for optimisation of the ALM strategy include, among other things: solvency surplus (or ratio), economic value, accounting surplus and liquidity buffer (short-term and long-term). This is not to suggest that regulatory arbitrage is a good thing, but, naturally, the chosen hedging metric will depend on the organisation's 'biting constraint'. A firm that has a healthy regulatory solvency ratio and is awash with cash may adopt a policy of stabilising its economic or accounting profit. However, if the solvency or cash position deteriorated over time, the focus would shift towards improving, or at least stabilising, those metrics, with some level of volatility in economic or accounting profit being accepted.

While most long-term providers are averse to ALM risk, not all metrics can be hedged simultaneously, hence the real issue is the priority ordering of these metrics and how these might change over time. Firms are likely to alter their priorities over time, as circumstances change, hence a dynamic strategy exists whether or not it is hard-coded into formal policies.

Suppose, instead of a static strategy (such as 'Stabilise metric X subject to minimum value of metric Y'), we considered multiple metrics together. Regular ALM interest rate reports might look something like those in Figure 1 below. This reveals the durations at which hedging gaps exist, for all metrics of interest. Now how does the firm know at what point to change its focus from one metric to another? Would a change occur once some trigger level was hit, or would the transition be managed in an orderly way as triggers were approached? It doesn't hurt to consider these types of issues upfront. Clearly, it won't at present be possible to produce accurate solvency-related PV01 metrics at the required frequency, particularly where Monte Carlo capital models are concerned. In these cases, approximations would be required, and various techniques are available for this purpose.

Without trying to 'algorithmise' away actuarial judgment, consider a thought experiment in which we derive and hedge an 'average exposure' vector:

c is a vector containing weighted averages of the PV01s across the different metrics, for each duration bucket

A is the matrix of PV01s, of which the table below is one example

Such an approach could be calibrated to give smooth ALM outcomes.

The difference a year (of management actions) can make

One of the 'conflicts' highlighted above is that between solvency and economic value - but why does 'economic' hedging not protect the firm's solvency position? This seems counter-intuitive. We consider a hypothetical case study to provide some insight into this conundrum.

Let us suppose that a company, GuarCo, sells insurance products with embedded investment guarantees. It has no appetite for market risk on this line of business; however, it wants to reach a reasonable balance between hedging cost and benefit. GuarCo has a very satisfactory regulatory solvency position, and has ample cash buffers in place. Its ALM strategy is to protect economic value, subject to a minimum regulatory solvency surplus, and it implements a daily delta hedging programme, involving execution of the following steps:

Figure 2 below illustrates the convexity of the liabilities (for an assumed liability profile) and, in particular, the behaviour of delta along the moneyness spectrum. To carry out its stated ALM strategy, GuarCo hedges its base delta. All is well initially; however, in the second year of the programme, there is a steady fall in asset values, and GuarCo finds that its regulatory solvency surplus is in steady decline. The delta hedging programme is investigated, and it is found that this has in fact performed as expected, with the economic value surplus of GuarCo being relatively unaffected by the fall. 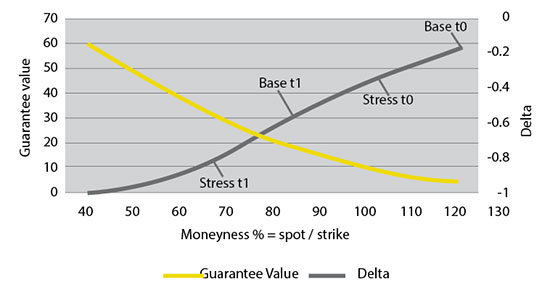 So what has gone wrong? It seems the issue is that the delta of the stressed liabilities, which underlie the solvency calculation, is lower than that of the base, hence market movements have had a disproportional impact on the solvency position. This has been exacerbated over the period of the fall, as this delta 'basis difference' has grown, owing to the inflection point in the delta curve.

As the regulatory surplus has now reached a trigger point in terms of the ALM policy, GuarCo moves to an approach of hedging its regulatory solvency surplus. It increases its (absolute) asset delta significantly, in order to ensure that it is the 'stressed balance sheet' that is now being hedged.

All is then well for the next year; however, GuarCo notices that, although its regulatory solvency is relatively stable, its economic value is volatile. The finance director is concerned that the company is not in a position to benefit from a market recovery in the way that its competitors are - quite the opposite, in fact. Now the firm is in a real quandary - while focusing its ALM efforts on restoring its solvency position, it could well be leaking economic value. The finance director proposes a capital raising initiative in order to restore its solvency position and enable it to move back to economic hedging.

This situation, although a little contrived, illustrates the challenges of trying to hedge numerous metrics simultaneously.

Many would leave the argument there, but we take it one step further. What is the real reason that hedging economic value leaves the solvency position unhedged? Is it to do with convexity of the liabilities? Does it depend on the internal model calibrations? Yes, partly, to both. However, there is a more fundamental issue, relating to a modelling limitation - the capital model approximates a one-year value at risk calculation by applying an instantaneous stress to the balance sheet. This is not unusual - most Solvency II internal models have been built in this way - not to mention the standard formula. And getting the models past the post in the run-up to Solvency II precluded the possibility of adding extra complexity to the modelling framework. The implication of this common model limitation is that no credit is obtained for dynamic hedging - hedges are effectively treated as static over the one-year time horizon. If the modelled stress scenarios emerged over the time horizon, rather than instantaneously, and were coupled with the modelling of ongoing hedge rebalancing, the 'value versus capital' issue would be significantly mitigated.

Modelling the dynamism would require an assumption about market movements over the period - that is, an economic scenario generator (ESG)/ stochastic time series approach replacing a pure statistical distribution of returns. Such an ESG could be calibrated to preserve - to the extent possible - the one-year statistical distributions of the capital model. The focus of model validation would then shift to the reasonableness of the underlying stochastic processes, whether they contain sufficient jumps in economic variables, whether demographic assumption changes can be anticipated gradually over the period, and so on. The benefit, however, is that a 'sensible' hedging strategy, and one that broadly hedges both economic value and the regulatory balance sheet, can be adopted.

This same logic, sadly, cannot be extended to all potential target metrics of interest, hence does not solve the general problem of multi-metric optimisation.

This article appeared in our May 2018 issue of The Actuary.
Click here to view this issue
Filed in:
05
Also filed in:
General Features
Topics:
General Insurance