Anthony Painter talks to David Boland about universal basic income and how, given a sense of freedom and security, people can take decisions that are right for their lives 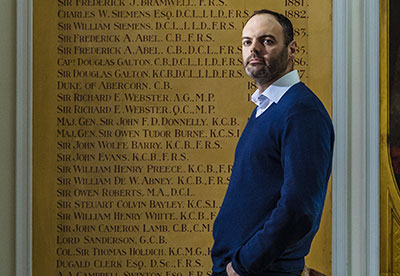 Anthony Painter is director of the Action & Research Centre at the Royal Society for the encouragement of Arts, Manufactures and Commerce (RSA). The RSA has three main areas of research interest - economy, education and public services and communities.

I meet Painter at the RSA's offices just off the Strand, where, in the shadow of the series of paintings by James Barry, depicting 'Progress of Human Knowledge and Culture', he outlines his vision for the new social contract.

Universal basic income in a nutshell

I begin by asking him to describe universal basic income (UBI).

"Universal basic income is the idea of giving everyone who is a citizen an individual and regular payment to meet their basic needs, without conditions attached," he says, explaining that the idea has already been trialled in Alaska and Manitoba.

"The Alaskan case was an unanticipated basic income experiment that was brought about because of a Sovereign Wealth Fund they established in the early 1980s," he says, adding that every individual, including children, gets an annual dividend of $3,000. The amount varies from year to year, depending on the growth in the fund.

One of the criticisms levelled at it is that it would lead people to exit the labour market, but recent research has shown that it has had a negligible impact on rates of employment.

Painter points out that: "It has been different in different sectors. What it found is that in the tradeable sector, employment has gone down, so you can see how capital investment might replace work in that sector, but in a non-tradeable sector, which is influenced by domestic demand, actually employment rates have gone up."

He reasons that this is because people have money in their pockets, so they are spending it on local business goods and services, and local firms are then hiring more people and creating work opportunities. Alaska, for example, has gone from having one of the highest levels of inequality in the US to the lowest, and there has been measurable impact on wellbeing, with very low levels of personal indebtedness.

This can also be seen in the Canadian example: "The theory here is that students found they could stay on at school and didn't have to get a job immediately, and that starts to influence their peer group, so there is a positive network effect. Some trials did show that there was a decline in working hours, but this may also have been down to under-reporting, as if you report your earnings you have less cash."

I ask if this system could work in the developing world. "It has been working and, if anything, the effects have been even greater," Painter says. "There have been trials in India with some unanticipated benefits. Women started to work, and, because they had independence, started setting up corporate enterprises and being entrepreneurial."

Similar progress was seen in Namibia, and trials were undertaken in Kenya undertaken by an aid agency called GiveDirectly. "The reason I think these trials are so positive is because they give a base level of security, and that enables people to make better decisions. By reducing insecurity, people are able to make a more positive contribution and enjoy better wellbeing."

I ask Painter about the funding for this. "We have been giving this a lot of thought as you'd expect," he says. "We don't think you should lean very heavily on the income tax system other than for high earners. We should have a progressive income tax system is how I would put it."

He continues: "What we've proposed is that you would endow a fund and you could take advantage of low interest rates in the gilt markets in order to raise £200bn. You'd put that into an endowment fund and invest in global equities and partly in domestic infrastructure, so you could invest in housing, energy and get a 'patient' interest return that could be more significant than the base rate that you'd pay on the money that you'd borrowed.

"You'd then look to build up that fund over time, through returns. For example, the Norwegian sovereign wealth fund gets - after inflation and management fees - 4% a year, which is obviously significantly more than the interest that you'd pay on the endowment. But, obviously, you'd look for other sources of revenue. You might look at some wealth revenue; you might look at some wealth taxation or corporate levy."

Painter goes on to explain that the aim is for a fair redistributable system that will make a difference: "We propose you start off with two years of basic income in any 10 years. People take those two years at a time of their choosing to help them change streams of work, reskill, set up a business, help with carer's responsibilities, and so on. We estimate that will be £5,000 per person, per year, for those two years. To fund that system, you need an average outlay of, say, £15 billion per year. But your return on that, if you achieve Norwegian levels of return, would be about £7 billion a year."

I ask if this would be the case, if and when, even in the short term, interest rates go up?

"Then it would be less, of course. And that cost would be factored into the system and the endowment would have to pay back the interest on the public debt," he says, "otherwise it's debt, and not debt with an asset attached." This essentially resembles a defined benefit pension fund, and some of these are not currently performing well - so I ask how he would keep this in the black.

"We've got a four-year period where it will only be available on a lottery basis to 25% of the UK population, so endowment is from the beginning but if the outflow was too great or if it was too frontloaded you could start to cap the outlay."

What would happen if the fund goes bust? "Well, I think we are into a different realm then. I like the idea of the fund capturing common assets and redistributing wealth to fund decisions on how they make a contribution. So with the fund being linked to working age and then pension age you would fund it through the tax system as you currently do."

I ask at what level the wealth taxation would be set. Painter says we should look at net assets of about £750,000. "Your readership would be appalled," he said, "and Londoners will raise an eyebrow."

I question whether this would take pension savings into account.

"I'm undecided on that," he says. "I think you'd have to consider pension savings over a certain level, not pension savings at a low level, so net assets overall. You could look at equity holdings, which would include some pension savings and some housing equity but over a particular level. But if you tax that at a fraction of a per cent you'd still raise a few billion.

"There are two elements of our current social security system that most closely resemble the UBI," explains Painter. "That's child benefit and the basic state pension. What UBI does to the state pension is universalise it, so you don't have to have made your 30 years of contribution. Cosmetically, you might want to keep national insurance in place, but, in reality, you are combining the tax benefits.

"The wealth fund will finance the basic opportunity dividend that we propose, but, longer term, UBI would be paid out at differential rates depending on age. It might be paid out at a higher rate for children under five; then maybe a rate that's less than that between 5 and 18, and maybe it would increase slightly between 18 and 65. By the time we retire, it would go up to match the level of the current basic state pension. Most models allow for that because that mirrors some of what the current system does and how it operates."

I ask him about private pension dove-tailing, and ask if he could briefly give us advice on how we design pension products for UBI? "There is quite a lot of psychological evidence that people think in short-term ways when they are in a situation of anxiety or insecurity. Given that UBI is designed to create a bedrock of security, you can see people not only taking more risks because they have a secure base but maybe thinking longer term in their financial decision-making as well."

He explains that in terms of the design of private pension products, it goes back to the diversification of work and thinking about products that are more variable, to kick in and out at different ages in accordance with different work and accessing it as of need. So I ask if the idea is that we actually retire the word retirement. Do you think this will lead to better health in retirement?

"Yes, because the more security you have, the more you have something that gives you a firm basis on which to make a range of decisions about your life, and that applies in old age too."

We change tack to discuss artificial intelligence. Painter is convinced that there will be a massive shift in the workforce. "What I don't buy is the predictions of mass unemployment because of automation. Work will be redistributed in different ways; there will be a spread of sporadic work, which will also enable people to work well into their 70s and 80s if they want to. Basic income gives people some degree of choice to work where it interests them and gives financial support in retirement."

With Brexit affecting labour mobility, I ask whether this will be an additional limitation. Painter is unsure: "It depends on how footloose you think international capital is." He reasons that an extra 2%-3% on corporate taxation would not be the marginal decision resulting in location shift decisions. He also moots a levy on the transfer of data and states. Regarding the subjects of the levy, he says: "It doesn't matter where people are headquartered, the whole purpose is if they have a presence in this jurisdiction," he says. Painter believes that firms need to have a presence in the UK, because they have to sell and deliver goods or services and that then won't make any difference to the sustainability of UBI.

A future for actuaries

Painter cautions that, similar to trading algorithms, we could see risk algorithms working their way into actuarial work. "There's a human designing what the overall architecture is, but the actual processes are often completely automated." He believes with risk assessment being informed through the manipulation of large data sets, large amounts of that could be automated. "Which might free up some actuaries to do some strategy and less of the donkey work," he says.

He cautions further that: "The strategists of the future are the analysts of today. There's no doubt that the work of an actuary is going to change in form and structure; it is one of the professions where you can see the impact of automation. Whether that means less work or better work depends on the decisions that actuaries themselves make."

This article appeared in our April 2018 issue of The Actuary.
Click here to view this issue
Filed in
04
Also filed in
Interviews
Topics
General Insurance