Tim Bateman and Stuart McDonald discuss UK government proposals, subsequently abandoned, to permit those in receipt of annuities to sell them to third parties 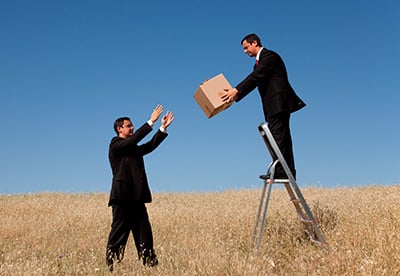 When UK law changed in April 2015 to no longer require members of defined contribution (DC) pension schemes to purchase annuities at retirement, the government consulted on a proposal to extend such freedom by allowing existing annuitants to sell their future stream of annuity income to a third party through the creation of a secondary annuity market (SAM).

In response to the consultation, the Institute and Faculty of Actuaries set up a market research scoping group, of which we are both members, which decided to:

Lessons from other markets

Australia's DC pension market has resembled the post-April 2015 UK model for some years, although they have no SAM. Only 2%-10% of retirement funds are annuitised, with the rest taken as lump sums or income drawdown. Traded endowment and life settlements (whole of life) secondary markets have existed in the past.

The US has a thriving secondary market in structured settlements (temporary income awarded as a result of an accident) and lottery wins, sometimes paid as income for a few years. There is also a large life settlements market, now very popular after a slow start.

The UK has had a traded endowment policy market since the 1990s but, since many of the policies were issued in the 1980s for a 25-year term, the supply has now mostly dried up.

For a time the market was buoyant, especially after life companies were required to tell surrendering policyholders that there was a secondary market option. Transparency and access to the market were improved by the availability of an online platform.

A number of possible lessons can be learnt from other markets with regard to SAM and we consider some of these here, should a market have been allowed to develop.

The lure of lump sums is powerful, potentially leading to poor outcomes, as annuitants find it difficult to assess what represents reasonable value for money. Furthermore, retirement savings may be diverted from their intended purpose towards bequests or the housing market.

It would be important to ensure that annuitants and buyers are properly informed, but consumers may be unwilling to pay for advice or unable to access it. Advisers must be attracted to the market, with a clear role and responsibilities, and not be put off by the risk of future mis-selling claims. Transparency of fees would be important.

Costs should be minimised as otherwise the market will only work for very large policies. It might have been advisable to have a simplified approach for smaller annuities, such as a 'no advice' requirement, so they could be cost-effectively traded.

An online portal or clearing house could be set up on an industry-wide basis. A common application form across the industry would be helpful, like the common quotation request form used in the enhanced annuity market.

It might have been advisable to allow annuity providers to pay a 'surrender value' themselves, and if so they should have been required to alert policyholders to the existence of SAM. Finally, providers would have required a cost-effective way to find out whether the original annuitant remains alive, for example access to a central death register. 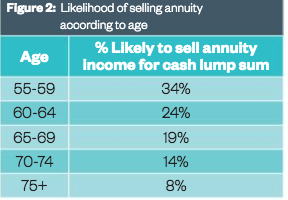 In February 2016, YouGov conducted online interviews with 2,017 annuitants aged 55 or older. The average pre-retirement pension pot of those surveyed was £68,600, with an average monthly annuity of £360. Half had a spouse or partner named as a beneficiary. Over three-quarters had two or more other sources of income, with half having access to a defined benefit (DB) pension.

Two-thirds said they felt financially secure for the future, but only one-third felt that the income from their annuity was central to that security.

Two-thirds claimed to be aware of the proposed changes. They were more likely to say the proposals seemed a good idea in general rather than for their own circumstances.

About 20% claim they are likely to take advantage of SAM, the likelihood of doing so increasing among the younger age groups, the less financially secure and those receiving smaller annuities.

Appetite for independent financial advice in relation to SAM was mixed, with 46% indicating 'no' or 'don't know' when asked if they would take such advice. Those who were most likely to sell their annuity were less likely to take advice. Respondents would be prepared to pay, on average, £162 for advice.

Respondents felt the most helpful information would be to receive a statement of indicative value of their annuity from their provider.

On average, respondents expected to receive 94% of their total expected future payments if they were to sell their annuity using SAM. 26% would be prepared to share their doctor's records and a further 25% would be willing to undergo a medical examination in order to prove the state of their health.

Respondents' average estimate for life expectancy at age 65 was 16 years for a male and 20 years for a female. This compares with cohort life expectancies for UK males and females aged 65 of 22 and 24.5 years respectively (ONS principal projection 2014).

Only 7% of annuitants who additionally receive income from a defined benefit scheme, or expect to do so in the future, would be interested in selling their income from that scheme.

Our research uncovered some causes for concern, which we shared with government and the regulators. The lure of a cash lump sum may have lead to poor outcomes, especially where advice was not taken. Appetite for taking advice is limited and expectations as to the cost of advice may be unrealistic. While there is appetite to sell from around 20% of annuitants surveyed, the amount they would expect to receive may be significantly more than is available in the market. Moreover, those most inclined to sell may be less well suited for SAM, in particular those with small annuities and least financial security. Finally, there is a significant risk that annuitants will underestimate their longevity and hence the value of their income stream, resulting in them running out of money later in retirement.

While some of our concerns were addressed in subsequent consultations, the government finally decided in October not to take forward plans to introduce a SAM because the consumer protections required could undermine the market's development. We were encouraged that among the chief reasons for cancelling their plans, the government echoed our concerns stating: "We are not willing to allow a market to develop which could produce poor outcomes for consumers, such as receiving poor value for their annuity income stream and suffering higher costs." 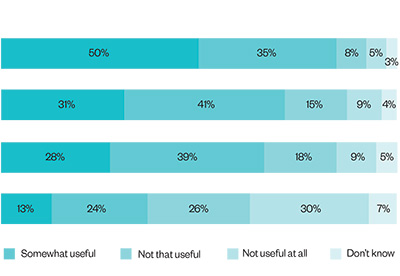 Tim Bateman is a partner at Mazars LLP

Stuart McDonald is head of longevity at Lloyds Banking Group

This article appeared in our November 2016 issue of The Actuary.
Click here to view this issue
Filed in
11
Topics
Pensions