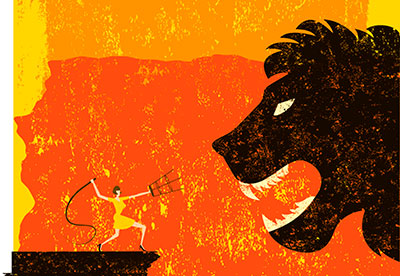 The past 10 years have been a uniquely challenging, volatile and uncertain period for UK defined benefit pension schemes. How well have they weathered the storm? We found out by analysing data published by the Pension Protection Fund (PPF) in its annual Pensions Universe Risk Profile or 'Purple Book', plus other industry-wide data from leading sources.

The asset side of the story, viewed in isolation, seems positive. Total assets have grown from £770bn in 2006 to £1,254bn in 2015, an average increase of around 5% per year, albeit a very significant proportion, possibly 25-45% of the increase, has come from contributions. Over a period that includes several crises, the asset value has had a relatively low volatility (or standard deviation) of about 5% per year.

Total liabilities have grown even faster though, at an average rate of around 7% per year. The increase is from £790bn in 2006 to £1,516bn in 2015 on the PPF's measure (which, for most schemes, caps benefits and pension increases), or from around £1trn to just under £2trn based on full benefits.
Furthermore, the volatility has been about 14% per year, almost three times that of the assets - largely a consequence of plunging yields on British government bonds or 'gilts', which are used as a benchmark for valuing the liabilities.

Asset allocation has changed in two main respects. Firstly, there has been a move away from equities - from 61% in 2006 to 33% in 2015 (see Figure 1 below) - in particular, a reduction
in UK equities. A slightly different dataset published by UBS shows allocations to equities of over 80% in the 1990s, so the past decade is part of a continuing trend.

As discussed later, this has reduced the level of risk, but it has also reduced the expected future investment returns in excess of the liabilities, by around one-third over the decade. The second trend is an increase in the amount of liability hedging.

When long dated interest rates fall or inflation rises, the value of liabilities increases relative to the assets. This can be hedged by investing in matching bonds, but also by entering into derivative transactions with similar economic properties to bonds.

From a risk perspective, the key statistic is the hedge ratio, which estimates the proportion of liabilities that are effectively hedged (or immunised) against movements in interest rates or inflation. Using data published by KPMG in its annual Liability Driven Investment (LDI) Survey, we estimate that the average hedge ratio has increased over the past 10 years from 15% to around 33%.

At an aggregate level, there have been small second-order changes in asset allocation relating to a greater use of hedge funds and other assets, albeit a more pronounced feature in some individual schemes, and fluctuating levels of cash. Holdings in property of around 5% in aggregate are a fairly constant feature. 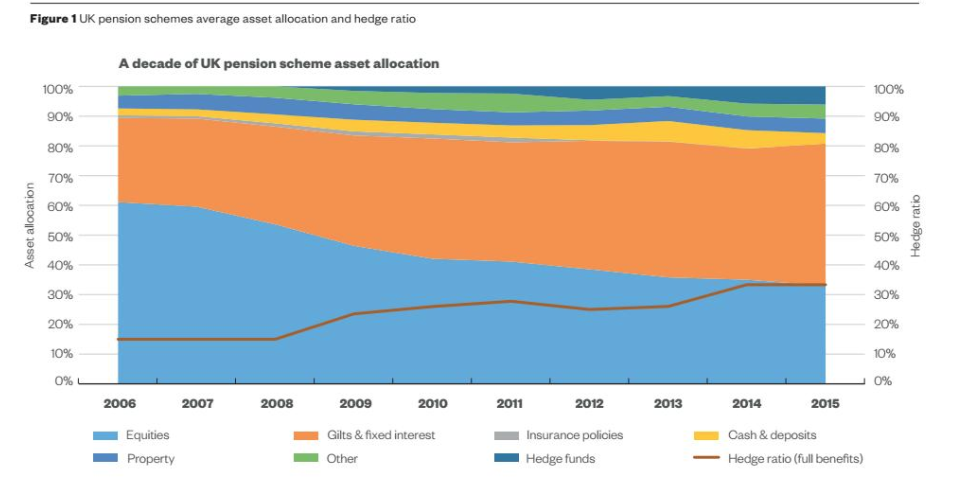 Risk change - a conflicting story
To gain insight into the de-risking effect of these asset allocation changes, we ran the data through our pension risk model. Figure 2 (below) measures risk in relative terms, showing the possible change in funding ratio of assets to liabilities at a given confidence level, often called funding ratio at risk (FRaR) and measured in percentage terms, which is useful to trustees in quantifying how benefit coverage could be affected in an adverse period.

In 2006/07, pension schemes were running an average FRaR of 20%, meaning they had a
one in 20 probability of suffering a funding ratio fall of 20% or more over one year.

As expected, it can be seen that the asset allocation changes implied by the aggregate data (a reduction in equities and an increase in liability hedging) have been risk-reducing, with the FRaR having decreased to about 10% by 2015.

These risk levels may seem large, but, to put them into perspective, over the decade funding levels have twice fallen by more than 20% in a one-year period (according to the PPF's data) - once in the year to April 2009 at the lows of the financial crisis, and once in the year to May 2012 as bond yields fell.

Figure 3 (below) measures risk in another way, in absolute monetary terms, showing the possible change in funding deficit or surplus at a given confidence level, often referred to as value at risk or VaR.
This is often helpful to corporate sponsors in indicating how much the pension scheme could affect their balance sheets.

In 2006, the aggregate VaR was around £300bn, meaning they had a one in 20 probability of suffering a combined increase in funding deficit of £300bn or more over one year (this is based on full benefits rather than the lower PPF measure).

While the VaR is influenced by similar factors to the FRaR, it is also affected by the size of the pension schemes. The overall increase in size of the assets and liabilities overwhelms the de-risking described earlier, resulting in an increase in VaR to £450bn in 2015. Again, putting these figures into perspective, there was one annual period (the year to May 2012) where the combined deficit increased by more than £300bn. 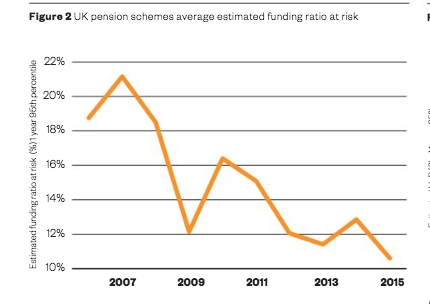 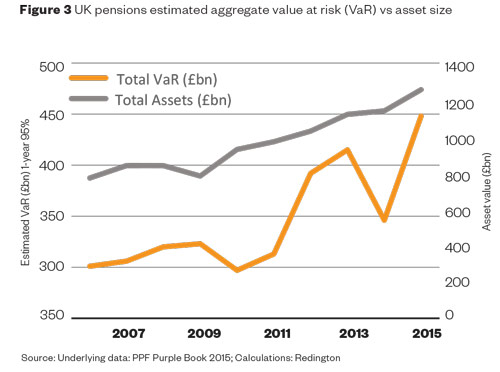 Efficient risk reduction
Will the current asset allocation deliver the returns that pension schemes need to be fully funded? We cannot tell from the aggregate data, as each individual pension scheme has its own specific circumstances, such as funding and investment strategy. We can say that, on average, while funding ratio risks are lower today than in 2006, so are the expected future investment returns.

Many pension schemes want to continue to reduce risk. After all, the risk to the funding ratio described earlier, of 10% over one year, is still substantial in the eyes of the majority of schemes and corporate sponsors. However, they need to generate the same, or increased, investment returns to close their deficits over the next 15 or 20 years.

The solution is to stop viewing investments in terms of fixed buckets of 'growth' or 'matching' assets and embrace modern-day liability management techniques. This includes the use of derivatives to reduce liability-related risks without needing to invest the majority of the portfolio in bonds, thereby enabling the scheme to invest the remainder in a range of return-seeking assets.
Using the principles of diversification, risk control and downside protection, schemes can generate returns more efficiently - that is, for less risk - than has been achieved previously.

Dan Mikulskis is managing director and co-head of asset liability management and investment strategy at Redington Ltd
This article appeared in our May 2016 issue of The Actuary.
Click here to view this issue
Filed in:
05
Topics:
Pensions