Trevor Llanwarne was, until recently, the Government Actuary in the UK. Following his six-year tenure, he spoke to Peter Tompkins as he reflected on this latest phase of his extensive career 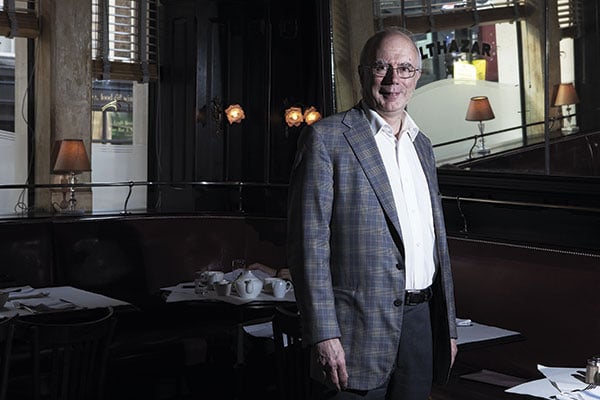 I met Trevor over a very long breakfast to talk about his achievements and challenges in public service, and it soon became clear that he is very proud to be an actuary.

The highlights for Trevor in his career have been the three leaps of qualifying as a Fellow, being admitted as a partner by Price Waterhouse, and his appointment from the private sector to be the government actuary in 2008.

Reflecting on what he had done previously, Trevor drew attention to his imaginative creation of a successful innovative hybrid Small Self-Administered Pension Scheme (SSAS) product at Sun Life, wisely planning the investment of the profits from a large business sale right at the bottom of the stock market in 2003, and derisking of defined benefit pension plan liabilities ahead of the pack at the turn of the century.

During his time at the Government Actuary's Department (GAD) he discharged his professional advice carefully, often with very little publicity, knowing that his role was to advise and allow officials and ministers to take the ultimate decisions - and deal with the public reactions. He was at pains to point out that his work involved analysing and providing options, whilst making it clear where the responsibility lay.

One area of special concern was the policy on selection of discount rate for valuing public-sector pensions. His work in government led him to think a great deal about the social economics of inter-generational fairness in striking suitable rates for planning future pensions and contribution levels.

He was proud to have developed the department and in his view significantly increased influence in government. He believed in focusing on leadership and minimising 'management', doing away with micro-management and 'command and control', too often beloved by professional service organisations.

Trevor comes across as a politically savvy adviser - that is political with a small 'p'. Sometimes it is important to release statutory information into the public domain where it belongs without attendant publicity, especially where poorly informed journalists might get hold of the wrong end of the stick.

Areas he had to be careful with included the quinquennial review of the National Insurance Fund, which is not a fund like an ordinary pension fund, but more a payment mechanism between contributions from employees and pensions to the retired. The long-term actuarial consequences of the 'triple lock' - paying pensioners increases which are the best of prices, wage inflation or at least 2.5% per annum - are significant but very difficult to get across to the public at large, as well as having been politically sensitive to the coalition government.

Astonishingly, we learn that there are over 300 references to the government actuary in legislation, although many come down to the automatic production of actuarial factors. Trevor was a scheme actuary to just one privatised government agency pension scheme, but in practice was actuary to pension arrangements with liabilities exceeding £1 trillion. Most of these were unfunded liabilities, though the former coal industry schemes operate under special legislation where significant invested funds do have returns that impact on public finances.

In practice, there might have been on average one significant report to complete every week during his six years in office, which is quite a workload when one considers the bunching together of the major public-sector pension schemes with identical valuation dates.

Commenting on the professionalism inherent in his role, Trevor drew attention to the contracting-out rebate review, where the reduction in National Insurance for those contracted-out is calculated. The legislation does not require a recommendation from the government actuary. "Making recommendations requires political and social policy considerations as well as technical analysis", he said. Adding that his approach in his work "has generally been to set out the options but stress that a social policy steer from ministers is needed to reach the proper conclusions".

During his tenure, staff numbers in GAD grew significantly - unlike almost all other government departments - and income doubled. This was despite some strategic decisions made to pull out of international insurance regulatory work, which no longer fitted in with a department which had been short of its UK regulatory work to the FSA.

The GAD is still well known for some of its more modest roles - such as checking that the Electronic Random Number Indicator Equipment (ERNIE) randomly selects premium bond winners, or setting the regular limits for income drawdown from personal pension products. But the core of the work is pensions and social security advice to government. Trevor proudly explained how they had retained the Scottish Public Pensions Authority, and won back the Principal Civil Service Pension Scheme .

GAD and the profession more widely had a reputation that had been badly tarnished in the wake of Equitable Life. The confidence of his civil service colleagues had to be renewed. Trevor wanted to be seen as the government actuary not just the government's pensions actuary.

During his time in office he had been working on non-pensions issues, such as risk management, looking at informing government on flood risk, or the risks associated with nuclear decommissioning.

Another area of sensitivity is that of litigation risk in the National Health Service (NHS), where GAD recently won a competitive tender to work for the NHS Litigation Authority.

Trevor's time overlapped almost precisely with the global financial crisis, also giving him the chance to provide actuarial assistance on the loss reserving and valuations of 'toxic assets' held by the Asset Protection Agency.

There is real opportunity for growth in the use of actuarial skills, he believes, but he cautions that some of these opportunities are also for mathematicians more generally. His own contribution to creating that prospect is built around his intention to devote time now in pursuit of the understanding of strategic risk, of which we should hear more over the coming year. We finish our discussion on the future of the profession, where he lays down four challenges.

Trevor is himself engaged in work with five learned mathematical societies to find ways in which they can work together in the interest of society's use of mathematics as a whole. With the London Mathematical Society's 150th anniversary coming up, he sees this as an opportunity for the societies to do more.

There is the sense that Trevor is not going to put down his pen so easily. He is excited about his work on strategic risk and the mathematical societies, but he is also contemplating some non-executive roles that can make use of his skills.

Is Trevor now optimistic for the profession? Not entirely - he is concerned that one unaddressed issue is that actuaries are overpaid for non-reserved role work relative to other equally good mathematical modellers, of whom there are many today. Unless more realism comes into our pricing then the market will allow others to take more of our space. A focus on more diverse membership is, he believes, the way to drive up quality and professionalism throughout industry and commerce, while equalising that price. We look forward to hearing about the next phase of Trevor's career - and seeing how his predictions work out.

This article appeared in our November 2014 issue of The Actuary.
Click here to view this issue
Filed in
11
Also filed in
Interviews
Topics
Professional