As well as the Olympics, east London hosted another globally important event in 2012. This other event was much less reported in fact you might not have heard of it. A major scientific conference Planet Under Pressure was held in March with more than 3000 delegates

I was lucky enough to attend Planet Under Pressure on behalf of the Actuarial Profession as chairman of the Resource and Environment Member Interest Group (REG).  It was inspiring, and by the end I felt more encouraged about the prospects for sustainability than I had for a very long time.  In this article I'll explain why that conference should be seen as part of the ongoing realisation of the grave threat that faces us all, and how the Actuarial Profession can fit into this story.

Recent history of the environment

Science has shown beyond reasonable doubt that the Earth is warming and that this warming is due to human activity.  In the past few years, especially since the financial crisis in 2008, the environment has faded somewhat as a political issue  neither Barack Obama nor David Cameron attended the Rio+20 summit in March 2012.  However, the environment continues to be damaged and the climate continues to get warmer.

While it is not possible to pin any single weather event on climate change, the pattern of extremes in heat and rainfall is exactly what would be expected in a warming world.  So, with record rainfall and floods in the UK, record heat waves in the United States threatening corn harvests and floods in South Russia, why did I leave the conference feeling more optimistic?

Because the first step to fixing a problem is recognising and understanding it.  In my opinion, Planet Under Pressure was a major step forward in bringing together all environmental, resource and demographic issues to recognise the enormity of the challenge we face. 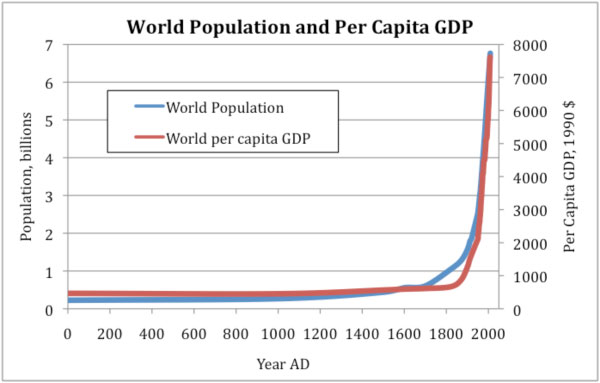 The exponential growth of population and wealth has been made possible by burning fossil fuel.  This has in turn released carbon dioxide into the atmosphere, raising the atmospheric concentration from the pre-industrial 280 parts per million to nearly 390 parts per million today (see chart 2).  Human activity now dominates planet Earth in many ways, and the human impact will be recorded in the rock layer for perpetuity.  Many geologists argue that we have left the Holocene and have entered a new 'Age of Man', dubbed the Anthropocene. 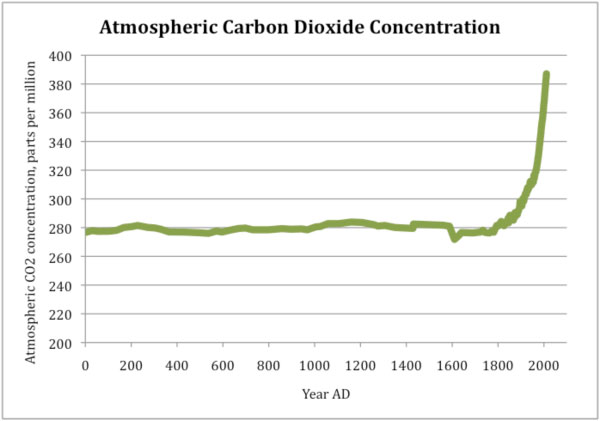 But we live in an exponential world - do we really have a problem?

We see exponential trends in many global phenomena.  Whether such growth should be considered "good" or "bad" depends upon how you choose to look at the data as well as the underlying phenomenon itself.  For example, Matt Ridley's The Rational Optimist eloquently sets out the case for optimism about the future, by focusing on the exponential growth in goods, such as knowledge, technology and wealth and projecting this growth into the future.

So, is there really a problem? One way to answer this is to ask the experts in the field. The Planet Under Pressure conference had an unparalleled concentration of experts in the fields of climate science, food science, water, energy, economics and demographics. The following declaration issued at the end of the conference sums up the overall feeling of those experts:

1. Research now demonstrates that the continued functioning of the Earth system as it has supported the well-being of human civilization in recent centuries is at risk. Without urgent action, we could face threats to water, food, biodiversity and other critical resources: these threats risk intensifying economic, ecological and social crises, creating the potential for a humanitarian emergency on a global scale

2. In one lifetime our increasingly interconnected and interdependent economic, social, cultural and political systems have come to place pressures on the environment that may cause fundamental changes in the Earth system and move us beyond safe natural boundaries. But the same interconnectedness provides the potential for solutions: new ideas can form and spread quickly, creating the momentum for the major transformation required for a truly sustainable planet.

So, the experts believe that we do have a problem  a big problem whose solution requires major transformation.

The realisation that our sustainability problems are all linked came up many times throughout the conference.  Climate change, food supply, overpopulation, water supply, energy constraints, biodiversity loss and resource depletion  all of these problems interact and can only be properly understood when looked at together, as part of the global system.

Another theme running through the conference was the idea that in order to achieve a sustainable society, social science must be linked to natural science, in a two-way conversation.  Natural science must inform economics about the finite limits of the world within which we can safely operate. Social sciences must be employed to generate societal change, as it is not enough merely to provide people with information.

Where does the Actuarial Profession fit in?

Scientists I have spoken to are enthusiastic about what the actuaries can offer.  We are already starting to organise as a global profession with climate change groups being set up by actuarial professional bodies around the world.  The International Actuarial Association has an Environment Working Group, which any actuary can join.
The UK Actuarial Profession has commissioned academic research into how environmental issues or resource depletion might ultimately limit future growth.  This research focuses on areas of greatest interest to actuarial advice, such as the potential impact on investments and financial markets.  The research is expected to be finalised towards the end of 2012, with a launch event in early 2013.

As actuaries we work with data every day.  We are experts in risk and modelling. And we are fairly used to giving bad news!  Add all these things together and we are ideally placed to help communicate the scale of the problems to the general public, and also take a leading role in finding solutions, particularly in building a more sustainable financial system.

The Anthropocene Age: http://www.anthropocene.info
Future Earth project: http://www.icsu.org/future-earth/home
The Royal Society 'People and the Planet' report: http://royalsociety.org/policy/projects/people-planet/
This article appeared in our August 2012 issue of The Actuary.
Click here to view this issue
Filed in
08
Topics
Environment