On 21 March 2012, the European Parliament's Committee on Economic and Monetary Affairs (ECON) voted to agree its position on the Solvency II Omnibus II text.

A key aspect of the 'compromise package' - relating to the extrapolation of the risk-free
rate curve for Euro-denominated liabilities - will create signifi cant challenges for hedging.

The ECON proposal is as follows:

For an insurer wishing to minimise balance sheet volatility, the proposals produce unstable and unintuitive hedges for liabilities beyond 20 years. One reason is that the extrapolation methodology itself creates an artificial exposure to the slope of the market swap curve preceding the entry point into the extrapolation.

There are different considerations to be borne in mind for liabilities falling due before and after the entry point into the extrapolation.

For liabilities that fall due before this point, the Solvency II hedge lines up closely with the equivalent market consistent hedge. This is because the risk-free rate curves are effectively the same under both frameworks.

For liabilities falling due after this point, however, the situation is quite different. 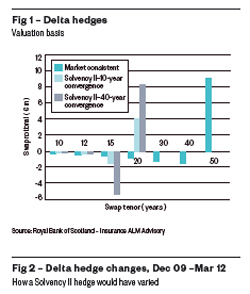 There is a material change in the delta hedge when we move from a market consistent framework to Solvency II.

First, we see that the Solvency II hedges do not include any swaps beyond 20 years. This is because the long-dated liability is valued using an extrapolated curve that completely ignores market swap rates beyond this point.

Second, the Solvency II hedge comprises a long position in a 20-year swap and a short position in a 15-year swap. This is in stark contrast to the intuitive hedge under a market consistent framework, where the hedge is essentially a long position in a 50-year swap. The reason for this is that the 50-year point on the Solvency II discount curve is highly sensitive to the slope of the market swap curve preceding the entry point into the extrapolation, for instance, between 15 and 20 years. This sensitivity increases the longer it takes for the extrapolation to reach the UFR.

Third, the volume of swaps needed to hedge the long-dated liability reduces significantly under Solvency II, particularly when there is a short convergence period (such as 10 years). This is owing to an effective shortening of the modified duration of our long-dated liability.

Why is this? Solvency II uses market rates up to 20 years, converges over a short period to the UFR and then forward rates remain fixed at that level thereafter. So a 50-year liability looks and feels more akin to a 20- or 30-year liability in terms of interest rate sensitivity. This is demonstrated in Table 1, which shows how the 'PV01' (change in value of liability due to 1bp parallel shift to swap curve) and modified durations change when we move from a market consistent framework to Solvency II.

It is interesting to look at a back-test using historical data for the market swap curve between December 2009 and March 2012. Figure 2 shows how a Solvency II hedge would have varied over this period (assuming a 50-year bullet liability of 10m, a 10-year convergence period and monthly rebalancing).

The Solvency II hedge (comprising a long position in a 20-year swap and a short position in a 15-year swap) is considerably more volatile over time than the market consistent hedge.

The delta hedges we have looked at are designed to stabilise the balance sheet for small movements in interest rates. As demonstrated by our back-testing analysis, while this may give acceptable results in a market consistent framework, these hedges do not appear sufficiently robust under Solvency II.

Further, there is the added complication of managing the trade-off between capital stability and capital minimisation. The SCR standard formula requires the insurer to stress its balance sheet against much larger changes in interest rates, and it also makes an implicit allowance for a change in the level of the UFR via the tapering of the interest rate stresses at the long end of the curve.

Consequently, insurers will have to look beyond traditional delta hedging techniques when designing and implementing hedges to safeguard their Solvency II balance sheets. This may necessitate stress-testing thebalance sheet against more severe changes in interest rates and consideration of options based strategies.

Lastly, it is important to bear in mind that there may be other drivers of balance sheet volatility, apart from the extrapolation of the Solvency II risk-free rate curve.

Consider an insurer that invests solely in government bonds, while valuing its liabilities in accordance with the Solvency II risk-free rate curve. Prior to the financial crisis, this may have been seen as an appropriate hedging strategy, as government bond yields and swap rates tended to move in step with one another, immunising the balance sheet against interest rates changes.

Post-crisis, however, government bond yields have widened relative to swap rates, introducing fresh volatility to balance sheets. Issues such as this have an important bearing on the effectiveness of any hedging scheme.

An insurer should not be indifferent when choosing swaps or government bonds as its preferred tool for duration management. To effectively hedge the balance sheet, it may be necessary to reduce its holding of government bonds in favour of interest rate swaps, or alternatively, to hedge the basis risk between its government bond portfolio and liabilities valued using swaps.

Ross Evans, Angelina Lai, Eamonn Phelan and Derek McLean report on behalf of the 'How to hedge the risk-free rate under Solvency II' working party. The group's other members are Paul Collins, Oliver Firth, David Johnson, Emily Penn and Alex Probyn
This article appeared in our July 2012 issue of The Actuary.
Click here to view this issue
Filed in
07
Topics
Risk & ERM