Q&A: On my agenda - Elliot Varnell

Dan Georgescu talks to Milliman's Elliot Varnell about ESGs, CROs and the impact of Solvency II 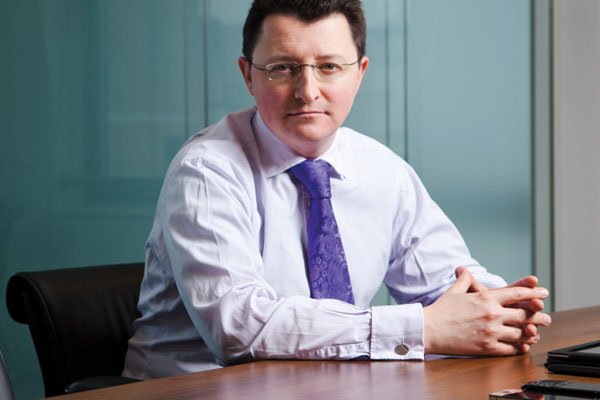 Curriculum Vitae
Elliot Varnell is a senior actuary at Milliman, working in economic capital and asset/liability modelling. He has 15 years of experience researching and developing economic scenario generators (ESG). He was most recently a principal adviser at KPMG and worked previously at Barrie & Hibbert, Deloitte and Bacon & Woodrow. He is a regular author and speaker at industry events and has consulted for many of the Chief Risk Officer (CRO) Forum companies. He works with various professional bodies - including the UK Actuarial Profession's finance and investment research committee, the ERM Research Committee and the Extreme Events Working Party - and is the risk chair of the Risk and Investment Conference 2012 in Leeds. Internationally, he has worked for the Groupe Consultatif on Solvency II and the International Actuarial Association on risk management.

What did you do before working with economic scenario generators (ESGs)?
I was a millimetre solid state physicist at a UK government laboratory, having done a BSc and MSc in Physics and Microwave Solid State Physics. The team I worked for built millimetre wave radiometers for radio telescopes and satellites, measuring the gas composition of stars and earth.

What would you have done if you hadn't become an actuary?
I would have ended up in an economics-related profession. I was never that good at soldering 1mm cube diodes in full cleanroom gear.

Do physicists make the best actuaries?
Yes, but then I am biased. My lecturers warned me to stay away from mathematicians, because they would fry my brain with endless debates about singularities and pathological cases - actually, I think they had a point. However, physicists always tended to have a penchant for ignoring 'higher order terms' - which always seemed rather approximate for people that built H bombs and rockets.

But, seriously, I would argue that psychologists, anthropologists, economists, meteorologists and engineers, among others, all make quite good actuaries too - we need that diversity of background within our profession to become effective risk managers and branch out to areas of industry beyond the traditional areas that actuaries have operated in.

Who inspires you?
Mathematically, people like Johnny Ball, who made maths interesting and fun as a teenager, and, later, Ian Stewart for making mathematics seem intuitive.

Scientifically, I have great admiration for James Lovelock for his ability to see and communicate that a systems approach is needed to understand our planet. I studied physics, so should cite Richard Feynemann for his brilliant way of communicating complex ideas in that field.

In business, it would be Sir John Harvey Jones for showing how to tap into the social network of the firms he was helping to find out the true causes of business failing and for his ability to confront management in a direct but humane way. He was invariably right.

As far as actuaries go, I had the pleasure of working with Tim Sheldon and David Gulland early in my career, who were excellent role models for an actuarial trainee. I still find myself inspired by many actuaries in the profession, too numerous to mention here.

How would you explain what an ESG does to a 12-year-old?
I'd probably say: "It's a computer program that makes up (using well-documented expert judgement) thousands of different ways the economy could pan out over the next few years. Among other things, it helps actuaries (people who have managed to work out how to get paid moderately well for doing maths) understand what bad things might happen to the money they are looking after for pensioners and savers (for example, grandad's pension or your university fund), so they can do their best to make sure the pensioners and savers don't lose too much of their money if the economy doesn't do well."

Were you expecting ESGs to become as important as they are now when you started?
Perhaps. I was lucky to work in a research and development team under Richard Chapman back in 1998, where we first developed the Bacon & Woodrow ESG. The sense in the team was that these were indeed important tools.

However, it was only the FSA and RBS in 2003 that really made them important in the commercial sense to UK LifeCo; prior to that, most interest was from research and development-types in pension funds. Market consistent embedded value (MCEV) was the other major driver, of course, for the large European insurers around 2005, and Solvency II has made them even more commonplace.

I do, however, get concerned when people say that ESG models are 'important', as really they just provide a conduit to value a set of cash-flows based on a set of assumptions that the model builder and calibrator decided on or implicitly assumed. For me, the way that the model builder and calibrator come up with their assumptions and how they justify them are far more important. Even more significant are the assumptions that the designer or calibrator are not even aware they made - because they are 'obviously true' or Rumsfeldian 'unknown unknowns'.

What gets you up in the morning?
The best bit about my job is the variety of people I meet and the opportunity to be paid to think, solve problems and teach. I think that is a luxury that many don't have, so I feel lucky that I do.

How far have the Profession's knowledge and skills developed during your years in economic modelling?
I would say a long way, but not always visibly. There are a lot of really good students and young actuaries out there with some exciting new ideas. I hope that over the coming years we will hear a lot more from these younger members and that the Profession will create an open and non-judgemental environment that encourages them to share the products of their research.

I think there is a tendency to hang on the coat tails of the banking quant community and fall into the trap of believing that the more complex the algebra, the more right the answer must be. We are now starting to see finance academics echo ideas that short-term investing is really different to long-term investing. The revisiting of finance theory in the wake of the crisis should be an opportunity for actuaries to gain the leading edge again.

What are an actuary's best qualities?
It depends on whether they want to be quant actuaries or business actuaries.

In my view, quant actuaries do best understanding the maths and ensuring that knowledge is applied where appropriate in their business. 'Where appropriate' is, however, the key, as making models ever more mathematically complex can easily impede risk management in financial firms. Actuaries have a crucial role in helping the board to use their models to make decisions rather than letting the models make the decisions the board should be making. They should be at the forefront of saying how complex is complex enough.

Business actuaries will need to have developed a wider skills base than the current exams system delivers. They are likely to be actuaries that want to know the answer and what it means for decision-making. A great role for a business actuary would be as chief risk officer (CRO), but they should be happy stepping into a chief finance officer or chief executive role and adapting to it. Evelyn Bourke is an excellent example of an actuary who has held all three of these roles in recent years. In the world of pensions, Sally Bridgeland has become the CEO of a pension fund - so it can and is being done.

And which are you?
I was a quant actuary, but I am becoming or have become (hopefully) a business actuary.

The previous president of the Institute and Faculty of Actuaries summed up his vision that every CRO, for all industries, will be an actuary. What are your thoughts?
I think Ronnie Bowie was right. Business actuaries can make excellent CROs, as long as they are not trying to be quant actuaries at the same time. There are much wider business skills that a CRO needs, beyond the current core actuarial syllabus.

I hope that we can steer education to create actuaries with that skill set, building on the Chartered Enterprise Risk Analyst (CERA) standard. The reality is that the world changes quickly, though, so training actuaries to be able to teach themselves and to have the confidence to step into different areas is probably more important than making the syllabus chase the outside world.

However, if actuaries are to lay claim to CRO roles beyond insurance and pensions, the profession will need to initiate chapters for those industries. An obvious start would be a chapter for actuaries working in banks and as investment managers.

If you could build a new insurance solvency regime from scratch, how close would it be to Solvency II?
I would keep Pillar 2 and the internal model framework, which I think were well designed - Basel could learn a lot from the work that was done on those. However, I think Pillar 1 is struggling with a hard-coded risk measure and hard-coded market consistent valuation, which are having unintended consequences on the function insurance plays in the economies of different member states.

In a parallel universe with no political backdrop, I would start with the finance ministries of Europe and get them to articulate what role they want an insurance sector to fulfil in the European financial system.

The insurance sector plays a different role in different EU countries, having grown symbiotically with the tax, benefit, health and pension systems in each. Therefore, unless the European Council and Parliament can agree the role of insurance in the wider European financial system, the European Commission and The European Insurance and Occupational Pensions Authority (EIOPA) will constantly be trying to amend their regulations to minimise disturbance to the financial system in each member state.

What do you do to relax?
I am pretty relaxed most of the time, as I really enjoy my work. I spend time with my family at weekends and holidays, walking the South West Coast Path or skiing. Occasionally, I get to Stamford Bridge to watch Chelsea too, although that probably doesn't count as relaxation this season!
This article appeared in our April 2012 issue of The Actuary.
Click here to view this issue
Filed in
04
Also filed in
Interviews
Topics
Careers