Is the insurance industry ready for the challenges and opportunities presented by climate change, asks Hannes Van Rensburg 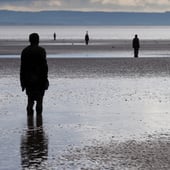 The last 24 months have seen an unprecedented level of natural disasters, which included the earthquakes in Chile, New Zealand and Japan, the Queensland floods and one of the costliest US tornado seasons to date. These events have hit insurers' earnings and reinsurance programmes very hard, and could have been much worse had ?Hurricane Irene not fizzled out before hitting the densely populated US east coast.

Some questions that spring to mind are whether this experience points to an increase in the frequency of natural disasters? If this is a true increase rather than only an increase in media coverage, is this a new level of normality or only a short-term oscillation?

Swiss Re's January 2011 Sigma study shows that there has been an increase in natural and man-made events, both increasing from around 50 events per annum in the 1970s to 150 events per annum today. Economic losses from these events in 2010 have been estimated at $218bn with a cost to insurers of $43bn. The ratio of insured to economic losses, at around 20%, is extremely low when compared to other years  for example, in 2009, economic losses were $68bn and insurance losses were $27bn, a ratio of around 40%. This is largely due to many of the 2010 events impacting areas with low levels of insurance penetration, such as the floods and earthquakes in Asia and the Haiti earthquake.

A major environmental disaster has ?been the Deepwater Horizon oil spill, ?where it will take years for the full economic and environmental impact to be known. ?The impact of similar man-made disasters is expected to increase due to the projected growth in the global population and in global demand for natural resources. Companies are also engaging in more risky explorations to meet this demand, sometimes without adequate risk mitigation. Of course, these events will have an insurance implication but, more importantly, they might have a long-term catastrophic impact on the environment. While insurance for such eventualities can help companies manage their risks, it is important that insurance does not dilute the corporate responsibility and conscience by mitigating poor risk management.

Likewise, natural catastrophes such as windstorms, droughts and floods are expected to increase due to global warming, brought about by increasing levels of carbon dioxide in our atmosphere. ?The paper produced by the Climate Change GIRO Working Party (2007), 'The impact of climate change on non-life insurance', provides a comprehensive guide to the underlying research surrounding climate change and its expected future impact on general insurance companies.

Catastrophe models have now been part of the insurance industry for more than a decade, integrated in both the capital and underwriting functions. Companies rely on the science and consistency that these models can bring to the table. Therefore, the latest update to the RMS US windstorm model came as quite a shock to the market, where modelled expected losses increased significantly across the market with some accounts seeing modelled expected losses increasing by more than 200%.

In the latest model release, the modelled expected value is driven by modelled hurricane frequencies that are higher than any period in the historical data set. This is based on the premise that the increase in sea surface temperature (SST) will increase hurricane activity and intensity on a ?long-term basis. Over and above this, it is also expected that the next five years will be even more active, with the North Atlantic oscillation in SSTs (above the increasing long-term trend) adding a further 30-40% to modelled expected losses. It is fair to say that the magnitude of the model change has taken the market by surprise and adoption of this new model view has been fractured.

Whether market players believe the modelled results or not, reinsurance rates across the market are expected to increase on the back of this model change. Direct insurers will have used the increase in modelled cost in their negotiations pushing for higher premiums. Regulators and rating agencies will be asking questions if a company changes model or methodology purely due to an increase in modelled cost. With global warming on people's minds, it does not matter if this is a true or perceived increase in risk.

The increased risk and awareness of risk offer a unique opportunity to the insurance market. The world looks to the insurance industry for the transfer of risk, and none more so than the risks from perils impacting our primary needs for food, water and shelter. Climate change is expected to bring severe weather conditions and more frequent droughts causing crop failure and loss of livestock. In the developing world, where the majority of the population makes their livelihood from agriculture, crop failure could cause unemployment, migration and political unrest and bring with it immense uncertainty.

New products can offer stability to ?society while increasing insurance penetration throughout the developing world. For example, agriculture insurance is a market that has seen tremendous growth in recent years. The Agriculture Insurance Company of India  a pool operated under the operational supervision of the Indian government  supplies weather-based crop insurance to about 20 million farmers in ?500 districts in India. Reinsurance for the pool is then placed in the international markets, including London.

Many other products have also come to market in the areas of renewable energy, weather derivatives and new political risk products, such as carbon credit eligibility (to trade), to name but a few. 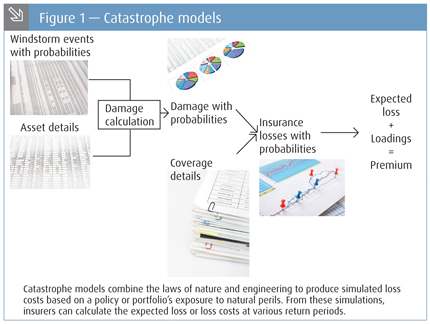 The insurance industry will have an important part to play given the uncertainty surrounding the impacts of climate change and global demand on the environment. With larger populations and larger cities in catastrophe-prone areas, insurance will become even more crucial to companies and governments in managing the economic impact of such events.

Insurers will continue to look to catastrophe models to provide insight into their catastrophe pricing and monitoring of aggregate exposures in the light of these population trends. This leaves the industry at a bit of a crossroads where the view of risk of current models has been questionable. The reliability of models for areas previously classified as 'non-modelled' will also need to improve, as most of the large catastrophes impacting the 2010 and 2011 results came from these perceived 'lower risk' areas.

The Climate Change Working Party paper also highlighted areas where companies and governments are already actively involved in mitigating the impact of climate change, and sets out ways that we as actuaries can contribute both personally and commercially.

This article appeared in our November 2011 issue of The Actuary.
Click here to view this issue
Filed in:
11
Topics:
General Insurance