Post 2039: how to usher in a new era of flood resilience

Kemi Bello considers how government, insurers and homeowners can usher in a new era of flood resilience before the Flood Re initiative ends in 2039 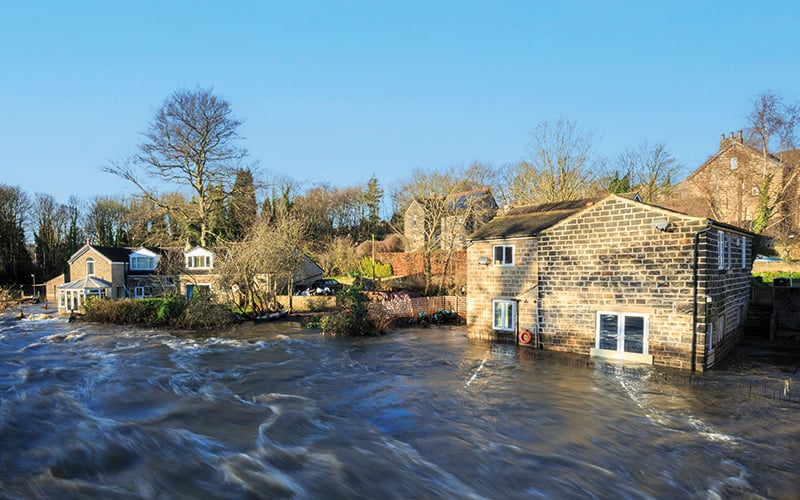 Flood Re, a joint initiative between the UK insurance market and the British government, was launched in 2016 to increase the affordability of household flood cover through an annual £180m levy placed on insurers, with an element of cross-subsidisation based on council tax bands. Since its formation, Flood Re has benefited more than 350,000 UK households. Despite its achievements, it was only ever intended to be temporary, and is due to conclude in 2039. What are the likely challenges for the UK flood market after that date? And what flood mitigation measures can be taken?

Flood Re’s cessation would end the flood-related cross-subsidisation of premiums (based on council tax bands). The resultant rebalancing of premiums may adversely affect those who are less financially able to protect themselves – and insurance is crucial for financially vulnerable individuals.

A likely by-product of this rebalancing is theoretically correct premium increases in some cases, with a move to more risk-reflective pricing. Charging risk-reflective flood cover may not be commercially feasible for some insurers – particularly smaller ones, which may exit the market. This would cut competition and thus reduce the incentive and pressure for the remaining insurers to keep rates competitive. Any reduced take-up of insurance in high flood risk areas is likely to increase the need for government intervention following flood events.

After 2039, it is possible that the issues which led to Flood Re’s creation in the first place will return. However, a number of measures can be taken to prevent this, both in the run-up to Flood Re’s termination and after it.

Government – Properties should be designed and built with flood resilience in mind, particularly as those built on or after 1 January 2009 are not eligible to be ceded to Flood Re. The government could introduce legislation to achieve this, for instance mandating property developers to have due regard for flood risk protection. Furthermore, the government and local authorities should continue to invest in flood mitigation measures such as flood defences.

Homeowners – There will need to be more active engagement on behalf of homeowners to understand their properties’ flood risk, as well as uptake of mechanisms to reduce the risk. The existence of the Flood Re scheme arguably cuts the incentive for homeowners to do this.

Insurers – Insurers will need to adjust their approach to tackling flood risk beyond simply reinstating properties to their current risk levels, which indemnification aims to achieve. For a given insured portfolio, it would be advisable for insurers to reduce the associated risk level, rather than maintaining it. However, in the absence of Flood Re, there may be constraints on the commercial viability of this in a competitive market.

Flood Re’s recent Build Back Better launch is an example of going above and beyond the reinstatement of the same risk level. Since April, participating insurers have been able to offer policyholders the opportunity to have Property Flood Resilience (PFR) measures up to the value of £10,000 installed. These include raising plug sockets and using more flood-resistant materials, such as waterproof plaster. So far, several insurers have subscribed, including Ageas, Aviva and NFU Mutual. The initiative could be extended to implement measures that improve flood resistance – minimising the amount of water entering properties in the first place, as opposed to only limiting the extent of the damage once the water enters.

One drawback of initiatives such as Build Back Better is that the focus is on properties which have previously flooded. Due to the return periods associated with flood events, and the changing severity of such events, it is possible that a property that has never flooded before will do so in future, reducing the reliability of past claims experience.

Flood Re is currently co-ordinating a project that tackles these issues with the Environment Agency and Middlesex University Flood Hazard Research Centre. One of the project’s aims is to develop a prototype PFR scoring system, which will be piloted with 30 properties. The scoring system would involve the issuance of performance certificates indicating the current risk levels of various types of flood, as well as key recommendations for improvement.

In future, PFR ratings could form part of a property’s sales package, like Energy Performance Certificate ratings. Indeed, they could be further extended to form a more holistic ‘climatic’ package covering fire risk assessments and wider perils such as subsidence. Insurers could use PFR scoring systems to incentivise policyholders to be proactive in reducing their risk level – through discounts, for example.

Flood risk is non-static and the impact of climate change on extreme weather events exacerbates this uncertainty. Furthermore, flood intervention measures such as Build Back Better would change the flood risk associated with some properties over time. Changing flood patterns may also lead to more frequent updates of flood zones and maps and more iterations of vendor catastrophe models, as the historic data used within stochastic event sets may become less relevant.

Tackling the challenges that are likely to be faced after 2039, once Flood Re exits the market, will require ongoing monitoring and a collective response from homeowners, financial institutions and the government, among other stakeholders. Indeed, it will require more focus and effort to reduce flood risk significantly and/or devise an even more innovative solution than Flood Re.

Kemi Bello is a member of the IFoA Flood Working Party, and has contributed to an external, independent reserve review for Flood Re as a consulting actuary