Game on: the outcomes of a motor insurance competition in Saudi Arabia

Juan Ignacio de Oyarbide discusses the outcomes of a motor insurance pricing game held in Saudi Arabia, and key lessons to emerge from it 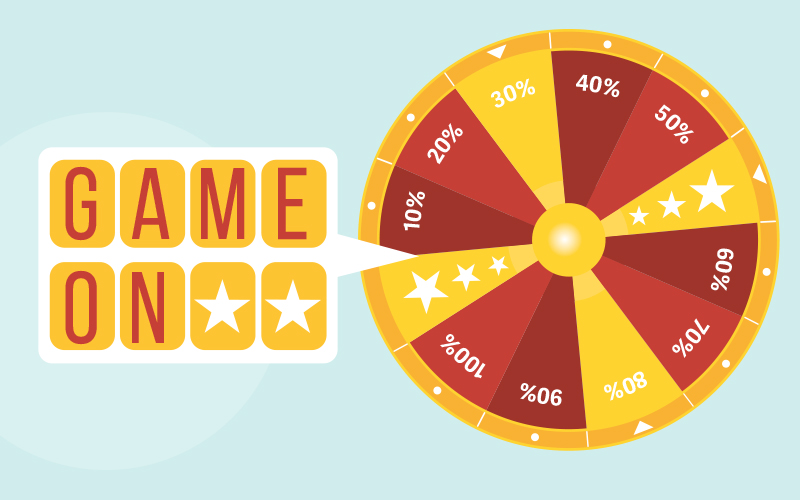 The addactis® motor insurance Pricing Game is a competition in which actuarial professionals work together to solve a problem that reflects actual market conditions. The objective is to provide loss estimates and commercial premiums for a group of policyholders.

The last edition, organised by addactis and Badri Management Consultancy in Saudi Arabia, involved 40 actuarial professionals representing 21 insurers and the insurance regulator Saudi Central Bank. The workshop created a new dynamic in which they could discuss pricing challenges in the local market, and the implementation of actuarial techniques to address such challenges.

The game in context

In the Saudi Arabian motor insurance market, insurers have underwritten business with 30%–40% discounts since the pandemic outbreak. This practice, funded by a frequency drop caused by lower car usage, coincided with the disruption of online aggregators. Despite the low-price environment and increased competition, the market loss ratio declined from 73.1% to 66.6% in 2020.

Nevertheless, this favourable situation was only temporary. While most insurers were extending the aggressive pricing practices developed since Q2 2020, claim frequencies reverted to pre-pandemic levels by the end of 2020. This combination led to a drastic market loss ratio of 82.5% and a 78% decline in underwriting profits in 2021.

Following this context, the 2022 edition of the Pricing Game recreated a third-party liability block of business written in 2020, which was onerous during 2021 and Q1 2022. The objective was to correct the price inadequacy in the upcoming renewal period, considering both profitability and customer retention. The competition was divided into two main parts spread over two days: first, the computation of a technical price using generalised linear models (GLMs); second, a commercial price definition implementing a simulation-based methodology.

Nine teams participated in the competition, and their final performances were evaluated on profitability, retention and risk model accuracy (RMSE), in that order of importance. Each team had to fulfil a minimum customer retention ratio of 80% to qualify for the ranking.

The implemented rating strategies diverged from team to team. Some decided to solely target profitability score, squeezing the minimum retention assumption. Others went for a more balanced approach, keeping higher retention at the expense of profitability. Figure 1 shows the results for seven teams remaining after one was removed for getting negative profits and another did not qualify for the ranking. 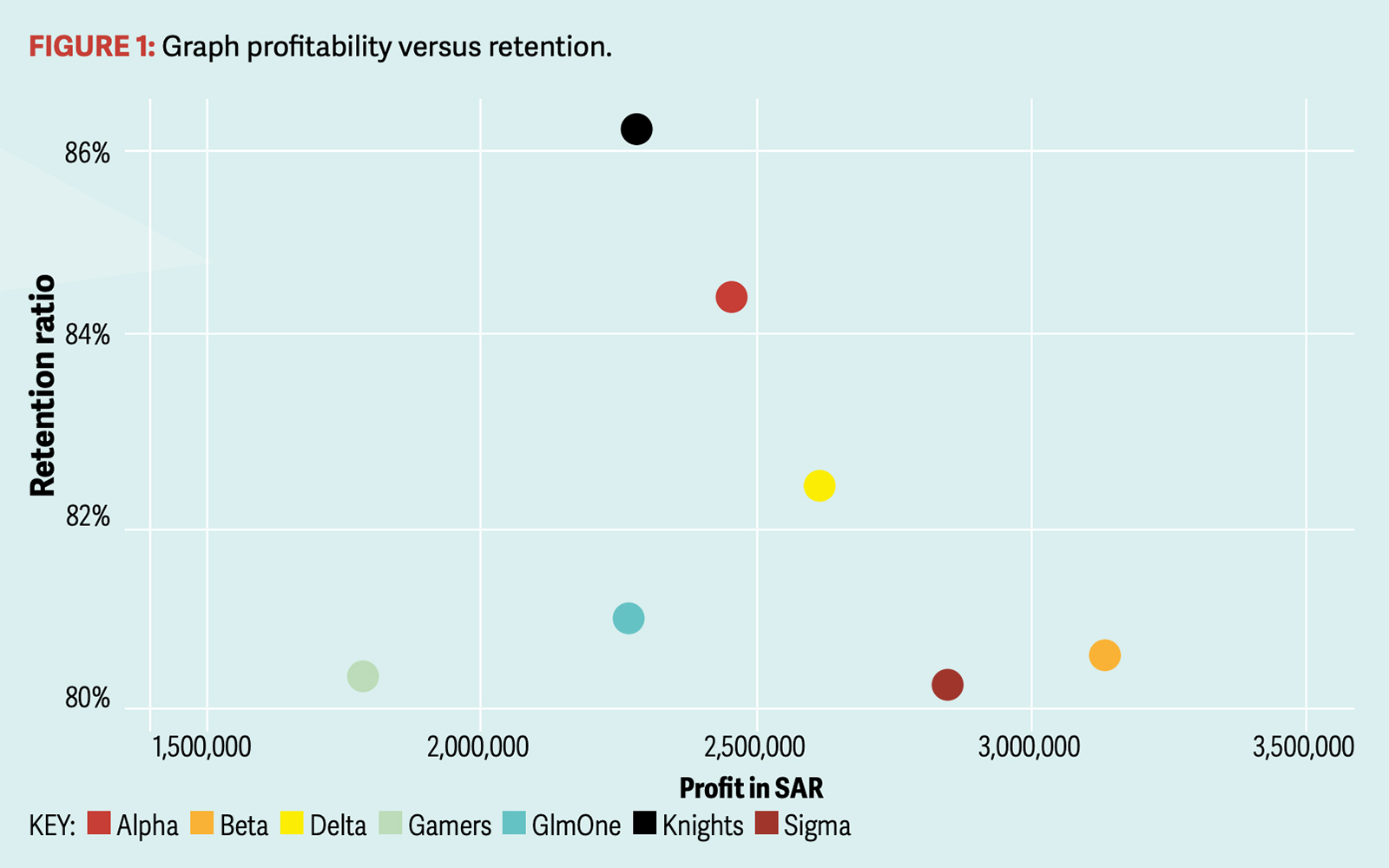 The final score was tight between two teams placed in different quadrants of the profitability versus retention map. The winning team, Beta, achieved a retention ratio of 80.5% and profits of SAR3.15m, outperforming other teams that targeted similar retention levels. Beta paid most attention to the commercial means to maximise profitability, exploring numerous strategies by analysing most rating factors, which gave it the edge. Its final decision was based on a tailored geographical segmentation and small price refinements based on vehicle body types.

The second team, Knights, secured a retention level of 86% and profits of SAR2.3m. Its approach was particularly interesting because it targeted every performance ranking. It spent more time defining the excess loss layer in the claim cost distribution, trying different cut-off points and maximising the GLM’s performance in the first distribution layer. Its commercial strategy was based on high increments to a specific sub-population of vehicle makes in the central geographical region. It found a more effective efficient frontier than other teams, which, combined with the high retention, led it to second place in the competition.

Other alternative approaches are worth mentioning. Delta built a baseline scenario resulting from offering risk-adjusted prices to every customer, regardless of what prices were in the past. It measured the impact in terms of churn of implementing this rating strategy and then derived feasible scenarios from there. Although it could not succeed in the Pricing Game, its approach would be worth exploring in a real-life scenario.

Alpha and GlmOne got the best performance in terms of model accuracy, by meticulously working on factor-level grouping and applying precise forecast assumptions. Surprisingly, these teams achieved the lowest RMSE, but this did not materialise in terms of profitability.

Designing the pricing game involved creating several data generating processes that, together, could mimic real information (Figure 2). Holding the data generator allows us to derive the implicit risk that each participant assumed with the chosen rating strategy. By simulating the out-of-sample dataset several times, one can re-evaluate each team’s performance and quantify the profit variation resulting from its pricing decisions. 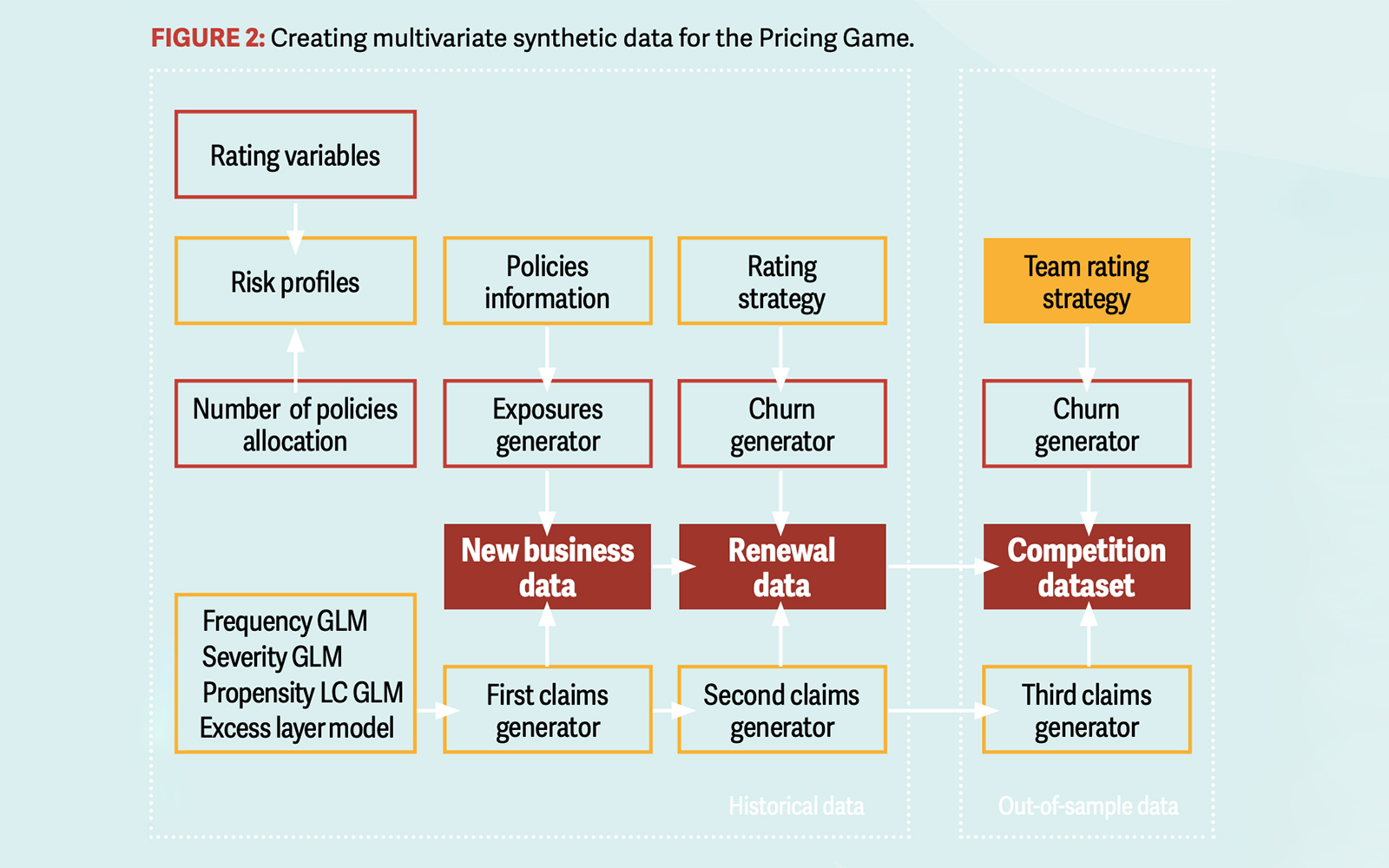 After running multiple simulations for the 2022 Pricing Game, one can see that Beta obtained not only the highest expected profits but also the lowest coefficient of variation. These results confirm the effectiveness of its rating strategy to retain good risks and win the profitability ranking.

The Pricing Game revealed how actuarial teams might take different rating decisions under the same market circumstances. Every team in the competition approached the problem in a different way, creating different pricing segmentations and targeting different levels of profitability and retention. Their proposed analyses have contributed to understanding various aspects of the current pricing inadequacy in the Saudi motor insurance market.

One relevant lesson from the competition is that multivariate models are fundamental to computing more precise risk-adjusted premiums, but they are not sufficient to succeed in a competitive market. Pricing practitioners should guide decision-makers to achieve the insurer’s specific profitability and sales targets.