Storm watch: Can IPCC models be used in cat modelling?

Can IPCC projections be used to adjust catastrophe models for climate change? Nigel Winspear and David Maneval investigate, using US hurricanes as an example 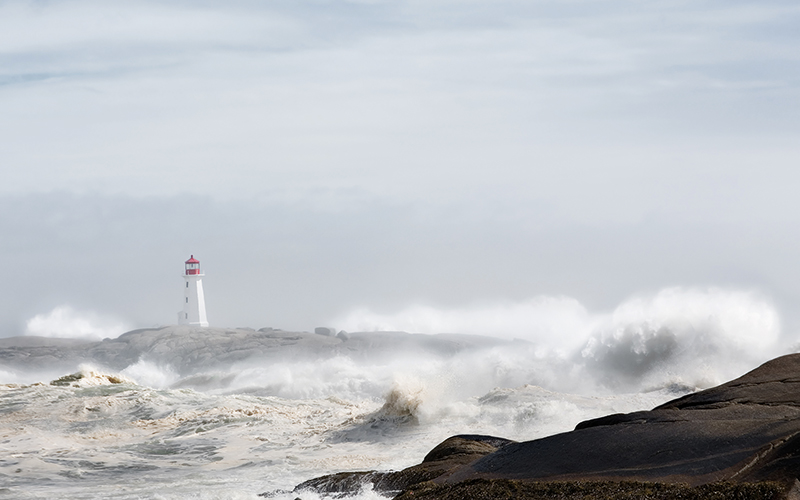 The Intergovernmental Panel on Climate Change (IPCC) predicts that while tropical cyclones (TCs) may becomeless frequent in the future, they are likely to be more severe, with 1.5°C–4°C of global warming causing a 10%–20% increase in the proportion of very intense TCs (those falling into Saffir–Simpson categories 4–5). While IPCC projections are expected to be relevant at global and continental scales, there is thought to be a disconnect between projection and reality when applied at a smaller scale. This is important for insurers and reinsurers that operate at national and regional levels, or that have major peak exposures falling below the IPCC projections’ intended geographic resolution.

To show whether there is a disconnect between IPCC global projections and their regional relevance, we analysed North Atlantic hurricanes – a major source of risk for the insurance market. The IPCC has already projected an increase in the proportion of Category 4–5 TCs at a global scale. Similarly, a 2013 paper, ‘Recent intense hurricane response to global climate change’, detected a 25%–30% increase in the proportion of Category 4–5 TCs in the North Atlantic per 1°C of observed global warming between 1975 and 2010.

We wanted to know if we could detect the same trend in the North Atlantic basin during the past few decades and in the proportion of these storms that make US landfall, bearing in mind that this is highly relevant to the insurance industry. Of the three hurricanes active in the North Atlantic in September 2017, for example, only one (Hurricane Irma) made US landfall.

We based our test on HURDAT, the definitive catalogue of hurricane activity in the North Atlantic, which is maintained by the US National Hurricane Center. We simply calculated the annual count of TCs in the North Atlantic by Saffir-Simpson intensity category (1–5) and then repeated this to find those that made US landfall (as defined by the US National Hurricane Center). From this, it was straightforward to calculate the percentage of Category 4 and 5 TCs in the North Atlantic and the percentage that made US landfall. To calculate long-term averages for the North Atlantic data, we used a start date of 1970 to coincide with the onset of satellite-based weather monitoring, after which HURDAT is complete for the entire North Atlantic basin. For US landfalls, we started the calculation in 1900, 1950 and 1970 respectively. We know the record of US landfalling hurricanes is effectively complete from 1900, but TC intensities are thought to be uncertain for the strongest landfalls until the early 1950s at the earliest.

The lack of correlation between these trends is presumably due to the impact of other environmental factors, such as the Atlantic meridional mode and El Niño/La Niña conditions in the tropical Pacific, on the shape and location of TC tracks. Such factors are known to be associated with variation in the location of cyclogenesis and in the strength and position of the Bermuda high pressure system, both of which influence TC tracks and thus the likelihood of US landfall. 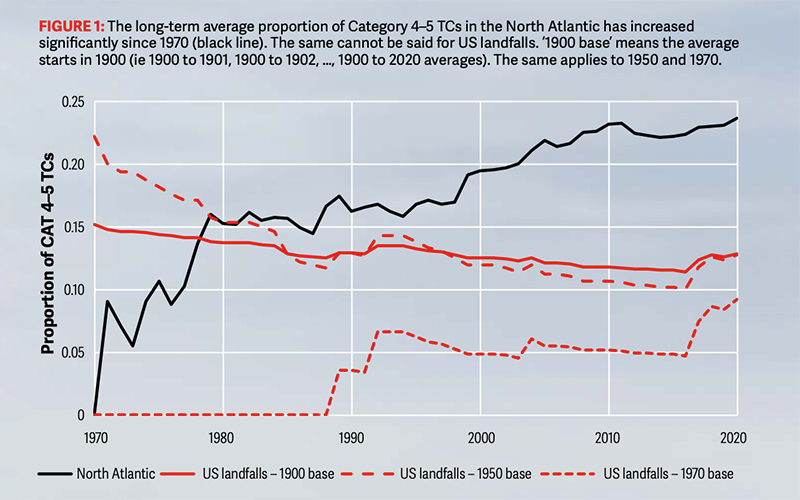 The disconnect between global projections and regional relevance implies that we cannot blindly adopt IPCC 2021 projections to adjust the frequency or severity of atmospheric perils in catastrophe models. As a solution, we propose focusing on projections from high-resolution regional climate models (RCMs) that can provide insight into more localised extreme weather events (such as the US landfalling rates of TCs) under future climate scenarios. The chosen RCM should be able to reproduce the historic Category 4–5 trend in US landfalls since 1970. In this case, RCM projections may be reliable enough to adjust catastrophe models for the long-term effect of climate change.

Several financial services regulators with foresight have been developing climate-related stress test scenarios that span a 30-year time horizon. This matches the reporting period typically used by major meteorological agencies to establish the average climate at regional level. For example, this timescale is currently used for the Bank of England’s Climate Biennial Exploratory Scenario, and by the Monetary Authority of Singapore for its own climate stress test scenario, applicable to insurers and banks operating in the country.

Climate risk will translate directly into increased financial risk for insurers where there is associated change in the frequency or severity of natural disasters, and due to increased morbidity, environmental or professional indemnity exposures, risk to insurer investment assets, and reputational risk. Overall, it is expected that the changing climate will increase loss ratios, which will affect premium adequacy and increase premium liabilities and unearned premium reserves over multiple decades. As climate change is a long-term feature, reinsurance rates will also increase, and the cost will ultimately be passed on to insurers and their policyholders.

David Maneval is head of analytics for Asia at Lockton, Singapore

This article appeared in our June 2022 issue of The Actuary.
Click here to view this issue
Filed in:
General Features
Topics:
Risk & ERM
Environment
Modelling/software