Randall Wright reviews the biography of one of the most important actuaries in the history of the profession -  William Morgan: Eighteenth-Century Actuary, Mathematician and Radical by Nicola Bruton Bennetts 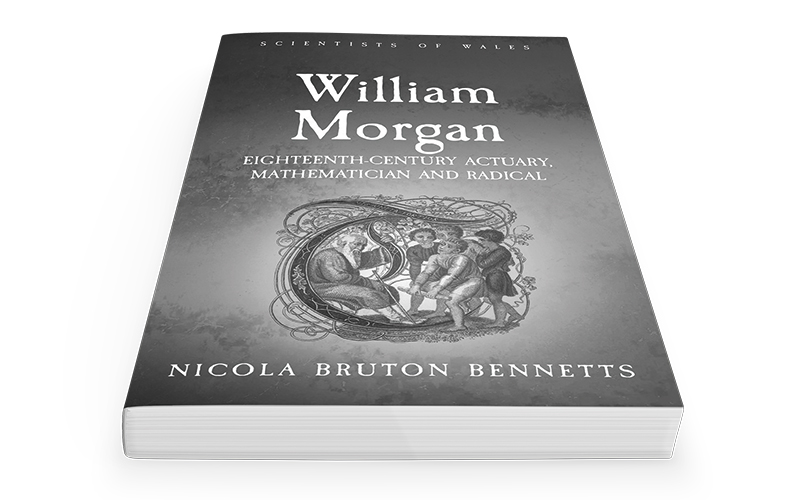 I didn’t know when I moved to Bridgend, Wales that I was walking in the footsteps of actuarial greatness. I soon learnt to share the town’s pride in its son William Morgan (1750-1833), widely known as the ‘father of actuarial science’. This biography justifies that appellation and much, much more.

Author Nicola Bruton Bennetts is a journalist who also happens to be William Morgan’s great-great-great-granddaughter, and she combines careful research of archival sources with unique family records and memorabilia. No one else could deliver such a thorough yet personal view of Morgan. The book weaves Morgan’s personal history into the story of how he influenced revolutions in business, science and politics.

Morgan’s early career did not go well. One medical apprenticeship ended in fisticuffs, and his attempt to take over his deceased father’s Bridgend medical practice quickly fizzled out. Luckily, Morgan’s uncle was mathematician, theologian and political dissenter Richard Price (1723–1791), who finished the posthumous publications of Thomas Bayes (1701–1761) – now known as Bayesian statistics. He also compiled the Northampton mortality table that provided a basis for more accurate mortality calculations, and was advising the fledgling Equitable Life Assurance Society. Price landed Morgan a job as an actuarial trainee with the Equitable, asking his nephew if he knew mathematics; Morgan replied: “No, uncle, but I can learn”. Less than a year later the Equitable’s lead actuary died, and 24-year-old Morgan was pressed into service.

Armed with his uncle’s mathematics and advice, Morgan set about establishing a complete set of calculations and business rules that made the Equitable successful over his 56-year career and became the industry standard that we still use today. At his uncle’s suggestion, he started by carrying out the first careful experience study, spending four months painstakingly calculating expected liabilities for fewer than 1,000 policies (he would have appreciated Excel!).

Within four years he had published a pioneering book on the calculation of life assurance and annuities, and more followed. He showed how complicated liabilities, including multiple lives, could be calculated from any underlying mortality table, and implemented ideas such as varying mortality assumptions by age and quantifying the effect of select mortality due to underwriting. Not only did he formalise the practice of calculating and holding reserves to pay future claims, but through many contentious years he also established sound business practices to hold off participants clambering for early surplus distributions.

The full extent of Morgan’s actuarial innovation and business acumen is displayed throughout this biography with specific details and motivations. Morgan’s influence spread beyond the Equitable; he was in demand as a consultant to most of the major insurance companies that followed it.

Beyond actuarial science, a major theme is how prominent Morgan and his family were among those who dissented against the government during the American and French revolutions and William Pitt’s ‘reign of terror’. Bruton Bennetts has the original subpoena issued to Morgan to appear at the trial of several defendants for high treason, and uses the era’s political cartoons to great effect. In true actuarial style, Morgan’s contribution was a series of detailed and blistering financial reports on government wartime spending. Given Morgan’s actuarial sense of risk and reward, it is amazing that he went so far, and surprising that he did not join his friends in the Tower of London.

Bruton Bennetts also mixes in fascinating sidebars, such as Morgan’s experiment to show that electricity cannot travel through a vacuum, which resulted in a crude version of what is now known to be an X-ray tube.

Rounding out this story of a life well-lived is a collection of family stories and documents, revealing Morgan as a loyal and devoted family man who had his share of imperfect human moments. We see endearing family letters and portraits that add specificity to our sense of William Morgan as a man of his day who just so happened to revolutionise our world.

Reviewer: Randall Wright, product actuary with Monument Re in the UK and an honorary associate professor with Swansea University

This article appeared in our June 2022 issue of The Actuary.
Click here to view this issue
Filed in:
General Features
Topics:
Soft skills