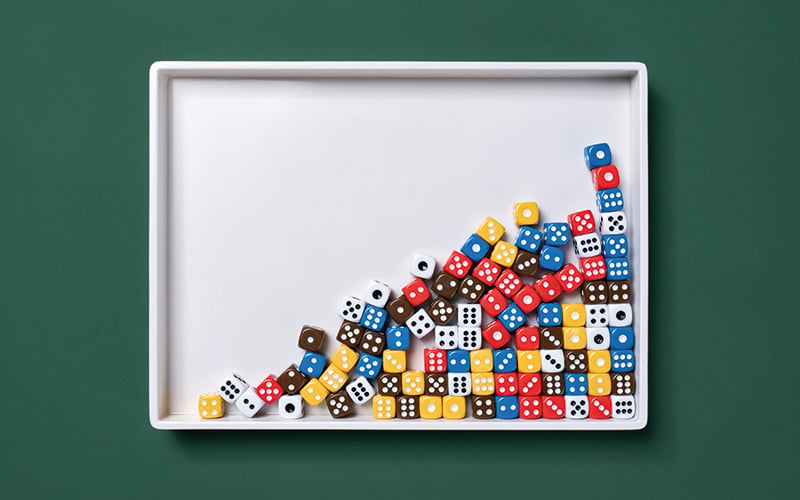 Cancer remains one of the major causes of mortality in England, claiming 27%–28% of all deaths each year – with the exception of 2020, when the pandemic became the UK’s biggest cause of mortality, and cancer accounted for 24% of deaths according to the ONS.

Socio-economic inequalities in type-specific cancer risk are worsening in several countries, including the UK. The problem has been exacerbated due to the pandemic, which disproportionately affected certain groups, including the elderly, people with comorbidities and those who are more deprived. Furthermore, the UK’s national lockdowns not only halted certain health practices such as cancer screening and surgery, but also affected health-seeking behaviour. According to Cancer Research UK’s report Evidence of the impact of COVID-19 across the cancer pathway: Key Stats, the number of people being diagnosed with cancer or starting cancer treatment has fallen sharply.

Here we share our analysis of the socio-economic inequalities in the rates of major cancer types, as well as the impact of delayed diagnosis on mortality. The analysis is based on a hierarchical Bayesian Poisson-lognormal

model, which captures the potential impacts of age, calendar year, deprivation, gender and region on cancer rates. Our approach, which can be found in our paper ‘Socioeconomic disparities in cancer incidence and mortality in England and the impact of age-at-diagnosis on cancer mortality’, combines cancer morbidity and mortality data in the nine regions of England between 2001–17, provided by the Office for National Statistics.

We found significant differences among deprivation deciles in the incidence of lifestyle cancer types, such as trachea, bronchus and lung cancer, across the regions, with higher incidence in more deprived deciles. There are similar differences when all cancer types are combined.

All-cancer mortality has declined since 2001, with the lowest rates and steeper improvements being in more affluent groups for both men and women. However, mortality has improved less for women, and they also have wider deprivation gaps in the most recent data.

it has mostly deteriorated for women, with a widening deprivation gap in each region and bigger disparities in more deprived levels. Figure 1 depicts the differences in age-standardised mortality rates between the most and least deprived deciles in each region in 2017. It shows, for instance, that a woman in the most deprived decile in the North-East is more than three times more likely to die of lung cancer when compared to a woman in the same region’s most affluent decile. 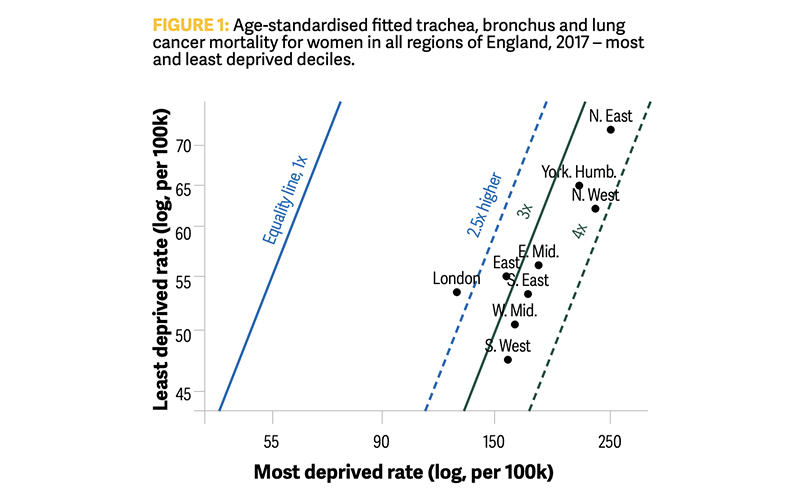 London shows less deprivation inequality than other regions. This might be related to several factors, including, but not limited to, the healthy migrant effect and differential selective migration within England, higher health investment, ethnic diversity, and a distinct income deprivation distribution – the most deprived people in London are higher up in the income distribution than the most deprived people in some other regions.

The picture is different for bowel, breast and prostate cancers; all three have seen mortality decline across deprivation deciles, genders and regions since 2001.

While people in more deprived deciles still experience higher mortality from bowel cancer compared to the least deprived deciles, deprivation inequality is much narrower than it is for all-cancer and lung cancer.

For breast and prostate cancers, deprivation is not found to be a significant risk factor for mortality changes since 2001. Regional inequality for breast cancer is also lower than for other cancer types. This can perhaps be attributed to higher screening awareness and participation at national level for these types of cancers, as well as the absence of a strong link between breast cancer and lifestyle choices. Figure 2 shows the regional differences for breast cancer and female lung cancer. Male lung cancer also has a more prominent impact in northern England, among other distinct regional differences.

Investigations into the impact of delayed cancer diagnosis on mortality are also timely, given the healthcare provision delays during the pandemic. Our analysis reveals that there are regional variations in the impact of average age at diagnosis (AAD).

Figure 3 displays regional deviations (from the national average, shown as value 1.0 on the horizontal axis) of the impact of a one-year increase in AAD on all-cancer mortality for men. The variation between the Midlands at the one end and the North-East and North-West can be seen clearly. 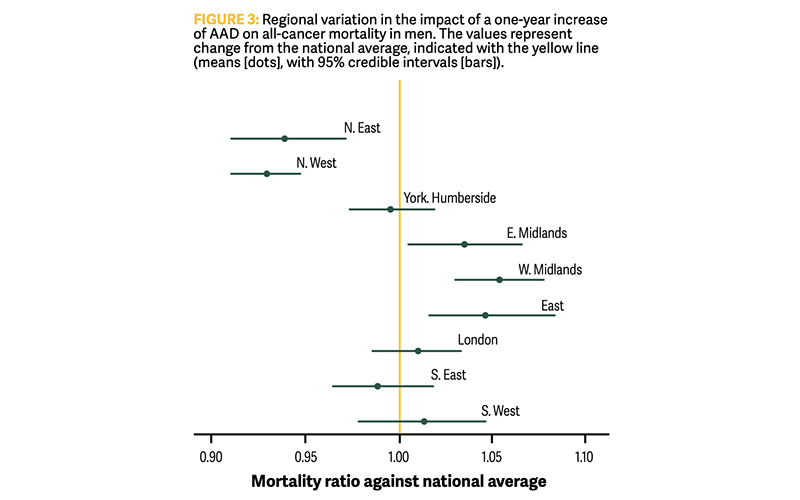 Note that this shows all-cancer mortality, which includes cancer types for which screening is  available, such as prostate cancer (which accounts for around 13% of cancer deaths in men). In general, screening has higher uptake in southern England. For these cancers, a delay in diagnosis can significantly increase mortality (for example because early-stage cancer is missed). However, what is presented here is the combined effect of various type-specific cancer AADs, and the effect from screening is not necessarily the whole explanation. 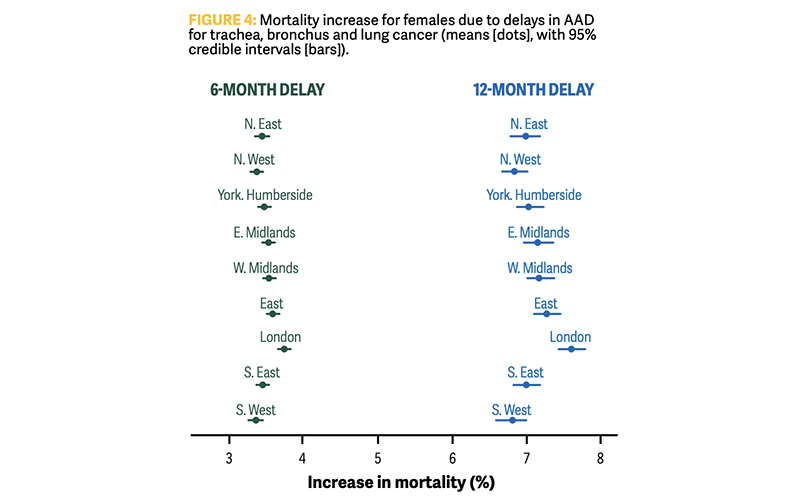 Figure 4 shows the impact of six-month and one-year delays in lung cancer diagnosis on mortality for women – delays comparable to those seen during the pandemic. Our analysis suggests that a six-month delay would cause an increase of around 3.5% in death rates, while a one-year delay would cause an increase of around 7%, with the highest increase being in London. Again, this may be linked to demographic characteristics in London, which is distinctive due to its high ethnic and lifestyle diversity, and factors relating to the healthy migrant effect.

What it all means

Knowledge of these socio-economic disparities can help insurers to understand how insured portfolios differ from the general population, and also add value to setting pricing and valuation assumptions. However, while information about  an individual’s socio-economic level may be useful in the underwriting process, it needs to be balanced against ethical considerations and the risk of driving people in low socio-economic groups out of the market.

Findings around the impact of AAD delays on cancer mortality can also help insurers to understand COVID-19’s knock-on impacts on mortality, longevity and morbidity lines, and the correlations between them. The modelling framework we have developed may be useful for assessing different cancer diagnosis scenarios. For example, it could be extended to modelling early cancer diagnosis in the context of rapid breakthroughs in cancer detection technologies.

More and more life and health insurers and reinsurers are now working with health service providers to deliver timely and quality health checks and medical consultations. Ultimately, the socio-economic and regional differences uncovered by our analysis do not have to be bad news. They suggest that, if well-targeted, public health interventions and insurer and healthcare resources could significantly reduce cancer incidence and deaths.

Adam Shao is an actuary at SCOR, Singapore

George Streftaris is a professor of statistics at Heriot-Watt University

This article appeared in our June 2022 issue of The Actuary.
Click here to view this issue
Filed in:
General Features
Topics:
Health care
Life insurance
Modelling/software