Emerging data science tools and techniques are redefining what it is to be an actuary. Organisations worldwide are looking to optimise their operations , and recruitment agencies are inundated with requests for talent that stands out from the crowd. 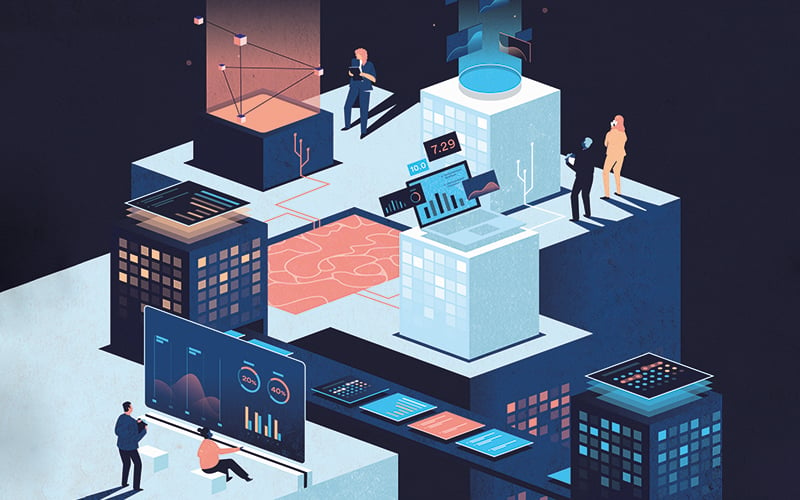 “I don’t think I’ve seen a busier actuarial recruitment market in my career,” says Patrick Flanagan, founder of Clarence George, a bespoke recruiter for insurance and investment firms. “There is a massive demand for top talent, and it’s across everything: insurance, reinsurance, consultancy and investment.”

Here, Flanagan, Ruolin Wang, editor of The Actuary, and four other leading actuaries: Ed Bujok-Stone, associate partner at EY, Anton Scharnick, a chartered enterprise risk actuary and a Fellow of the Actuarial Society of South Africa, Colin Thores, an education actuary at the IFoA, and Valerie du Preez, senior consulting actuary and founder of Actuartech, discuss how data proliferation and new modelling tools are shaping the future of the profession, and the skills that will be needed if actuaries are to thrive in the coming decades.

Employers, Flanagan explains, are increasingly demanding more advanced programming and modelling skills than Excel and VBA, which would have sufficed in the past. “Python is the number one programming skill being requested, followed by MATLAB and R,” he says. “The demand is far higher than the supply.”

This shift has not been without pushback from some actuaries, says Anton Scharnick, a chartered enterprise risk actuary and Fellow of the Actuarial Society of South Africa. “When we first started building models in MATLAB and Python, I was optimistic that they would be adopted by everyone. However, I found that a lot of actuaries still prefer to use Excel because that’s what they’re familiar with. There are pockets of actuaries who don’t want to touch advanced solutions, and more innovative actuaries who do.”

Smaller firms have often been quicker to adapt than larger corporates, although there are exceptions. It is agreed that start-ups tend to have an advantage here because they are building their systems from scratch, while larger financial service providers may need to replace legacy systems. “Traditional actuarial tooling still needs a lot of customisation and repurposing, whereas when you have a Python-built data scraper or data ingester, it really is a ground-up build,” explains Ed Bujok-Stone, associate partner at EY. “We need strong actuaries who can do traditional actuarial work to a T, including in Excel, but who also like to think about innovative tools.”

For Flanagan, the key driver for this demand for talent can be summarised in one word: automation. “It’s about doing things quicker,” he says. “Some of our clients talk about bringing over 100 spreadsheets across the business together. They feel like Python, MATLAB and R can do that for them.”

Scharnick believes that the backdrop for this is the growing amount of data. “Excel is great for prototyping, but struggles when the amount and complexity of the data being analysed increases. For that, programming languages are better suited. Their capabilities allow them to process large amounts of data efficiently and run computations in parallel, speeding up model runs. The ability to run a model in minutes instead of days, and to visualise the results in a way that effectively communicates the key insights, allows for quicker decision-making and better financial outcomes.”

In 2017, insurance giant Aviva made headlines after asking 16,000 staff whether their jobs could be done by a robot. “Five years ago, there was a lot of talk about automation,” says Valerie du Preez, senior consulting actuary and founder of Actuartech, a company that offers data science training to actuaries. “Interestingly, though, we surveyed a group of actuaries globally through Actuartech, and only 17% of respondents said that they have an understanding of the practical application of data science.

“We need actuaries who can do traditional actuarial work to a T, but who also like to think about innovative tools”

“There are also other benefits to data science, for example to support analyses and risk management,” she continues. “But the adoption in these areas is slow.”

To help close the knowledge gap, the IFoA’s Certificate in Data Science course introduces concepts, tools and techniques, and their relevance within an actuarial context. Colin Thores, an education actuary at the IFoA, says: “The IFoA is there to deliver what its members need, and we can add value by setting out principles and ethical frameworks in addition to providing data science-focused education.” Looking beyond data science, he says, “one of the big issues is many actuaries don’t understand the more complex computer science concepts. That’s something that we, as a profession, need to think about more.”

Employers also have a role to play, though performance has been varied. According to Actuartech’s recent benchmarking survey,

Du Preez says, “the majority of actuarial teams offer access to some level of non-actuarial specific data science training, either through company-wide initiatives, or through providing access to online courses. But we also saw some extremes, including teams with no strategy and just letting individuals guide themselves, as well as more advanced actuarial teams tackling upskilling in a more strategic way, linked to the strategy and purpose of that team, in order to add value to the organisation.”

Meanwhile, actuaries with advanced skillsets are increasingly attracted to new opportunities, including in ‘wider fields’. “Many candidates perceive that the experience they are getting is not as ‘advanced’ as what they could get in other sectors,” Flanagan says. “They see the use of Excel as antiquated and are seeking experience in the newer languages.”

Some are leaving the profession altogether – dropping out of the qualification process or allowing their IFoA membership to lapse, and instead choosing to work as software engineers at tech firms or as quantitative analysts at banks and energy companies.

“It is a shame to see highly skilled actuaries leave the profession because they cannot get the exposure to advanced technology on a day-to-day basis,” Flanagan continues.

Du Preez believes that actuaries who want to embrace data science need to better explain why it is relevant and appropriate. Actuartech recently hosted a data science competition in which participants were asked by a panel of risk managers to explain their reasons for building particular models. “Why did you decide to use said language or said machine learning model? How do you explain the link between said modelling technique and your finding and business recommendations? Will you deploy or use this model in production? If so, why? If not, why not? What are the risks that you then face? These were some of the questions asked because, when faced with real business implications, actuaries need to be able to explain why.”

Du Preez also sees a lack of clear performance metrics as a challenge to articulating the benefits and risks of the newer tools and techniques. “It is difficult to define the business case if you can’t measure the opportunity cost,” she says. “What’s the value if just using Excel is fine? But if organisations start to record key risk and value metrics around things that go wrong, and processing time, then you can justify investing for change.”

Bujok-Stone agrees, and provides a real-life example. “We worked with a client to predict outliers in their data. It was a small piece of work and we showed it to their data team. What made it interesting was that we were then able to extract a sample of policies and policy best estimate liabilities, and pair that with our results. Now, not only were these outliers, they were outliers with a metric that people cared about. People could now see the reserve based on the data point being an outlier, and they could rerun the reserve based on it not being an outlier.

“Because they could physically see a reserve changing, people woke up and this client has now looked to industrialise that process. If you’d just looked at it for pure data’s sake, it would have got less attention.”

Are there dangers in open source?

The discussion moves onto open-source languages such as Python and R. While these minimise costs and are constantly improved by their large developer communities, they can be associated with risk due to their changing nature. “If a project is not sufficiently sponsored, or the open-source contributors are not able to monetise it, they could abandon the project. Or they might make breaking changes that could affect your systems,” Scharnick says. “However, programming and data science actually offer the potential for better data governance controls compared to many existing approaches such as Excel.”

Bujok-Stone concurs. “There was nervousness around this when we started working with Python five, six years ago.

But in reality, users have the ability to lock in versions. Git and DevOps are examples of version control management. Packages are one of the great benefits of open-source languages. They can be subject to change, but packages have version control. You also don’t have to push through changes blindly; you can put some control around that. Plus, as with any model we build, we should incorporate reasonableness checks and exceptions. We can use our usual control framework to build these models too.”

Thores recognises that the actuarial community – particularly in the UK – has primarily been focused on traditional areas of actuarial practice (life, pensions, general insurance and so on). The IFoA encourages its members to branch out to new areas, while appreciating that this might not be for everyone. “We discuss with thousands and thousands of members, trying to understand what they want,” he says. “Not everybody wants to be a data scientist. For some, it’s about not being left behind. It’s about not having so much of a language barrier that they are not invited to project teams.”

For Bujok-Stone and Flanagan, the threat of not keeping up extends beyond the individual. Bujok-Stone recalls a recent conversation with a rising actuarial student who had developed various apps in JavaScript. “All of his friends who did maths at university have gone to Google, Amazon and the like. They’ve chosen to go and work in heavy tech. If we are not giving maths grads a pathway to these new areas, that is a big threat to the profession and industry.”

Flanagan agrees, adding that the threat is immediate. “This isn’t two or three years down the line. It’s right now.”

If harnessed and used in an appropriate way, though, the new tools and skills can be an opportunity. “It’s our duty to be competent, and one of the enablers of being competent is making sure you know what the right tools for the job are, and how and why they should be used,” says Du Preez. “Together with the skills we’ve learned as actuaries from a compliance and conduct perspective, these techniques can help us add value and manage risk. We want to open those opportunities.” Ruolin Wang is editor of The Actuary magazine

Colin Thores is an education actuary at the IFoA

This article appeared in our June 2022 issue of The Actuary.
Click here to view this issue
Filed in
General Features
Topics
Data Science
Global
Careers