A tale of two countries: India and Singapore’s experiences during COVID-19 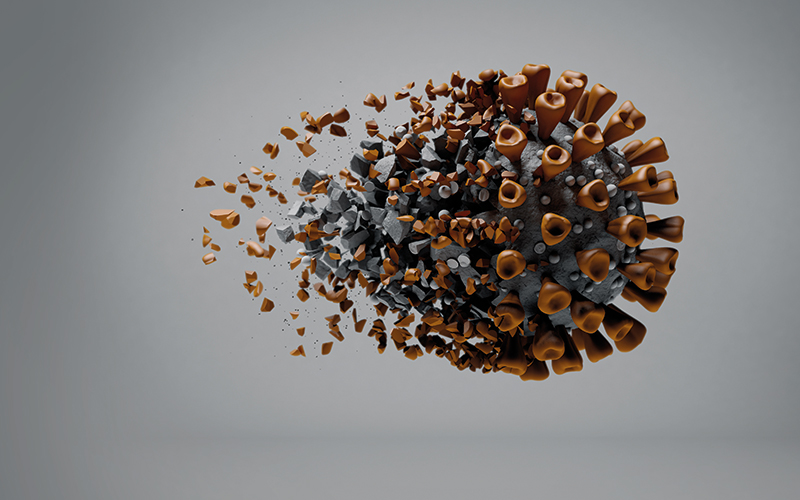 A very small and tightly administered island country, Singapore’s management of COVID-19 has been interesting. Having fought the spread of the SARS virus in 2003, H1N1 in 2009 and Zika in 2016, many Asian countries had invested heavily in the management of infectious diseases, including planning for future disease outbreaks. When Covid-19 started spreading around the world, Singapore was able to contain the virus with minimum disruption to daily life in the first few months of the outbreak. There were fewer lockdowns, but lots of regulations on group sizes, masks and social distancing.

The number of cases was relatively high in the first wave, but most were concentrated in the dormitories that provide close living conditions for about 200,000 foreign workers, which are at considerable risk of disease outbreaks. In April 2021, when Bloomberg ranked Singapore top in its Covid Resilience Ranking, Singapore had only 30 cumulative deaths (for a population of approximately 5.5m).

However, when the Delta variant penetrated Singapore’s border restrictions, it spread quickly. The country’s success during the first wave meant that most residents had little experience of the virus. The government was forced to reapply restrictions on social gatherings, along with careful management of Singapore’s limited hospital and intensive care unit beds. The vaccination drive was kicked off in high gear, and by the end of August 2021, 80% of the population had received two doses (Table 1). However, the death toll continued to rise, and at the time of writing this article, with the Omicron wave not having taken its full form, there have been 963 deaths. 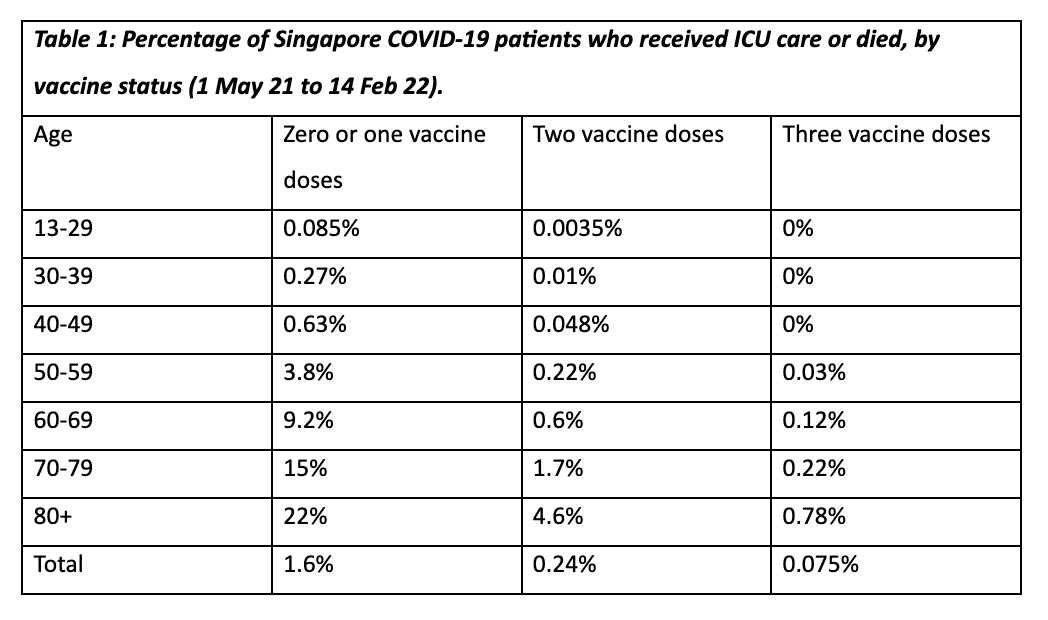 During this period, the government made drastic changes in its approach to managing the pandemic. Singapore soon realised that the zero COVID policy was unachievable, and that it had to learn to live with the virus. Its economy is highly dependent on trade, business travel and tourism, so even though internal social gatherings are still considerably limited, the country has opened its borders to vaccinated travellers. This was made possible by deploying booster doses, limiting social gatherings and extensive use of COVID-19 tests.

Singapore’s insurance industry has seen a mixed impact from COVID-19, and most of the impact has not yet been fully experienced. The periods of restrictions led to fewer motor claims, caused by the lower amounts of traffic. However, credit insurers have increased scrutiny of new policies, and exclusions for communicable diseases are becoming common in liability policies. There has been a higher demand for health insurance, especially those affecting lives. Insurance companies have also faced higher volatility in investment returns during this period, adding to the headwinds. 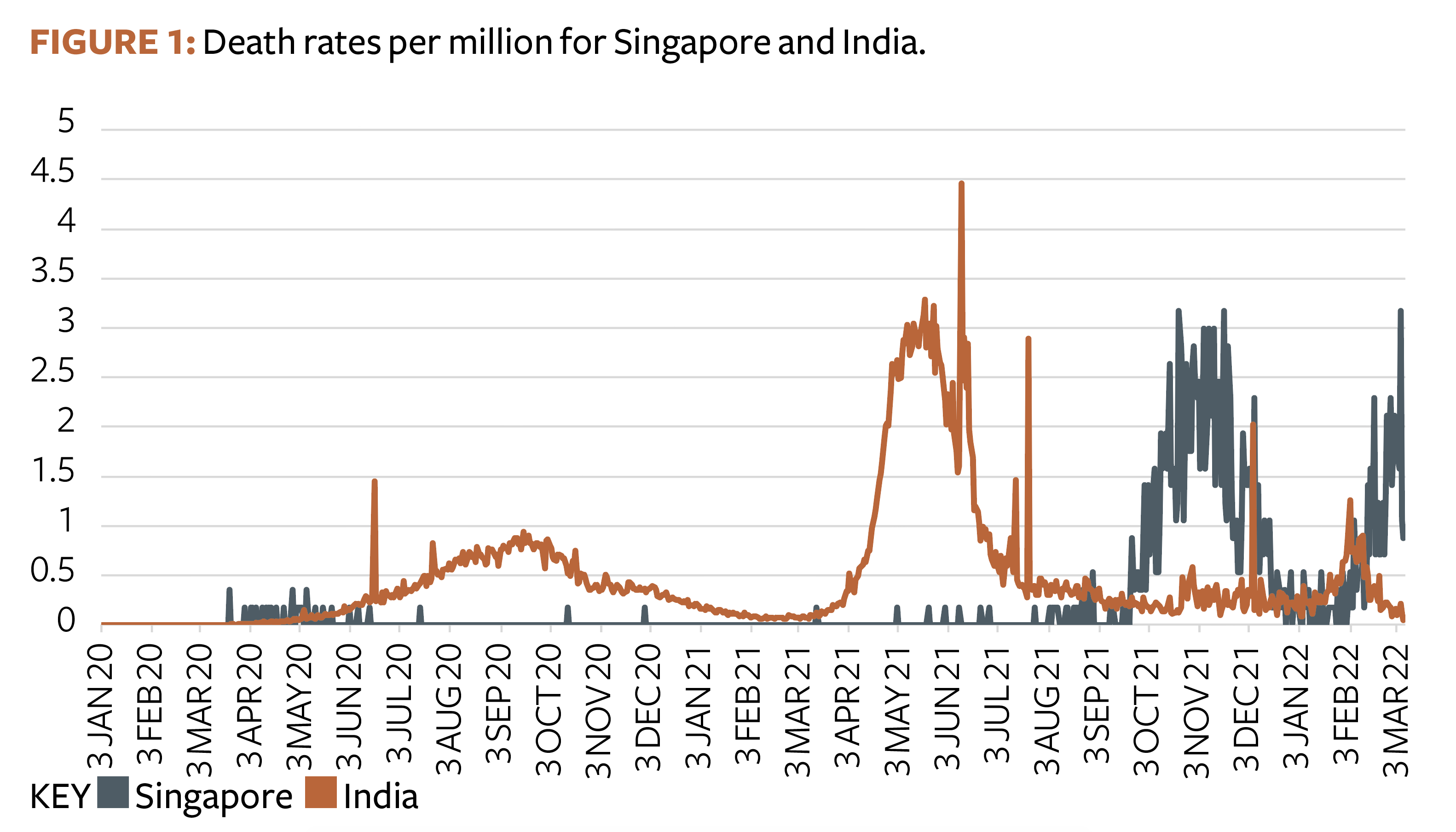 At the other end of the spectrum in terms of size and population is India, which has nearly 4,572 times Singapore’s land area and 250 times its population. Its size, government structure, regional diversity and non-uniform population spread made it impossible for the government to apply one set of rules to everyone. Having learnt this during the first wave, the second and the Omicron-fuelled third wave measures were largely driven by local governments, taking local conditions into account. India’s 28 states and eight union territories, each with different demographics and health infrastructures, saw infections peak and slow at different times.

The country has seen alternating waves of infections and relief, economic downturns and revivals, and vaccine hesitancy followed by a sudden demand for and spurt in vaccination. This period presents many interesting discussion-worthy topics for the country, but there were significant changes, trends and innovations specifically within the insurance sphere.

Traditionally, Indian society has been mildly distrustful of insurance – evident from the poor insurance penetration rates seen in the past decades. The argument heard most often was that ‘insurance pays out only in an eventuality’, with the premium being treated as a loss if that eventuality did not happen. India suddenly becoming the second most active Asia-Pacific country in terms of searching for and purchasing health insurance was undeniably an impact of COVID-19; the disease raised awareness of the support that insurance can provide in times of crisis.

The Swiss Re Global Consumer Survey found that 64% of Indians expressed a concern for mental health – the highest proportion in the Asia-Pacific region. One in five people surveyed in Mumbai and Bangalore admitted that they were ‘barely coping’ with stress during the pandemic. Many have cut back on home, motor and life insurance premiums to ease tightening finances. The demand for higher sum insured policies has gone up from 4%–5% to nearly 50%–60%. This increase has been fuelled by media coverage of COVID-19 treatment costs – especially during the second wave, when health infrastructure was severely stressed. Another enabling factor in the increasing affordability of health cover is that many insurers have started to offer the option of paying premiums in equated monthly or quarterly instalments.

The end of the pandemic is probably not near, and there may be more dangerous variants lurking around the corner. However, both Singapore and India will continue to find unique ways of fighting the pandemic and balancing the impact on the population in terms of mortality, morbidity and economy.

Rajeshwarie VS is head of specialty at Swiss Re Bangalore

This article appeared in our April 2022 issue of The Actuary.
Click here to view this issue
Filed in
General Features
Topics
Health care
Global