An integrated approach to scenario modelling 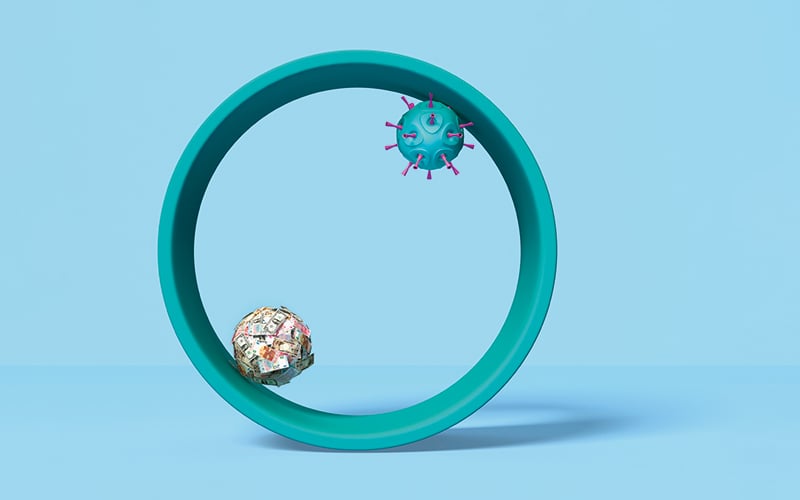 In June 2020, I was assigned a group of actuarial volunteers from various disciplines and countries to tackle COVID-19 scenario modelling, under the IFoA COVID-19 Action Taskforce (ICAT) initiative. Our role was to help actuaries and regulators with tools and analyses that would facilitate scenario modelling for COVID-19 and future pandemics. This would encompass considerations of companies’ assets, liabilities and operations in our respective actuarial sectors. By that point, infections and deaths had gained a global footprint, and lockdowns were widespread. We realised that the complexity of the risk and its varying implications for healthcare, life and general insurance meant we had to look for tools and methods outside our expertise.

Gathering data
We made epidemiological disease spread modelling the foundation of our work, but this was not enough to model the pandemic’s financial impact on insurance companies’ portfolios. COVID-19 infection projections could tell an actuary about a potential increase in claims due to COVID-19-related hospitalisations, but lockdowns also caused non-COVID-19 treatments to be deferred, which initially reduced claims activity. Similarly, disease-spread projections could have been used to trigger recoveries under pandemic coverages, but that would not work for other general insurance lines of business. Lockdowns and consequent global supply chain disruptions had the largest impacts on general insurance exposures. Such impacts were present in business interruption insurance claims caused by lockdowns, trade credit claims caused by supply chain disruptions, and auto premiums reductions caused by restricted travel.

From the outset, it was clear that the international context was important. A government’s response strategy and pandemic preparedness determined, to a large extent, the disease’s outcomes and trajectory in that country. We found that many country-specific socio-ecological factors, such as population density, population movement patterns and travel, influenced disease spread. It was important to understand geography, environmental constraints and living conditions. There were also medical factors, such as a country’s hospital capacity and where those hospitals were located. We had to break down the attributes of different countries to better understand the problem.

We found that an economically developed country with good health infrastructure could sustain much higher levels of hospitalisations at the peak of infections and save more lives. However, on the other hand, most developed countries had large, congested cities with considerable population movement, which guaranteed the fast spread of infection. The speed of a government’s response in imposing lockdowns, and the stringency of those lockdowns, also had a significant influence on a country’s outcomes, and population demographics played an important role. Older populations tended to suffer more severe COVID-19 infections and deaths, as seen in Western Europe. This was also true for populations with high levels of co-morbidities, such as HIV and diabetes, as was the case in South Africa. Many sub-Saharan African countries with younger populations suffered less severe COVID-19 infections and spread.

From observations to assumptions
We could draw many other observations from the data available at the time, but how would we translate those into valid modelling assumptions that would address the impact of COVID-19 on an insurance company? First, we set out to gather what we considered to be the most impactful indicators for COVID-19 outcomes. These needed to come from economic projection data, health data, population data, COVID-19 governmental response data and other sources. We also needed to test the relationships between various observed indicators and ascertain their significance for COVID-19 outcomes. One of our initial studies found evidence that early governmental response was negatively correlated with COVID-19 case count for the 165 countries in our study, based on two indicators – infection rates and the speed of a government’s response from case 1.

We also tried to assess COVID-19’s impact on different industries by analysing profit decline expectations statistics. However, the impact on different industries required the consideration of many other factors, such as macro-economic impacts on currency, inflation, governmental economic backing and consumer confidence. Modelling all these factors and relationships using traditional actuarial techniques would make any model convoluted and complex!

Our research led us to identify potential model types to help us project the impact. We investigated causal mechanical models, agent-based models and neural network-based models. These were helpful for disease spread, but none produced a financial model. For example, the Susceptible-Exposed-Infected-Removed model could factor in lockdowns, vaccines or social distancing, but would still produce disease spread figures as output, from which we would need to deduce a financial impact.

Lessons for climate risk
In 2021, as our COVID-19 research was ongoing, I began to consult on general insurance regulatory stress testing of the financial impact of climate change. I saw that most modelling for climate change relied on the imagined pathways of outcomes. The trajectory of climate change could only be studied over long periods, for example 30 or 50 years. Though this was a significantly longer time horizon than that of COVID-19, where most companies wanted to know how it would play out over a three-year future period, there were strong similarities between pandemic risk and climate change risk. Both had a central feature from which, unlike natural or man-made disasters, they could be controlled, or their impact reduced through government action or population behaviour change. Like pandemics, the financial risk of climate change in our respective sectors relied on climate, social, economic and policy factors.

Climate change modellers found that, to capture the impacts of these factors effectively, they needed to imagine various trajectories (pathways) for them – for example, fossil fuel industries would get smaller and renewables industries larger. This would impact the projection and make-up of GDP, thus affecting a general insurer’s energy exposures and risk attributes. This meant that financial-economic modelling variables would have to be integrated with climate variables. Hence came the integrated assessment models (IAMs), now widely used in the financial modelling of climate change.

The specific mathematical modelling techniques used, model structure and outcomes can vary across different IAM models. Different indicator pathways mean different scenarios. There is thus a need to consider several scenarios under IAMs to really understand the exposure to financial loss. If we think of all the factors impacting the financial loss under COVID-19, we could apply the same logic as climate change and use IAMs for pandemic scenario modelling.

While this thinking is not yet instituted in insurance for pandemic modelling, the parallels with climate change modelling are clear. Disease spread (like climate warming trajectory) can be seen as a pathway that may be affected by social distancing measures or vaccines. Another pathway could represent the effects of a government’s response, and the timing and stringency of that response. Each country’s industrial mix, global trade and lockdown measures would impact other countries’ supply chains and economic activities. We could have different pathways under different scenarios.

This type of impact in climate change modelling is captured by economic growth pathways, represented by gross value added (GVA) to the GDP of each industry. This means that each industry’s proportion of GDP changes over time in the scenario, depending on the carbon emission policy. This thinking could be adapted for pandemics such as COVID-19, although these GVA pathways would have a substantially shorter time horizon – say, three to five years, instead of 20–50 years for climate change.

Insurers are trying to model scenarios for COVID-19 and future pandemics, but data is still emerging and research efforts are ongoing. Given regulators’ progress on stress testing climate change impacts, it is not unlikely that they will suggest or mandate IAMs or similar approaches in future. IAMs rely on forecasts as inputs and will always be subject to uncertainty, but they are arguably the best option for transparent analysis of the factors impacting the financial loss of a pandemic.

This article appeared in our April 2022 issue of The Actuary.
Click here to view this issue
Filed in
General Features
Topics
Environment
Health care
Modelling/software