Changing states: examining the effect of migration on mortality

Dov Raphael examines the effect of migration on mortality, looking in particular at the impact of Russian Jews moving to Israel after the Soviet Union’s collapse 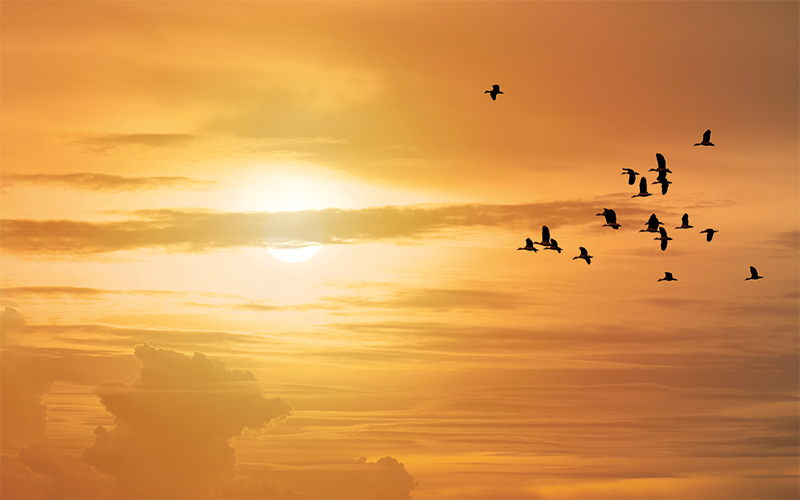 Life expectancy varies by country, but what happens to the life expectancy of people who move from one country to another? Will it be most influenced by their genetics, ethnic background and prior medical history in their country of origin, or by the medical treatment and old-age care in the host country?

Both considerations are valid, but researchers have discovered another factor: the ‘healthy immigrant effect’. Essentially, people who move voluntarily to a new country tend to be fit and healthy. This may be a result of the host country’s immigration restrictions or preference for ‘valuable’ occupations, or because people with chronic medical conditions are more likely to remain in their country of origin – in actuarial terms, external selection or self-selection. However, as with other types of selection, the effect wears off over time and life expectancy becomes closer to the host country’s mortality patterns.

A study published in 2004 found that immigrants to the US had a significantly higher life expectancy at birth than the US-born population: 3.4 years longer for males and 2.5 for females. However, the risk of disability and chronic morbidity rises with increasing length of residence in the US. A similar situation was reported in Canada in 2011, but the study points out that the source of immigration has shifted from Europe to other countries over time, so it is important to analyse the healthy immigrant effect by birthplace and period of immigration.

The healthy immigrant effect also appears in a 2009 New Zealand study and a 2019 French study, as well as a meta-analysis covering 258 million migrants that was published in The Lancet in 2018. The latter, ‘Global patterns of mortality in international migrants: a systematic review and meta-analysis’, makes some important points: “[The immigrant] advantage persisted across the majority of ICD-10 disease categories. The mortality advantage identified will be representative of international migrants in high-income countries who are studying, working, or have joined family members in these countries. However, our results might not reflect the health outcomes of more marginalised groups in low-income and middle-income countries.”

The proportion of migrants in and out of a country each year is usually relatively small, and even taking into account ‘healthy migrants’, the effect of migration on overall mortality improvement trends in the population would be negligible. However, there are some exceptions. 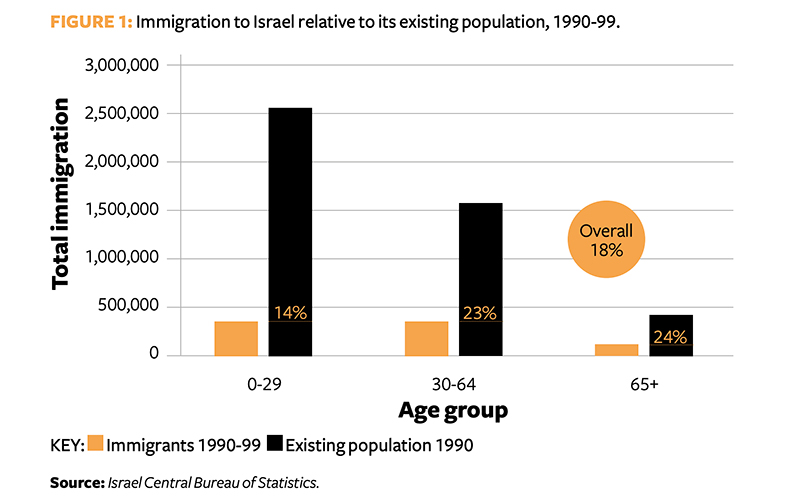 In 1991, the Soviet Union collapsed, leading to significant emigration from its constituent countries; consequently, during the 1990s, Israel absorbed nearly a million Jews from the former Soviet Union – the equivalent of 18% of its 1990 population. Among the elderly population, this proportion reached 24% (see Figure 1). Most of the migrants were from Russia or Ukraine, which at the time had similar life expectancies to one another.

In 2009, the chief demographer of the Israel Central Bureau of Statistics, together with other researchers, published the study ‘Noncommunicable disease mortality and life expectancy in immigrants to Israel from the former Soviet Union: country of origin compared with host country’. It noted the characteristics of the immigrants: “The proportion of highly educated professionals among them was much higher than among the Israeli population, but so was the proportion of single-parent families and elderly people. Although these migrants have enjoyed generous conditions of reception, the new country’s health system, standards of medical care, lifestyles and environment have differed greatly from those in their country of origin.”

Figure 2 compares life expectancy in Russia and Israel. From a simplistic calculation, without considering the healthy immigrant effect, the disparity should have reduced life expectancy in the Israeli population by about 1.6 years for males and 0.7 for females. Certainly, an influx of close to 20% of the existing population might be expected to have some impact. In retrospect, there was a minimal impact around 1992 – the time of the largest wave of immigration – but after that there was no noticeable effect, and longevity continued to improve as before. 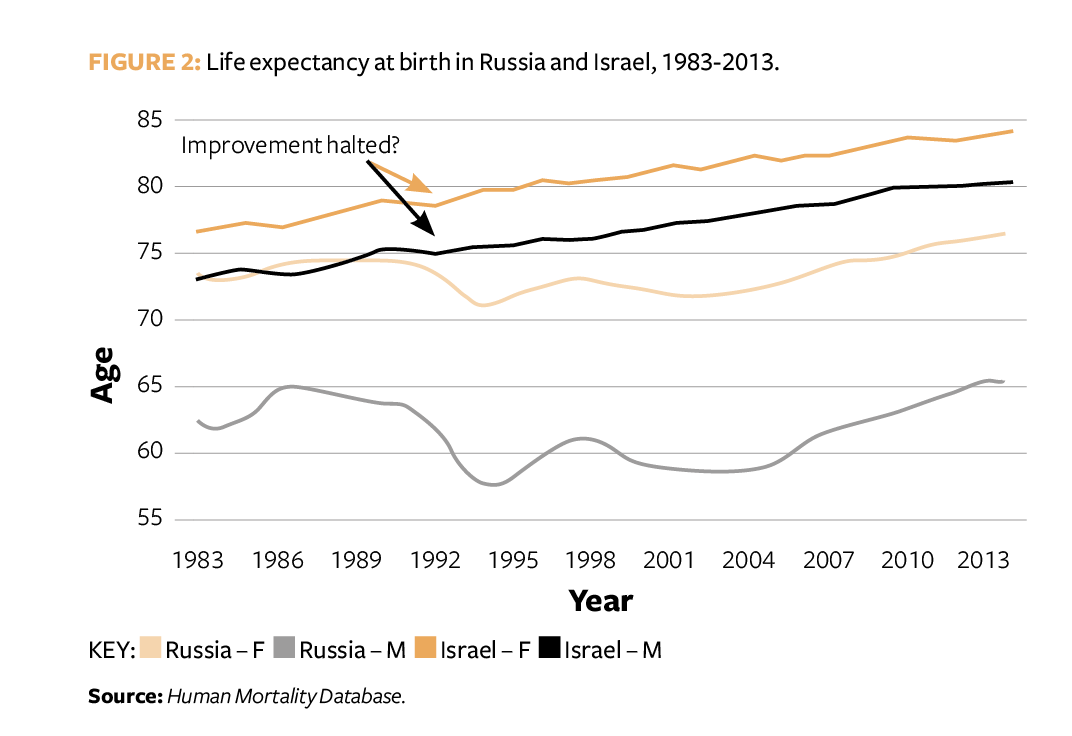 More detailed investigations showed that the life expectancy of the immigrants was indeed considerably higher than that of Russia’s general population, but slightly lower than that of the veteran Israeli population. The 2009 Central Bureau of Statistics study found that the immigrants had considerably higher mortality from external causes and from some noncommunicable diseases such as cancer, compared with other Israelis.

Another question relates to the ‘gender gap’ – the difference between female and male life expectancy. The gap in Israel has historically been much lower than in other countries. Various explanations for this have been proposed, including a higher prevalence of breast and ovarian cancer, as well as the enhanced risks for females that are associated with high fertility, both of which would depress female life expectancy and thus lower the gap. One hypothesis was that a relatively high proportion of the Israeli population are immigrants, and much of the stress of adjusting to a new country falls on the women in the family. However, this seems to contradict research in other countries, which indicates that the healthy immigrant effect applies to both men and women.

In Figure 3, it is hard to tell if immigration had any appreciable effect. During the period of immigration, Israel’s gender gap rose from 3.5 to 4.4, but then gradually declined again to 3.7 in 2019. 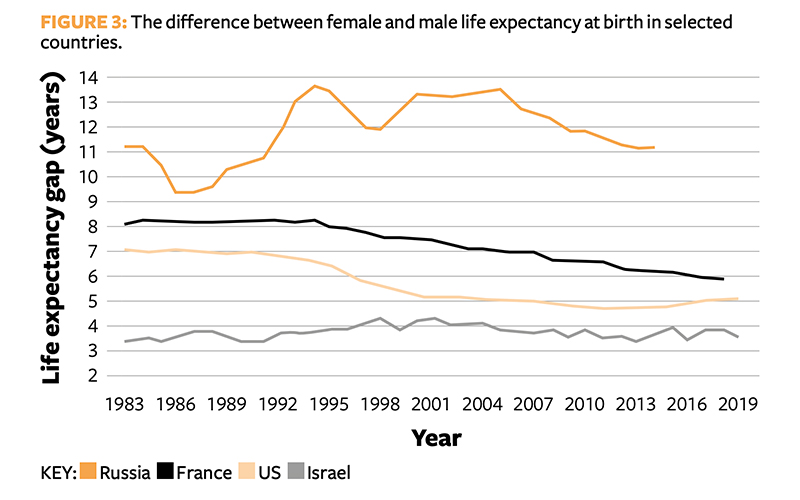 Another point worth noting is the ethnic and geographical diversity found within large countries such as Russia, and the consequent difficulty of applying country-wide mortality to a specific sub-group. One of the reasons for low male life expectancy in Russia is the high prevalence of alcohol abuse. Culturally, Jews are not known to be great drinkers, which could explain why Jewish Russians had a higher life expectancy than non-Jewish Russians.  Indeed, a study found that the life expectancy of Jews living in Moscow in 1995 was similar to that of Israeli Jews.

There are often ethnic disparities in various populations. In an insurance or pension context, differentiation in premium rates or reserves based on ethnicity would be unacceptable and probably illegal, but for estimating mortality changes over time, there may be some value in considering the impact of a changing ethnic mix – whether due to migration or fertility. In Israel, improvement factors published by the regulator use data going back to 1983, but the most recent years, in which immigration was relatively small, are given a higher weight.

One of the benefits of immigration from Russia to Israel has been in the actuarial profession. Many young immigrants studied actuarial science in Israel and are making a valuable contribution to the insurance and pension industry.

This is an updated version of a presentation given to the International Actuarial Association’s Mortality Working Group in St Petersburg in 2016.

Dov Raphael is a consultant actuary and past president of the Israel Association of Actuaries. He was a member of the International Actuarial Association’s Mortality Working Group from 2012 to 2021.

This article appeared in our March 2022 issue of The Actuary.
Click here to view this issue
Filed in
General Features
Topics
Health care
Global
Life insurance