Peering ahead: Can mutualisation work for general insurance? 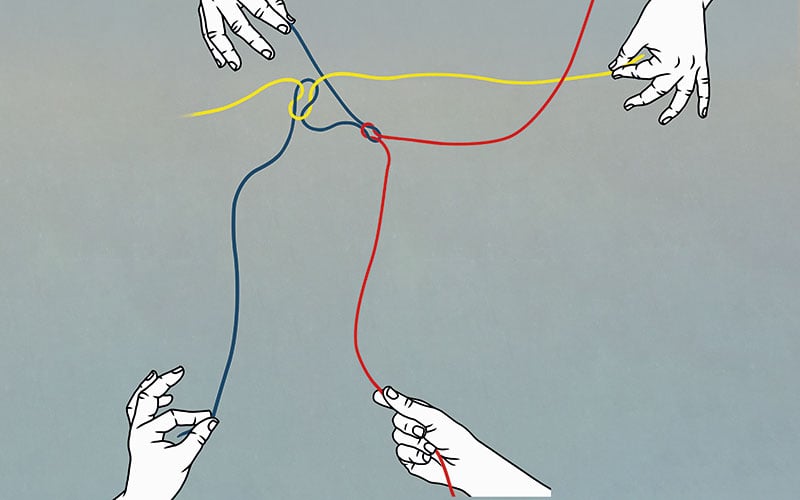 The insurance sector’s progressive demutualisation has broken its link with the ancestral mutual aid principle, where the contributions of many balance the misfortunes of a few. The development of peer-to-peer (P2P) insurance communities, in line with the sharing economy, is an attempt to remedy this situation.

P2P insurance refers to emerging technology-based risk-sharing networks where a group of individuals (such as friends, family members or individuals with similar interests, like members of the same profession or patients suffering the same disease) pool their resources to insure against a given peril.

Several insurtechs promote this approach. Their dominant business model essentially reduces to a shared, or pooled, deductible, in which the lower layer is retained by the community and the upper layer is transferred to a partnering (re)insurance company. Thanks to the risk-reducing effect of pooling, participants gain access to higher amounts of retention than they would with individual deductibles. The P2P community also benefits from the (re)insurer’s claim settlement expertise and risk-bearing capacity. The coverage can be sold as a white label product, or the (re)insurer’s brand may be explicitly mentioned in the offer.

In practice, participants pay a deposit ex ante, with the guarantee that the final amount due never exceeds this down payment. Part of the deposit feeds a common fund, while the remainder is paid to the (re)insurer. If the common fund is insufficient to pay for the claims, the (re)insurer pays the excess. Conversely, if the pool has few claims, the surplus is given back to the participants or to a cause they care about. The ‘cash-back or give-back’ mechanism thus operates ex post.

This new approach to insurance is expected to mitigate the conflict that is inherent in commercial insurance, in which insurers keep the part of premiums that is not paid out for claims, and to lower prices. Actuarial modelling can also support P2P insurance for situations in which communities are partitioned into teams, where a high level of solidarity is desirable within teams but to a lesser extent across teams.

These new systems pose interesting questions in terms of risk sharing. With cash-back – as well as with give-back, when participants can choose between different causes they care about – it is important to allocate the surplus individually and in a fair and transparent way. When the pool is homogeneous, it is natural that every participant gets an equal part of the surplus. However, it is considerably more complex to find an appropriate risk-sharing rule for heterogeneous cases.

In this setting, one possibility is the conditional mean risk-sharing rule, in which each participant contributes the expected loss he or she brings to the pool, given the total loss that is experienced by the pool. This turns out to be particularly effective within P2P insurance communities. It means risk-averse participants are always ready to welcome new members into the pool, whatever the distribution of their losses, because the sharing rule attributes the fair amount of contribution to every member. In addition, pure premiums can be obtained as limiting individual contributions in an infinitely large pool.

From a pedagogical perspective, this approach provides actuarial instructors with the missing link from the homogeneous case, where total losses are evenly distributed and pooling benefits are clear from the law of large numbers and central-limit theorem, to the general heterogeneous case. It also helps to formalise the fixed premium guarantee included in commercial insurance, and demonstrates that accurate risk classification does not conflict with mutual aid.

P2P insurance is not just a few insurtechs operating online: established insurers could also embed this approach into a regular insurance policy, including a participation to the surplus. This mechanism has been applied in the life insurance industry for many years, but can also apply to property and casualty insurance. In particular, our paper ‘Risk sharing under peer-to-peer property and casualty business models’ (bit.ly/RiskShare_P2P) proposed to extend it to the lower layer of total losses experienced by a policyholder community.

Instead of simply transferring risk to the insurance company, policyholders take part of the aggregate risk of the group they chose to adhere to, and take back a fraction of the end-of-period surplus or attribute it to their chosen charity. This participating policy model somewhat reconciles insurance with the mutual aid principle at its origin. Sharing the lower risk layer among policyholders is an effective way to access the best of the two worlds: protection by equity capital for the higher layer, with mutualisation for the lower layer.

Insurance operations are often very opaque, but the new generation of participating contracts should make explicit the split into taxes, intermediary’s commission, claim costs (including settlement expenses, on an incurred basis), running expenses and shareholders’ profit (better presented as cost of regulatory capital), with calculations based on up-to-date actuarial modelling. A fully transparent account can then be communicated to policyholders, with surplus distributed or allocated to a common project. This demystifies insurance (up to outputs of actuarial models calculating incurred losses or allocating capital) and revives policyholders’ feelings of belonging to a community.

It is also important to adopt an appropriate pricing mechanism by charging insurer’s fees for the lower layer that are equal to a percentage of the corresponding benefits paid to policyholders. In this way, interests of both parties are aligned, and agency problems at the heart of commercial insurance are solved.

Parallels with the electricity market seem instructive. Consumers joining P2P insurance communities are comparable to those who are part of local energy communities that provide inhabitants with renewable electricity produced nearby by their members, while keeping links with established energy providers as a safety net in case of insufficient power. We believe there is a strong potential for a P2P insurance offer developed along these lines.

If the energy sector succeeded in attracting people’s interest to turn them into prosumers, it would be a shame if insurers were not able to re-enchant mutual aid through new risk-sharing solutions. The give-back mechanism, and the adoption of insurance fees proportional to benefits, should restore the spirit of insurance: improving customer loyalty with the feeling of belonging to a community, and helping its less fortunate members.

A list of further reading can be found at the online version of this article at bit.ly/Peering_ahead

Michel Denuit is a professor of actuarial science at UCLouvain, Belgium, and a co-founder of Detralytics, a consulting office based in Brussels and Paris

Christian Robert is a professor of actuarial science at ENSAE-IPP, France, and scientific director at Detralytics

This article appeared in our January/February 2022 issue of The Actuary.
Click here to view this issue
Filed in
General Features
Topics
Risk & ERM
General Insurance