A duty of care: how actuaries can help solve the issue of social care

Colin Redman takes a look at the UK government’s plan to fix social care, and the role actuaries can play in helping to solve the issue 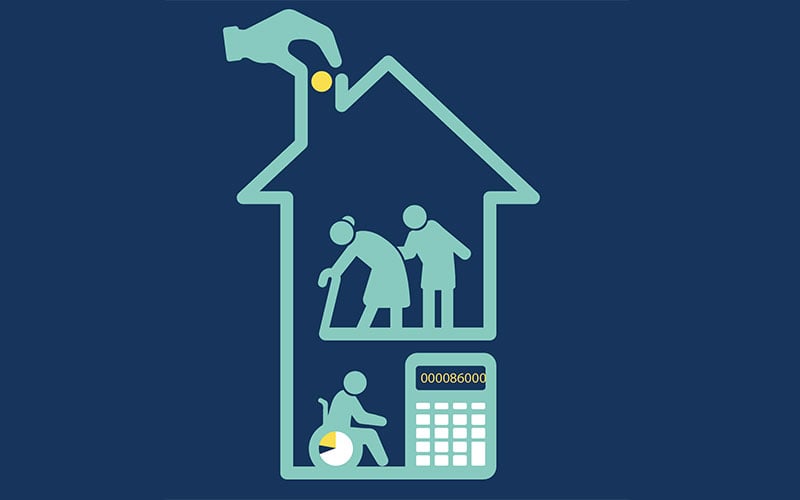 On 24 July 2019, in his first speech as prime minister, Boris Johnson could not have been clearer about his intention to find a solution to one of the great issues in our society: “I am announcing now – on the steps of Downing Street – that we will fix the crisis  in social care once and for all, with a clear plan to give every older person the dignity and security they deserve.”

This was a bold pledge: for decades, the issue of fixing social care in England and Wales has proved too big and difficult to resolve for both Labour and Conservative governments.  Ending the worsening scandal of care service under-provision is one of the most expensive of promises to deliver.

“In real terms, government expenditure on adult social care is still significantly lower than a decade ago, despite the growth in the elderly population”

The crisis in care

Total government expenditure on adult social care fell between 2009 and 2014; levels have subsequently recovered, but in real terms they are still significantly below those of a decade ago, despite the growth in the elderly population.

Past chronic underfunding has produced a chasm of unmet need. Local councils have tightened their eligibility criteria since 2010 in response to deep cuts to their budgets from Whitehall; consequently, 1.6 million people aged 65 and over do not receive the care and support they need,according to Age UK.

As a nation, we are increasingly reliant on unpaid carers – 5.4 million of them. They are mostly spouses and daughters, but also sons, neighbours and friends.It is essential we recognise their contribution and their need for support.

The sector is under enormous pressure. Working conditions for care workers are poor, which results in high levels of staff turnover – reaching up to 40% in some areas. The salaries of the country’s 1.5 million care workers are low, with most earning at or just above the minimum living wage (£8.91 per hour). According to researchers at Skills for Care, there is a recruitment crisis – there are “more than 100,000 posts with no-one to fill them”.

Care companies are being forced to turn down work to support patients as they move from hospital back to their own homes or care homes. Many patients end up staying in hospital longer, putting more pressure on an NHS that is already struggling with COVID-19 and waiting-list backlogs. Domiciliary care in some areas is collapsing.

Underlying inequalities between those on lower incomes and the well-off, and large regional differences in the delivery of services, are further problems that need to be tackled.

The white paper and the plan to reform social care

In December 2021, the government published a white paper on reforming social care. Its vision of choice, control, quality, fairness and accessibility was generally welcomed.

To help pay for social care reforms and provide more funding for the NHS, the government is introducing a new tax – the Health and Social Care Levy – which is expected to raise £30.3bn during the next three years. However, only £5.4bn of this will go to adult social care; much of this extra funding will be used to pay for the new care cap of £86,000 and the introduction of a more generous means test. These reforms will reduce the contributions many have to pay for care, and are welcome, but social care will get very little extra money to deal with the problems that have been caused by past and current underfunding.

A significant concern is that the division of the income from the Levy, which is heavily weighted towards the NHS for its first few years, will continue that way for the longer term, and that social care reform will therefore suffer.

How much will it cost to fix social care?

Will the government’s plan “fix the crisis in social care once and for all”, as Boris Johnson pledged?  The answer is no – not unless a firm commitment is made to provide sustainable funding at the level required to bring about real change.

The Health Foundation, an independent charity, has produced an estimate of what it would cost to fix the crisis in adult social care. Based on their projections, there will be a £7.6bn shortfall in funding in 2022/23, rising to £9bn in 2024/25; this could amount to £14.4bn by 2030/31. This extra money will be needed to meet the expected growth in demand from an ageing population, deal with unmet current demand, and improve care workers’ pay and conditions.

How do we find this extra money? What mix of taxation, insurance and payments for care would be fair?

One option is to allocate the income from the Health and Social Care Levy (expected to raise around £12bn per annum when fully implemented) to meet the whole of the social care shortfall. This would result in a very high proportion of the Levy being allocated to social care, with little available to support the NHS.

There are alternatives if only part of the shortfall is funded by the Levy, as is currently envisaged. For example, the Health and Social Care Levy could be developed and expanded into a national compulsory insurance scheme, as is the case in Germany. Or lessons could be learnt from Japan, which funds its system through a mixture of social insurance contributions that are paid by everyone from the age of 40, employer contributions, general taxation, and co-payments from those accessing the services. Some insurance could be provided by the financial services industry to complement state and personal provision.

In the past, funding shortages have been solved via short-term cash injections and reprioritisation of existing funding. These measures solve immediate problems,but by their very nature they are not sustainable. Effort needs to be put into developing a mix of complementary long-term funding solutions that spread the burden of cost fairly between individual and state, between those who are well off and those who are on low incomes, and between generations.

There is a body of opinion which says that the problems of social care are too difficult to solve, and that the costs of doing so are unaffordable – but the impact of a failing care service cannot be justified, with so many people currently deprived of the care and support they need.

“Properly funded social care will help improve the health, wellbeing and standard of living of all those involved, and will reduce the burden on the NHS”

It boils down to priorities. The shortfall in social care funding is tiny compared to the UK’s total GDP of around £2,150trn. It is also small in relation to the total managed expenditure of the government, which was more than £1,050bn in 2020/21. Annual expenditure on the NHS and social care combined is around £160bn, so an extra £9bn (5.6% of the total) for social care seems possible. We can afford to pay the price if we really want to fix the problem.

Paying more for social care should not be viewed as a cost to society – it should be seen as an investment in its people. Most of the extra cash would benefit  those most in need in our community – people who receive care, unpaid carers and the low-paid who provide formal care. Properly funded social care will help improve health, wellbeing and living standards for all those involved, and will reduce the burden on the NHS. It is arguably the biggest single action the government could take towards its objective of ‘levelling up’. Additionally, those who need care and who provide care would have their lives enriched. Care workers would spend their extra earnings, creating new jobs, increasing tax revenue and reducing their dependency on other benefits. It represents good social policy and good economics.

The role of actuaries

The challenges facing social care are significant, and it will take creativity and commitment to overcome them. Actuaries can play a vital role in helping develop sustainable methods of paying for care that will stand the test of time.

The IFoA Health and Care Board has recognised social care as a key theme in the current session, and a working party has been established to conduct research. This will only be successful with the help of more committed and passionate volunteers. If you have an interest in social care and would like to contribute, please make contact via Caroline Winchester at the IFoA.

This article appeared in our January/February 2022 issue of The Actuary.
Click here to view this issue
Filed in
General Features
Topics
Health care