Rising to the COP26 challenge

The COP26 climate summit achieved more than some expected, but less than was required. Chris Seekings reports on the challenges and opportunities for the actuarial profession 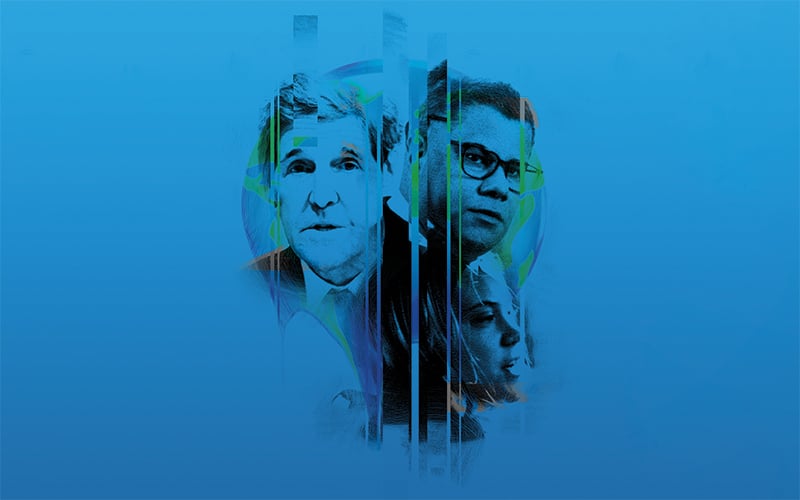 Louise Pryor’s feelings on COP26 were shared by many when the two-week summit drew to a close last month: “Not as good as we hoped it would be, but definite progress,” said the IFoA president.

It was inevitable that the conference would fail to deliver every desired outcome, with negotiators each having to prioritise their own country’s specific challenges against a backdrop of intense pressure from powerful fossil fuel lobbying groups.

No concrete action was agreed on finance for poorer countries in need of support to deal with the ‘loss and damage’ caused by climate change, despite wealthier nations already breaking their promise to provide US$100bn per year by 2020. In addition, analysis suggests that the policies agreed at COP26 will still lead to temperatures rising by more than 2°C above pre-industrial levels.

Nevertheless, the commitments made, if realised, will flatten the curve of future greenhouse emissions globally, and there is renewed optimism that the goals of the Paris Agreement may still be within reach.

“COP26 isn’t the be-all and end-all,” Pryor explains. “What actually happens depends on the actions taken on the ground, not the words that are said. It is not just national governments that can have an impact – there is a lot of work going on at the local level and corporate level, and there is a lot of work for actuaries, too.”

One of the most eye-catching announcements of the summit came from UK chancellor Rishi Sunak, who proclaimed that the country will become “the world’s first net-zero-aligned financial centre”. He unveiled new requirements for financial institutions and listed companies to publish transition plans that detail how they will adapt to “rewire the entire global financial system for net zero”.

“At the stroke of a pen, they have extended the purpose of financial services so that they not only underpin the economy – allowing people to save money, be insured, make transactions and so forth – but also deliver real-world emissions reductions,” says Sandy Trust, chair of the IFoA’s Sustainability Board. “The significance of making it mandatory cannot be overstated. I think it’s absolutely massive for financial services and the UK.”

The chancellor also announced that more than 450 firms from 45 countries have now committed to align more than US$130trn with the 1.5°C goal of the Paris Agreement, through the Glasgow Financial Alliance for Net Zero (GFANZ). This represents around 40% of the world’s financial assets, and will  create a huge pool of cash that could fund efforts such as the transition away from coal, the shift to electric cars, and the mass planting of trees.

Mike Clark, who represents the IFoA as a volunteer member on the Global Advisory Council of the Sustainable Finance Programme, run by the Smith School at Oxford University, had a modest role to play in the formation of GFANZ. He warns that these commitments will come under intense scrutiny. “The next thing will be evaluation of commitments from members of the individual groups that form GFANZ, such as the Net Zero Asset Owner Alliance,” he explains. “If we are going to make the system evolve, we don’t just need people making good pledges. I am more interested in the behaviour of the finance sector and regulators down the road. The World Benchmarking Alliance may emerge to develop a framework to assess members’ progress, as there is a massive accountability issue in the system around greenwashing.”

More than 24 financial initiatives were announced at COP26 for helping to mainstream and scale climate-related reporting, risk management, investment returns and the mobilisation of private finance to developing economies. Mark Carney, UN Special Envoy for Climate Action and Finance, said that these could deliver the US$100trn of investment needed for clean energy during the next three decades.

The initiatives included the IFRS Foundation’s commitment to form an International Sustainability Standards Board (ISSB) to develop “a comprehensive global baseline of high-quality sustainability disclosure standards”. It is hoped that this will make it easier for investors to compare all corporate environmental credentials.

“There is a high degree of confidence in the veracity of financial information used by the markets, but the same is not true today of environmental, social and governance (ESG) information,” Trust says. “Corporates are reporting inconsistently. One might report on water use, for example, and the other may not. Investors, actuaries and pension schemes making decisions on that data have to fill in the gaps as best they can. The inception of a global standard setter on ESG is seminal, and I hope it delivers effective sustainability standards so we are confident with the data, and so it is useful.”

Due to the momentum around net-zero emissions worldwide, corporate reporting to date has largely focused on climate. The new ISSB will force more companies to take account of wider risks.“There is a disconnect between societal risk and the way risk is priced in the financial world,” Clark explains. “If you look at how the EU taxonomy was designed, it was looking to protect its citizens, but appointed a group of financial people to do the initial work. The ISSB will begin to address this, so corporate reporting assesses a wider risk perspective around the Sustainable Development Goals, with big implications for auditors and accountants.”

The Glasgow Climate Pact was struck on the final day of the summit, and includes the first ever international agreement to reduce coal use, although the language was watered down from “phasing out” to “phasing down” after a last-minute intervention from India. COP26 president Alok Sharma expressed anger over the changes to the text, and said: “I apologise for the way this process has unfolded, and I am deeply sorry.”

Pryor believes it’s better to focus on the positives. “I think it was good to get any mention of coal in there at all. I would rather have seen a phase-out of fossil fuels altogether. What do I think about the US and UK not mentioning oil? You have to expect it, I’m afraid. It was great to at least see the US playing a leadership role, and the worry is that that could change back quickly.”

India also committed to reach net zero by 2070, and while this doesn’t match the ambitions of many other countries, it’s the first time the nation has come forward with such a target. “It is better than nothing, and the hope is that it will come forward as time progresses,” Pryor says. “Other countries may be net negative by then, so it may all balance out. You can’t expect everyone to hit 2050 spot-on individually – it’s the world collectively that matters.”

The US and China signed a declaration agreeing to increase co-operation on tackling climate change during the next decade, and more than 100 countries – representing 70% of the global economy – pledged to cut methane emission levels by 30% by 2030. World leaders also agreed to meet again to “revisit and strengthen” their 2030 Nationally Determined Contributions by the end of 2022 – three years earlier than previously intended.

Another key announcement included a commitment by more than 100 countries, containing 85% of the world’s forests, to halt and reverse deforestation and land degradation by 2030. This is to be supported by US$7.2bn of new private sector funding. “Nigel Topping, the high-level champion for climate action at COP26, suggested that investors should be looking to eliminate agricultural commodity-driven deforestation from portfolios by 2025,” says Trust. “You could argue that even that’s too late, but I would like to see financial institutions set 2025 deforestation-free goals in their transition plans.”

COP26 also raised questions around the role that young people should play in future negotiations – particularly young girls, who are disproportionately impacted by climate change worldwide. Youth climate activist Greta Thunberg criticised the summit as little more than a greenwashing exercise, saying: “Blah, blah, blah, this is all we hear from our so-called leaders – words that sound great but so far have not led to action.”

Looking ahead to next year’s summit in Egypt, Pryor believes it is important to listen to these young voices. “We can’t do it without them. Absolutely. Everybody who is affected needs their voice to be heard – not just world leaders and corporate leaders, it’s all of us. Downplaying the indigenous voices is also a big mistake. Next year, we need to see a ratcheting down of emissions. I wouldn’t expect everyone to do that, but

I hope that the big players do – we need to keep the pressure up.”

Clark is also well aware of the collective effort needed, and the importance of looking beyond sweeping political statements. “All these announcements are helpful, and I support them, but we have to separate the political messaging,” he says. “The Climate Change Committee has made it clear that there’s a big gap between UK policy and what is needed. What politicians and governments need to do across the world is change the risk rules so some investments are more attractive, and other less so. That will change the way companies such as ExxonMobil and Chevron are run.”

One of the key roles for actuaries will be looking at how best to create transformative, real-world changes today, assessing how the trajectory of business activity affects the world tomorrow. “It’s a complex and difficult problem, but one actuaries are extremely well-suited to solving, estimating how risks will evolve in insurance and investments,” Trust explains. “We need to evolve our toolkit and skillset to deliver on that, but it’s an important opportunity for actuaries, which the profession needs to embrace. If we don’t, it’s difficult to see how we continue to be relevant.”

This article appeared in our December 2021 issue of The Actuary.
Click here to view this issue
Filed in
General Features
Topics
Risk & ERM
Environment
Global