Rated 0: Getting ready for Ogden changes

Mohammad Khan, Francisco Sebastian and Andrew Corner share the Ogden Discount Rate Working Party’s findings on a potential new rate, and whether the insurance sector is prepared for one 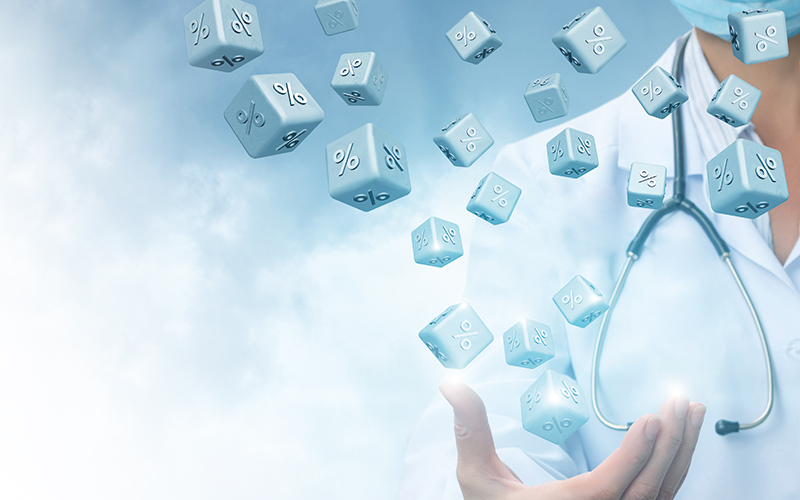 The Ogden discount rate is set by the British government and prescribes the discount rate to be applied in the calculation of bodily injury claims. It was last reviewed in 2019 for England and Wales, being increased from -0.75% to -0.25%. This decreased the lump sum payments paid by insurance companies to bodily injury claimants. The Government Actuary’s Department (GAD) suggested that a +0.25% rate for England and Wales would give equal chances of a claimant being under or over-compensated. The government then decreased the rate by 0.5% to give an approximately two-thirds chance of a claimant being fully compensated. Scotland and Northern Ireland have a separate process for setting their own discount rates.

The government has said it will revisit the Ogden rate every five years, at most; this means the next rate must be revised by 2024 at the latest. This seems like a long time, but given the average six-year life span of a large injury claim, roughly half of the large claims open at year-end 2021 might be expected to settle on a future discount rate. However, given the uncertainty in UK investment markets and the fact that a number of insurance companies have material exposure to Ogden-exposed liabilities, many companies are considering whether they should allow for a change in the methodology and estimation of the rate within their reserves.

The IFoA’s General Insurance Practice Area established the Ogden Discount Rate Working Party to consider issues and uncertainties relating to the implementation of any new Ogden rate. Here we set out some of our initial findings – including what would happen if you replicated the original GAD analysis, research into the dual rate-based methodology, and the outcomes of a survey on practice across the market. The survey was sent to chief actuaries and heads of reserving in order to understand their reserving approach to Ogden-impacted business. We have also covered our findings in a recorded IFoA webinar.

What did we find?

The working party wanted to not only replicate what had been done before, but also consider the problem that the Ogden rate tries to solve: what is the appropriate discount rate, implied from a suitable basket of investments, for an injured party to invest in to meet their losses and costs during their remaining lifetime? We therefore tried to replicate GAD’s analysis, and also adjusted certain areas to see the discount rate’s sensitivity to changes. We did this by:

Our initial findings are that:

The alternative methodology we have explored is based on three sets of notional liabilities extending over 10, 20 and 30 years. For each set, we estimated an efficient frontier via an optimisation process with an objective function that minimised the standard deviation arising from the joint asset and liability position for different levels of expected return.

The differences between the efficient frontiers estimated for the 20 and 30-year timeframes were minimal. Based on our modelling experience, the results from any optimisation based on a timeframe horizon above 30 years are very similar to those based on 30-year horizons. We therefore used the 30-year horizon to represent the rational behaviour of a claimant with investment horizons exceeding 30 years. Bearing in mind the similarities between the points at 20-years and above, we built the discount rates based on the 10 and 20-year notional liability streams. The intermediate points were linearly interpolated to derive the discount curve in Figure 1. 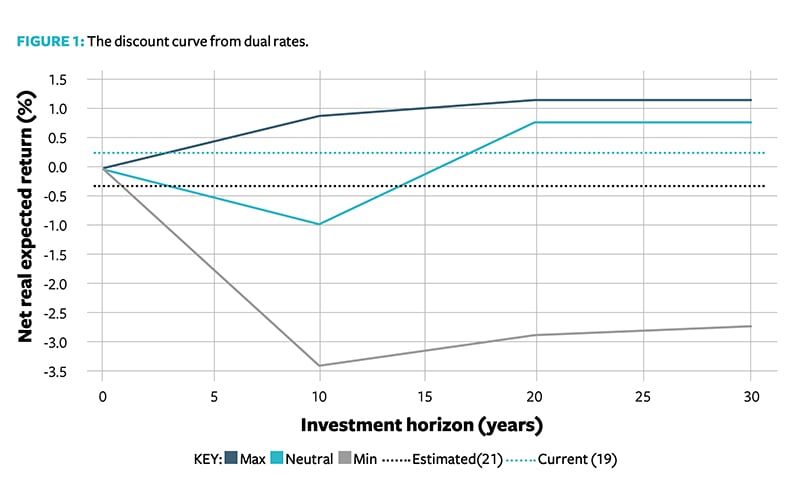 from each efficient frontier, alongside GAD’s advised 2019 rate and our estimate of what that rate would be in 2021. In our opinion, ‘neutral’ is the most relevant construction because it assumes that the claimant prefers using the investment portfolio to neither reduce nor increase risk – in other words, the joint asset and liability position arising from the efficient frontier is equal to that of the liability stream, individually considered.

The neutral curve is below the estimated rate for investment horizons of shorter than 15 years, and above it for longer ones. The Ogden rate therefore appears too high for claimants with shorter investment horizons (thus undercompensating claimants), and too low for those with longer horizons (thus overcompensating). This is where a dual rate may be helpful, and GAD has indicated that it will give further thought to a dual-rate model by the time of the next review. A dual-rate framework could also reduce the number of claimants who would be undercompensated at any given rate, reducing the need for the government’s prudence margin. 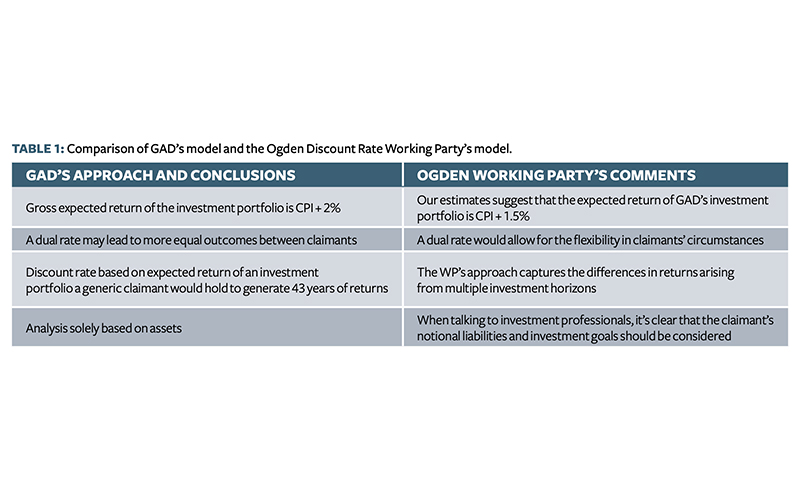 How are insurers thinking about the impact on their reserves?

We surveyed chief actuaries and heads of reserving about their approach to reserving for classes of business impacted by the Ogden rate. Our key findings include:

Although the Ogden rate change may not occur until 2024, insurers are looking at its potential impact. The work we have carried out shows there is a lot of thinking that can be done to refine the next rate.

Francisco Sebastian is an investment actuary at Wellington Management

Andrew Corner is a senior manager at PwC

This article appeared in our December 2021 issue of The Actuary.
Click here to view this issue
Filed in:
General Features
Topics:
Investment
Risk & ERM
General Insurance