Game over for game theory and vaccinations

Game theory is no basis for decision-making when it comes to normative issues such as vaccination, says Ronald Meester 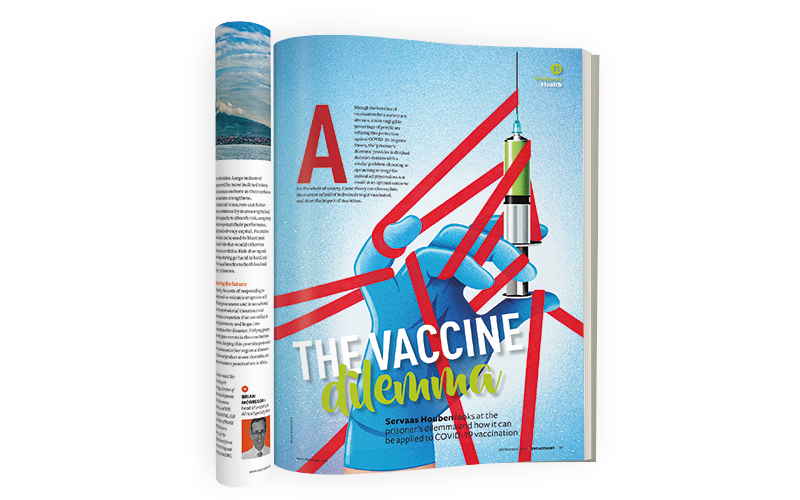 Servaas Houben published an article in the September issue of The Actuary (bit.ly/Act_VaxDilem) in which he applied game theory to the COVID-19 problem.

His conclusion was as follows: “This shows that current policies for providing positive incentives (such as easier overseas travel and access to certain events) for vaccinated individuals will result in a better outcome for society as a whole.” His conclusion was based on an analogue of the classical prisoner’s dilemma (Table 1) in which, say, (0, 10) means that Prisoner A gets 0 years in prison, and Prisoner B gets 10 years.

For each prisoner it is best to confess because, regardless of the decision of the other prisoner, this leads to fewer years in prison. However, while individually this is correct, it leads to a situation in which both prisoners get nine years of punishment, while (1, 1) would be optimal. This shows that individual optimality may lead to global sub-optimality.

Houben presents the COVID-19 vaccination situation as a ‘game’ between an individual and society (Table 2).

The numbers are negative, to stress that they are seen as punishments. Independent of society’s decision, the individual is better off not taking the vaccine. Of course, Houben constructed it this way by classifying an individual vaccination as a punishment, due to its possible side effects. Society’s choice is independent of the individual, so this game ends up in (0, -1).

Since Houben believes vaccination is a good thing, he claims that if vaccinations are rewarded by +2 on an individual basis, the individual will take the vaccine and we will end up in a ‘better’ situation. This can be accomplished, he says, by rewarding vaccination with “easier travelling” and “access to events”. This is the basis for the claim I quoted above.

Can game theory be used for purposes such as this? The answer is no. First of all, in the original prisoner’s dilemma, one defines ‘better’ in utilitarian sense: (1, 1) is better than (0, 10) since 1 + 1 is smaller than 0 + 10. However, in the (0, 10) outcome, Prisoner A is better off than they would be in the (1, 1) situation. In utilitarian ethics, torture is allowed if the pleasure of the executioner and/or others is greater than the victim’s pain. I am not sure whether we should embrace such a system – and this is probably enough to dismiss a game-theoretical approach to normative questions. 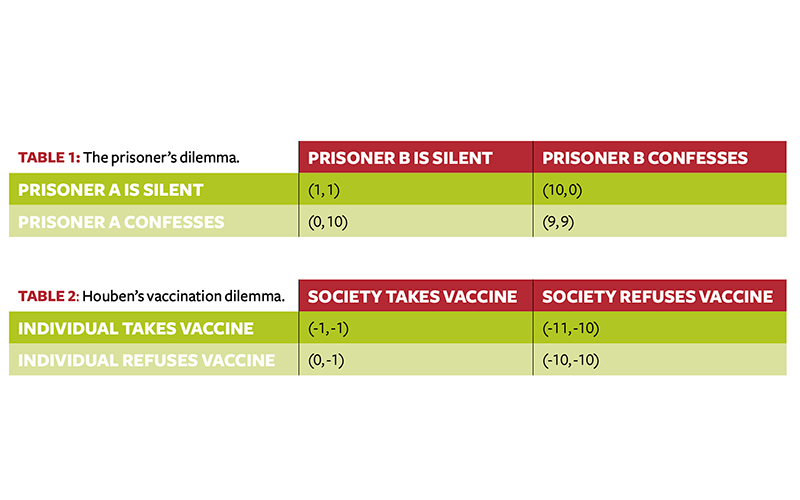 Secondly, to apply game theory to normative questions, we need to define from the outset what is considered ‘good’ and ‘bad’. Houben had decided in advance what he considered good and bad, hence the numbers in Table 2. To then claim that game theory can help to reach a better outcome for society does not make any sense. The only thing one can conclude is that the game can help reach a state which the author of the table deems better.

In short, a game-theoretical approach is not helpful for normative issues such as the COVID-19 vaccination dilemma. The only thing it provides is an unwarranted scientific touch to a personal opinion.

I have no objection against a personal opinion, but I do object against the suggestion that game theory, let alone science, supports it.

Ronald Meester is a professor of probability theory

This article appeared in our December 2021 issue of The Actuary.
Click here to view this issue
Filed in:
General Features
Topics:
Risk & ERM