Fall of the wild? 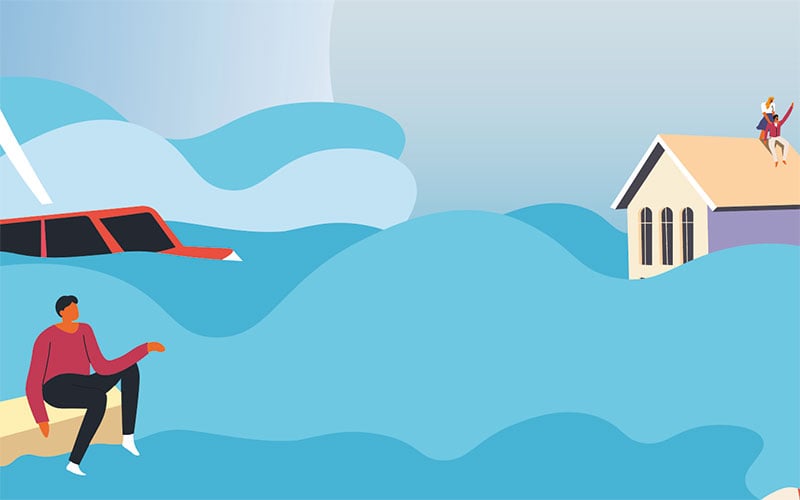 Extreme weather is becoming more common in terms of both frequency and severity. From May to July 2021, Swiss Re noted 19 major peril events around the world,of which 13 were floods. We’ve seen extreme flooding in Zhengzhou, China, where more than 30 people lost their lives and 300,000 were displaced – described as a ‘once in a millennium’ event. New Zealand was inundated with heavy rain for two months, leading to severe flooding and the evacuation of thousands of people. And torrential storms hit Germany, Belgium and the Netherlands in July; while July is typically the wettest month in the region, this rainfall was two to three times the normal monthly level, and most of it fell in 48-72 hours. The flooding has been called Germany’s worst natural disaster in more than half a century, and has claimed over 180 lives.

Life and property risk is also linked to poor urban development and land use planning. We live, build and work in the areas that are most at risk: in cities and towns on the coast, near rivers and forests, or in the wildland-urban interface. Satellite data from the European Commission’s Global Human Settlement Layer shows that the area of built-up land in the US increased by about 50% between 1990 and 2015, and by around 60% in the Midwest and South in particular – two areas of the US that are particularly prone to hail and tornadoes.

Climate change and biodiversity are too often treated separately, but they are inherently linked. As stated in the Royal Society paper ‘Understanding the value and limits of nature-based solutions to climate change and other global challenges’ (bit.ly/RoySoc_NatureBased): “the failure to stabilise and adapt to climate change […] or protect biodiversity […] has been exacerbated by the fact that these issues are being treated separately when in fact they are deeply interwoven and share many of the same drivers.”

Why is this important for insurance?

Figure 1 shows which insurance lines of business are impacted by the loss of natural assets and ecosystem services, both directly and indirectly. Almost no line of business is spared, but property risk is one of the most directly impacted. For example, coastal and riverine forests and mangroves provide essential erosion protection, with tree roots building a natural defence against waves and providing water storage in cases of heavy rainfall. Globally, the flood protection benefits provided by mangroves exceed US$65bn per year. In areas where such forests have disappeared, landslides are more frequent and storm surges move further inland, increasing property losses.

On the life and health front, respiratory diseases are a key driver of claims globally, with costs continuing to rise. Forests and vegetation purify the air: where they exist, the burden of respiratory diseases is lower than it is in areas without trees. Increasing green space in urban areas also reduces the impacts of extreme heat and the related costs of hospitalisation, and an increasing number of people gravitate to outdoor spaces to help manage their mental health.

Water scarcity causes business interruption in shipping, drought causes power interruption and adverse consequences for agriculture, and soil degradation is putting our food systems at risk. The list goes on. All of this shows that the twin impacts of climate change and environmental degradation pose a formidable challenge to the insurance industry. The question is: now what?

It has long been an ecological tenet that biodiversity begets stability, which in turn begets resilience. This is profoundly relevant to the insurance industry in terms of both impact to the risks we underwrite – as nature minimises losses – and our role in enabling solutions that increase environmental and societal resilience.

Ecosystems act as a buffer. Their protection and restoration is crucial if we are to reduce the impacts of extreme weather and adapt to future weather and climate events. Globally, an annual investment of US$5-10bn into coastal wetland protection could lower annual flood damage by US$52bn, according to the Science paper ‘How to pay for saving biodiversity’ (bit.ly/Science_PayforBio)

Inland flooding can also be prevented and mitigated. One example from Canada shows that reforestation in the headwaters of a river basin significantly reduced peak stream flows compared to an adjacent deforested basin, thus offering greater protection against flooding. A US example, meanwhile, showed that natural regeneration following forest clearcutting reduced flood risk in lowland areas, reducing stream flows during periods of high precipitation by greater than 104 l ha−1 d−1.

Nature provides us with tools, such as mangroves, wetlands and saltmarshes, coral reefs and riparian buffers, that mitigate the impacts of severe water flow and flooding. Rivers also have their own systems of flood management, organically expanding and contracting on flood plains, which are being confined by urbanisation.

Measures taken to secure the benefits of biodiversity and ecosystems can be summed up as nature-based solutions (NBS). They are defined by the International Union for Conservation of Nature as “actions to protect, sustainably manage and restore natural or modified ecosystems that address societal challenges effectively and adaptively, simultaneously providing human well-being and biodiversity benefits”. Examples in which insurance plays a key role in NBS or other solutions targeted toward ecosystem integrity include:

Slowing climate change and the role of intact ecosystems

To slow the impacts of climate change we must not only drastically reduce greenhouse gases such as carbon dioxide, but also remove them from the atmosphere via sequestration. Carbon sequestration can be achieved through the restoration of mangroves, sea grass meadows, coral reefs, wetlands, riparian vegetation and forests, as well as regenerative farming practices.

Intact ecosystems can not only serve to absorb extreme weather events but also mitigate climate change through storing carbon. According to the Global Mangrove Alliance’s 2021 report The State of the World’s Mangroves, for example: “Mangroves are powerhouses of climate mitigation. [They] sequester carbon at four times the rate of terrestrial forests and can convert carbon dioxide to organic carbon at higher rates than almost any other habitat on Earth. Healthy mangrove forests are able to store the equivalent of 21 gigatons of carbon; restoring degraded mangroves could lead to the sequestration of an additional 1.3 gigatons. This sum is equal to about three years of carbon emissions for a country like Australia.” An investment in mangroves and other ecosystems thus has a health return. Underwriting and transferring the risks of ecosystem restoration and protection (as per the examples given) therefore also has the double benefit of ensuring carbon sequestration.

There is much at stake. Urgent and immediate action is needed from the insurance industry, which has an interest in mitigating future losses and can play a critical role as an enabler. Actuaries must help to rationalise the case for change by reducing gaps in data and standardising approaches to valuing nature. Indeed, this year’s Joint Forum on Actuarial Regulation Risk Perspective identified climate-related risk (including biodiversity) as a key risk hotspot for high-quality actuarial work.

Actuaries’ skill and objectivity will help the insurance industry better manage the risks of climate change and biodiversity degradation, as well as find new solutions and approaches. Data and evidence-based design is needed to maximise synergies and minimise trade-offs in addressing the need and opportunities for climate prevention, mitigation, adaptation through nature-based solutions, biodiversity and ecosystem protection goals. It is also time to challenge the status quo of valuation and include nature impacts in business decision-making.

We all need to play to our strengths if we are to shift decision-making towards a nature-positive and adaptive future in underwriting and investing. Intact ecosystems minimise insurance losses, protect against climate impacts, keep our global climate system in balance by limiting global temperature rises, and provide economic and health benefits. There is a cost to adaptation and mitigation – but the cost of inaction is greater.

Samantha Dunn is head of natural catastrophe protection gap and co-lead, reinsurance sustainability at Swiss Re

This article appeared in our October 2021 issue of The Actuary.
Click here to view this issue
Filed in
General Features
Topics
Data Science
Environment
General Insurance