Coughing up on carbon taxation 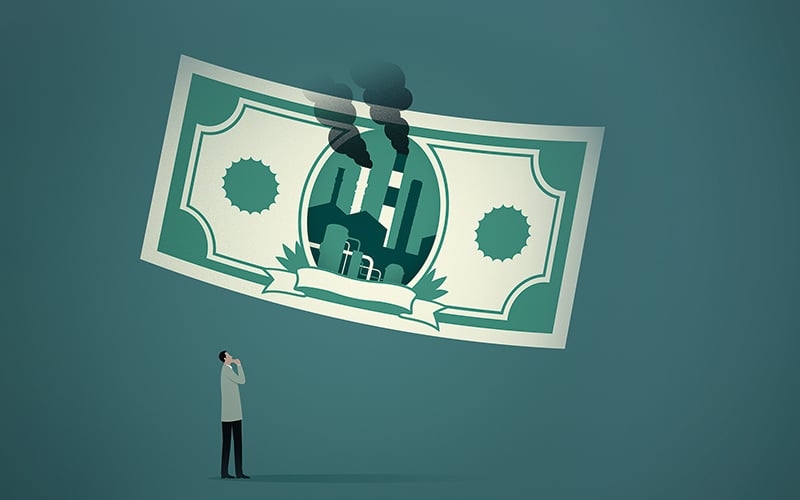 Of all the significant challenges facing the world, the one that poses the greatest existential risk to humanity is undoubtedly climate change. It is no longer controversial to say that temperature increases of more than a few degrees above a global average of 1.5°C will be lethal to humans. It is, however, not sufficient for us to focus solely on reducing future carbon emissions: action must also be taken now to deal with the heating that has already occurred.

Global warming has become such a major issue now because insufficient steps were taken in previous decades to prevent the outcomes we are currently observing. Reconstructing energy supply and production to achieve not just net-zero carbon emissions but also a fall in absolute emissions will mean significant changes in the coming decades.

What does economics tell us about how this should be done? The answer is, rather a lot.

First, the polluters must be taxed. We know who they are, and we have known that we must tax them since the 1970s, when David Wilson, a professor of mechanical engineering at the Massachusetts Institute of Technology, devised such a market-based mechanism. The release of carbon gases is what we call a negative externality – it affects the environment and everyone in it, but those creating it have no incentive to stop because it is not part of their internal costs. To make it a part of their cost structure, a regime of taxing the polluters needs to be put in place by regulators with government authority.

Analysis of how to achieve this must start with an honest, factually driven discussion about who is responsible for global warming. Moreover, there needs to be recognition that there is great disparity in the relative wealth of nations, so reducing carbon emissions cannot be equally shared between countries.

It is also the case that not every country is equally responsible for the current situation – more than 50% of the cumulative CO2 in the atmosphere is from Europe and the US, for example. A system ought to be put in place so that those who have historically contributed the most to where we are today face a more significant financial burden, while those who are currently high emitters but are not primarily responsible for the increase in global temperatures will carry less of the burden.

In short, some countries – and some of their companies – will be taxed and treated differently, based on the amounts of greenhouse gases they have released to date. This system can be internationally effective, but only if the governments responsible for overseeing those companies have the political will to ensure that any action taken is enforced everywhere.

However, there are some subtle and not-so-subtle fairness issues around carbon taxes and their potential effects on people of different income levels, as well as the economics of firms’ production locations. These will have implications for economic growth and the disparity of living standards between countries.

Carbon taxes will mean price rises, and those price rises will hit those who consume more carbon-intensive products the hardest. To that extent, a tax could have a disproportionate impact on the incomes of those who are poorest, if they have comparable carbon footprints to wealthier households. A mitigating strategy here could be for governments to subsidise those who are on lower incomes to move to less carbon-intensive lifestyles. Income tax cuts and/or rebates would be practical ways to implement such a policy. Avoiding fuel poverty for the poorest must be a political priority, or there is a risk of undermining any carbon pricing strategy.

There is also the risk that a high carbon tax in one country could mean that production is simply moved to a country where the tax is lower, thus negating the tax’s intended impact in terms of emissions reduction. Policymakers would need to be mindful of such unintended consequences and find ways to resolve them.

None of this is rocket science or, indeed, new. It is widely understood, but hard to put into action because of the real challenges of asking people to pay more for what they regard as necessities, rather than luxuries – never mind the situation for those who are already feeling left behind.

Not acting, however, is increasingly no longer an option, as signs of the effects of excessive carbon emissions proliferate. Perhaps the only good news is that this may open up political room for action.

Trevor Williams is an independent economist and a professor of economics at St Mary’s University, London

This article appeared in our September 2021 issue of The Actuary.
Click here to view this issue
Filed in
General Features
Also filed in
Opinion
Topics
Investment
Risk & ERM
Environment