James Dyke: Almost out of time 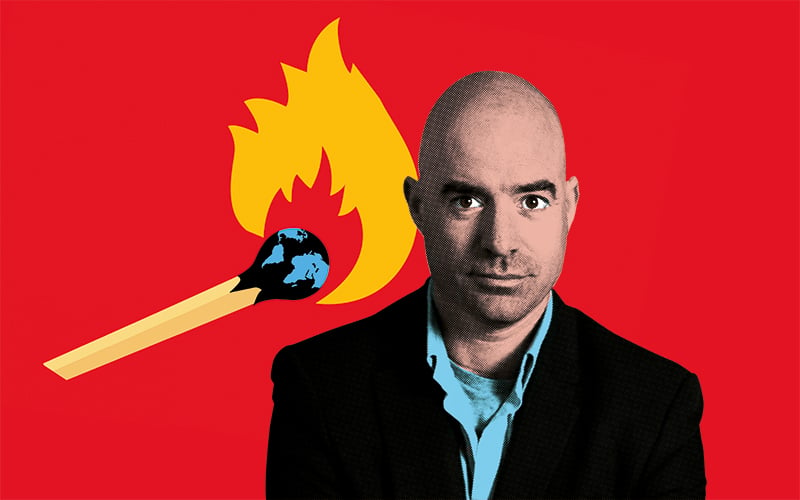 James Dyke is a senior lecturer in global systems at the University of Exeter and assistant director of the Global Systems Institute, as well as a member of the European Geosciences Union and the editorial board of the journal Earth System Dynamics. However, while he is first and foremost an academic, he is not content to solely perform research and advance knowledge of sustainability – he strives to ensure that his work, and the work of his fellow scientists, is acted on.

Dyke sees a greater role for academia in the public realm in terms of both influencing climate policy and contributing to realistic solutions, and leads by example. He contributed to the drafting of the 2020 Climate and Ecological Emergency Bill and takes an active approach to influencing public opinion and policy through his writing and presentations: he is an environmental columnist for The i, regularly writes for The Conversation and recently launched his first book, Fire, Storm and Flood: The Violence of Climate Change, a photographic record of the effects of climate change from the earliest extinction events to the present. He also contributes to a range of television, radio and online media, and was a presenter, writer and co-producer of climate change documentary The Race is On.

Dyke’s interest in sustainability was sparked by his first postdoctoral research project at the Max Planck Institute for Biogeochemistry in Germany, which focused on how the emergence of life can affect planetary evolution. Following this work, Dyke “got more interested in how this particular species [humans] is affecting this particular planet: anthropogenic climate change and biodiversity loss and other environmental issues.” Since then, he has concentrated his academic efforts within the broad area of sustainability science.

In the lead up to the 2021 United Nations Climate Change Conference (COP26), momentum has been building around climate action, particularly the quest to reach net-zero emissions before 2050. A growing number of countries and non-state actors have made net-zero pledges, encouraged by public support and campaigns such as the UN’s Race to Zero.

These developments are enough to give cause for optimism. However, a degree of wariness is required given nations’ poor global track record when it comes to converting pledges into action. According to the International Energy Agency, CO2 emissions from energy and industry have increased by 60% since the United Nations Framework Convention on Climate Change was signed in 1992, despite the numerous promises, pledges and conferences since.

Dyke recently teamed up with two climate academics – Robert Watson of the University of East Anglia in the UK and Wolfgang Knorr of Lund University in Sweden – to write an article for The Conversation warning of the dangers around the assumptions underlying net-zero policies (bit.ly/Conv_NetZero). “The main spine of the article is a potted history of decades of delay on climate action,” Dyke says.

He attributes the delay to policymakers pursuing solutions that are politically feasible, but not necessarily credible. “In the 1990s, it was energy switching from coal to gas, then it was ‘clean coal’ – the idea of using carbon capture to take out the carbon emissions from coal. Then it was carbon offsetting by increasing natural sinks.”

Dyke is concerned that the net-zero concept is a further manifestation of unrealistic climate policy and will waste time that we do not have. “As we’ve left things so late, the only chance of stabilising warming to well below 2°C is not just by slowing emissions, but by actively removing a significant amount.”

The extent to which we are putting our hopes in future carbon removal technologies is dangerous when so much is at stake, he argues. “These technologies are largely fictional, and they were proposed as a way of essentially extending carbon budgets, allowing us to continue to burn fossil fuels.” He stresses that he is not against carbon removal technologies, but believes they should be kept in reserve instead of relied upon as a core policy element.

The role of the economy and financial markets

Part of the reason we are now so reliant on carbon removal technologies, Dyke argues, is that the pursuit of endless economic growth has been a drag on effective mitigation policies. “We’re still locked into an optimisation approach where the assumption is we can’t decarbonise too fast because we don’t want to harm economic growth.”

He is not alone in questioning the sustainability of infinite economic growth. The landmark 1972 report The Limits to Growth found that under a business-as-usual scenario, resource constraints would become evident before the end of the 21st century, leading to uncontrollable economic decline. The report has inspired significant debate and research since it was published; for example, Kate Raworth’s book Doughnut Economics argues for a shift to an economic model that balances essential human needs within planetary boundaries.

Asked whether we need a new economic system, Dyke is blunt: “We don’t have time.” He does, however, think that policymakers must overcome their myopic focus on economic growth and shift towards more distributive and sustainable policies.

Dyke is more positive when it comes to the role of finance in climate solutions. “Financial institutions are going to be crucial, because they make a whole series of decisions about what they are and aren’t going to fund. They will have a really important role to play in keeping fossil fuels in the ground. For example, they can say ‘no, you’re not going to have any more money to drill in the Arctic, we have enough hydrocarbons’.”

He does, however, caution that there is a limit to the power of markets, and believes that strong and effective regulations and policies are also needed.

Another contributing factor to the delay in climate action is climate scientists’ general reluctance to speak out against unrealistic policy assumptions. “To some extent, academia sees itself as a service provider to society, so if society determines that we need to limit warming but with set parameters on the rate of decarbonisation, they will try to solve that equation and come back and say ‘well you’d have to remove lots of CO2 from the atmosphere’.”

Dyke believes that many climate scientists have avoided questioning the parameters of the equation or publicly criticising policy assumptions, as this would be seen as crossing the line that separates academia and activism. When asked whether more scientists should cross that line, his response is an emphatic ‘yes’. He believes scientists and other professionals with vital pieces of information have a duty to make their voice heard and tell it like it is. “When people do raise their voice, they can have a really important route to making an impact.”

Dyke understands that most scientists wish to remain objective and feel uncomfortable commenting on what they perceive as political or social policies. Indeed, many actuaries may hold a similar view. However, he thinks there is a point at which you need to step back and ask yourself, ‘what positive role am I going to play?’

The COVID-19 pandemic showed the positive influence that experts can have on policy, such as the Scientific Advisory Group for Emergencies and, closer to home , the COVID-19 Actuaries Response Group. These examples should give experts the confidence to lend their skills and their voice to the next global challenge – climate change.

Dyke encourages actuaries to get involved in environmental issues and be more vocal. “It’s about working in your organisation, discussing with your peers, pressuring your management, pressuring the board to undertake those institutional changes, joining up with other people, joining up with our activists, and adding your voice
to what’s going to have to be an international clamour for action.”

This article appeared in our September 2021 issue of The Actuary.
Click here to view this issue
Filed in:
General Features
Also filed in:
Interviews
Topics:
Investment
Risk & ERM
Environment