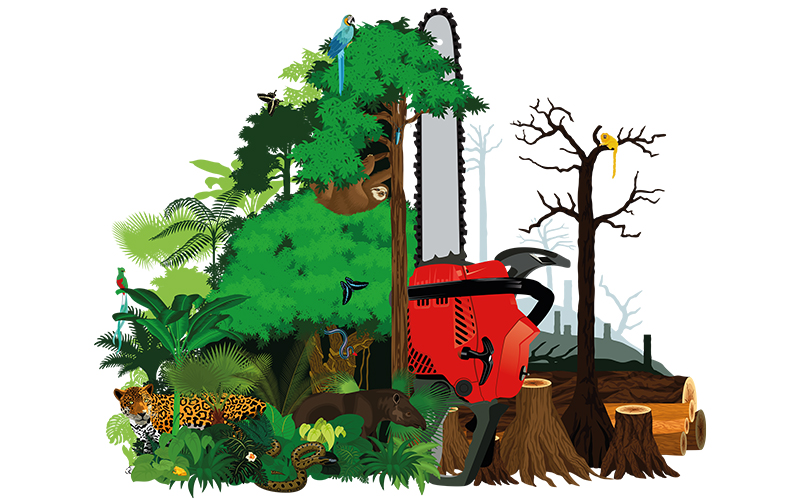 It may not feel like it, but we are living through a remarkably stable period in our planet’s history. The Holocene epoch, which began around 11,700 years ago, has provided the ‘Goldilocks’ conditions that facilitated the development of agriculture and enabled humanity to thrive. Our greatest achievements and written history have all fallen in this era.

But our success has come at a price. The Industrial Revolution enabled us to unleash the condensed energy within fossil fuels, which turbocharged our growth, but pushed consumption beyond planetary boundaries. We have racked up a planetary debt. Left unpaid, it threatens to drive the environment into a new erratic and less hospitable state.

The focus so far has been on the climate crisis. However, we are also facing another environmental problem – rapid biodiversity loss. Biodiversity and climate are interdependent, but the two issues are distinct. Significant biodiversity loss has already occurred, but the worst effects of climate change are yet to be felt.

While climate change will exacerbate biodiversity loss, reaching net-zero emissions in isolation will not necessarily solve the biodiversity crisis. Indeed, some climate-driven initiatives, such as biofuels and monoculture tree plantations, could actually harm biodiversity. Solutions that address both crises must be prioritised.

The UN Intergovernmental Science-Policy Platform on Biodiversity and Ecosystem Services’ 2019 global assessment report on biodiversity found that, as a result of human activities, nature is declining at a rate unprecedented in human history. Some scientists believe we are at the start of a sixth mass extinction event, with a million species at risk of vanishing. If that were to happen, it would be the first extinction event caused by a single species – one that had both the knowledge and the power to stop it.

The main drivers of terrestrial biodiversity loss during the past 50 years are land use changes – particularly agricultural expansion and intensification  – followed by direct exploitation, such as logging and poaching. The same drivers apply to marine ecosystems, but in the reverse order – overfishing has had the largest impact on marine life.

Nature can recover if given the chance. Dedicating more space to nature and protecting it from exploitation would go a long way to reversing biodiversity loss. That would require a shift away from meat-heavy diets, a move to a circular economy, expansion of nature reserves, and perhaps even a new definition of economic success.

The financial consequences of biodiversity loss

Biodiversity underpins healthy ecosystems, which provide a range of services such as regulation of air and water, pollination of crops, defence against natural disasters, maintenance of soil fertility, and the provision of food, materials and medicines. In 1997, a study by ecological economist Robert Costanza estimated that ecosystem services provided US$33trn of benefits per year; an update in 2014 placed the value at US$125trn per year. While ecosystem services are not included in GDP – trees are only valued when felled – these services support measured areas of the economy. The collapse of ecosystems would thus have material financial consequences.

A report by the Swiss Re Institute found that 55% of global GDP is moderately or highly dependent on biodiversity and ecosystem services. The World Economic Forum’s (WEF) 2020 global risk report found that biodiversity loss is a top five risk in terms of both likelihood and impact, while a 2020 study by De Nederlandsche Bank found that €510bn of investments by Dutch financial institutions (36% of the portfolio examined) are highly or very highly dependent on ecosystem services.

Financial institutions are exposed to biodiversity risks through their investments and insurance liabilities.

Actuaries have a role to play in helping companies to assess and navigate these risks. They are also well placed to identify opportunities and drive positive change.

The IFoA is making progress in this respect, with biodiversity cited as a key strategic theme by the chair of the Sustainability Board. In addition, the Biodiversity Working Party recently released an initial position paper, The Importance of Biodiversity Risks (bit.ly/3jbCs9A), which explores the implications for actuarial work. However, biodiversity is a nascent area relative to climate change.

Further work is required in the following three areas: risk assessment and management, improved disclosures, and investment and product opportunities.

“Actuaries have a role to play in helping companies to assess and navigate biodiversity risks, as well as in identifying opportunities and driving positive change”

The concept of the physical and transition risks of climate change can be expanded to assess the risks caused by biodiversity loss. Scenario modelling will also be a powerful tool to help understand exposures and manage risks.

Physical risks arise from the impact of biodiversity loss on asset holdings and insurance liabilities. WEF’s Nature Risk Rising report (bit.ly/3cAtm55) found that the construction, agriculture, and food and beverages sectors have the largest exposure to nature loss, with most other sectors exposed to some degree. Investments and non-life insurance products covering these sectors (for example crop insurance) are more exposed to physical risks. Life insurance liabilities and pricing may also be affected by adverse impacts on human health and mortality rates.

Transition risks arise from the impact of a shift to sustainable practices in order to meet biodiversity objectives. Asset holdings in companies with unsustainable business models (such as fast fashion) and those linked to harmful practices (such as deforestation and pollution) are most exposed to transition risks. The transition may also increase production costs in some sectors and curtail the expansion of others (such as mining).

Companies will increasingly be expected to disclose information on biodiversity risk. The Task Force on Nature-related Financial Disclosures aims to develop a global reporting framework similar to that of the Task Force on Climate-related Financial Disclosures, with early testing planned for 2022. Companies will also be expected to set biodiversity targets. The Science Based Targets Network is currently developing a framework for setting nature-oriented targets, which it expects to roll out in 2022.

In the interim, companies are encouraged to voluntarily report on biodiversity impacts and commitments. Actuaries can help shape these disclosures and develop meaningful forward-looking metrics.

Financial institutions can have a pivotal role in reversing biodiversity loss by investing in sustainable solutions and influencing companies to abandon unsustainable practices. They are already showing a willingness to tackle the issue. Last year, 37 companies signed the Finance for Biodiversity pledge, committing to protect and restore biodiversity through their activities and investments. However, stronger global leadership and clearer direction are needed.

The UN Biodiversity Conference (COP15) in May will be an important milestone. The aim of the conference is to agree on a new framework and set of targets. There is hope that the biodiversity equivalent of the Paris Agreement on climate change will be reached. Such an agreement would provide a clear global objective for investors to align with, unlocking the power of market forces.

Growing public awareness of biodiversity loss would be expected to further increase demand for environmental, social and governance (ESG) funds, but will also increase expectations and scrutiny. Customers will expect improved due diligence on biodiversity risks and will demand divestment from particularly egregious companies. The non-profit Make My Money Matter, for example, ran a slick campaign in December calling for pension providers to commit to net-zero and deforestation-free portfolios.

Aside from new ESG funds, there will also be opportunities for financial institutions to invest directly in sustainable projects, develop new products and support market-based biodiversity pricing schemes. For example, HSBC was the first private investor in Reef Credits, which are tradable units that value work undertaken to prevent harmful agricultural run-off from reaching the Great Barrier Reef.

These initiatives will help address biodiversity loss, although care must be taken to avoid the commoditisation of nature. After all, value is an anthropocentric concept – nature is priceless.

This article appeared in our March 2021 issue of The Actuary.
Click here to view this issue
Filed in
General Features
Topics
Investment
Environment
Careers