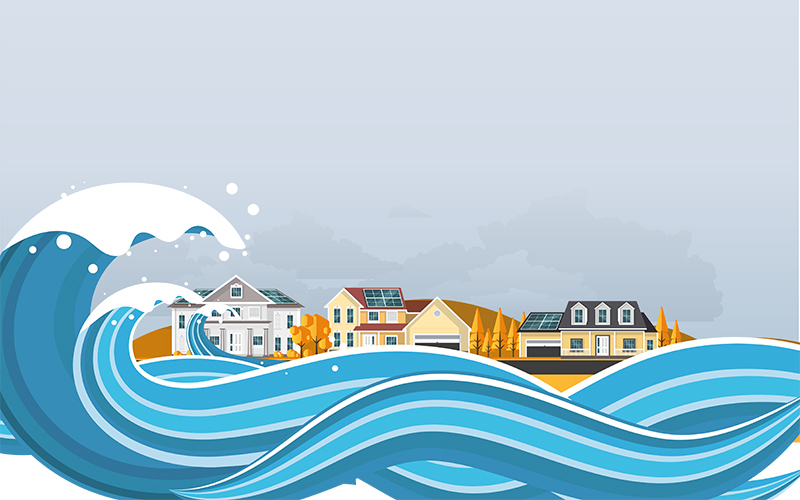 During the past five years, we have seen a mainstreaming of climate risk within financial institutions. This arguably began in September 2015, with a speech by the then governor of the Bank of England Mark Carney that discussed the implications and risks arising from climate change. This was followed by the landmark Paris Agreement in November 2015, which set out the aspiration and need for the world to limit global warming to well below 2°C. Since then, the Bank of England, through the Prudential Regulation Authority, has pushed the climate agenda forward through consultations and new requirements for both UK insurers and banks.

When thinking about climate risk, we can separate it into three main buckets:

How can we assess the implications of climate risks for insurers’ asset portfolios and liabilities? 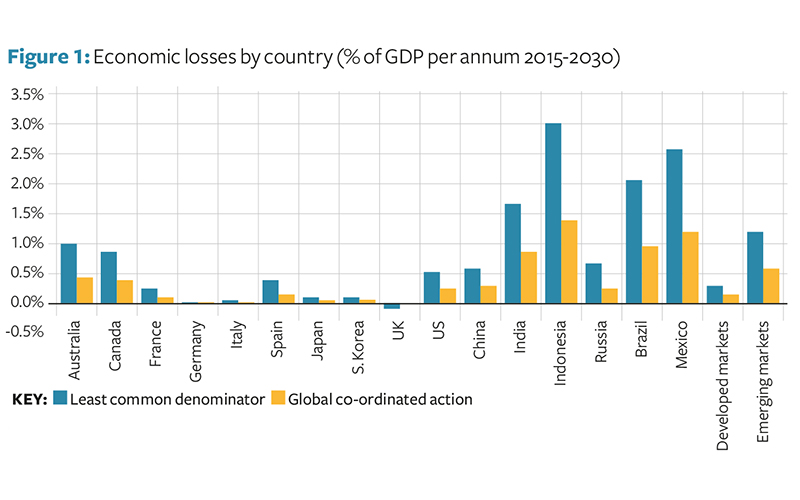 There are different ways to analyse climate risks, one being a top-down assessment. Top-down scenario analysis can be used to understand how different climate-related scenarios might impact investment portfolios. This can be achieved by using a meta-analysis approach that seeks to use the most credible research on the key factors that would be expected to drive economic losses associated with climate change. A cost-benefit framework can then be used to determine the impact of each climate-related scenario on current and future economic costs.

First, identify and focus on the most material impacts to quantify the economic costs associated with each climate scenario. Next, translate these economic costs to impacts on asset class returns using appropriate models. Climate-related scenarios are expected to impact current and future economic costs through three factors:

Beginning with the first factor, one can analyse each country’s vulnerability to climate events. For each scenario under consideration, economic losses can be estimated for each country. Figure 1 shows estimated economic losses for a selection of countries under two possible climate scenarios: ‘business as usual’, with global warming of between 3°C and 4°C, and ‘global co-ordinated action’, where the Paris Agreement objective is achieved. We can clearly see that developed countries are expected to experience relatively low economic losses, while developing countries such as India, Indonesia and Mexico are predicted to see larger economic losses, primarily due to their geographical location and the structure of their economies.

Using this country-level analysis, we can estimate the per annum impact on different asset classes, as well as on a total portfolio. We can frame these impacts as a drag on annual growth or as instantaneous shocks.

Another method for analysing climate risk is through a bottom-up sector and industry analysis under different scenarios. Figure 2 shows a bottom-up analysis of estimated climate-related impacts on different global equity sectors. This quantitative assessment is valuable in understanding how equities can be impacted by both transitional risk and physical risk. The estimates shown in the table represent the percentage change in net present value (NPV) based on projected losses during the next 20 years. Darker cells show larger impacts, lighter cells more moderate impacts. The graphic highlights which sectors within global equities are over or underexposed to transition risk.

Using estimated NPV impacts per sector for a given portfolio, one can determine which funds would have higher climate risk exposure compared to, say, the MSCI index, a typical global equity benchmark. The difference increases under stronger mitigation policies and outcomes. This analysis can be expanded to consider specific industries within sectors. For example, one can consider automobiles and components within the consumer discretionary sector and analyse the impact of electric and autonomous vehicles. 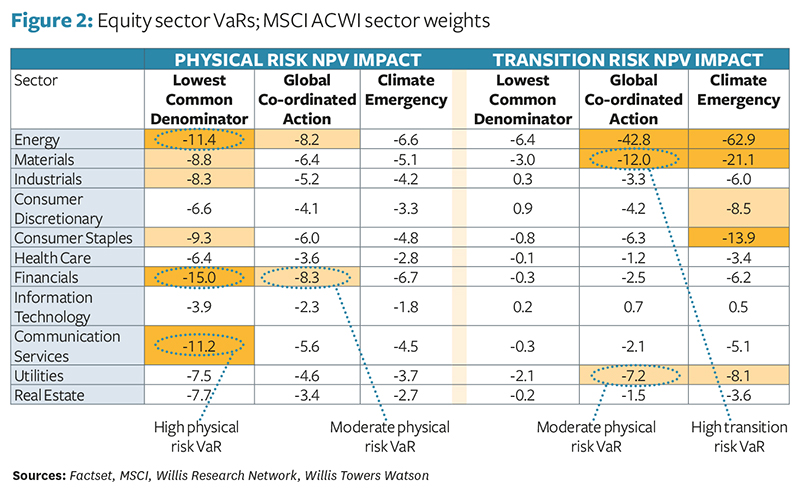 Through this bottom-up analysis of transition risk, it is also possible to analyse which companies have the highest equity value at risk (VaR) in a global co-ordinated action scenario. Key takeaways are:

To model the impact on mortality, a driver-based model (which is a standard approach for modelling mortality in the insurance industry) can be calibrated to a range of climate variables and broad cause-of-death groups. The model can then be used along with appropriate climate scenarios to generate a potential range of long-term effects on mortality improvements. The modelling could be simplified by focusing on the mortality trend at a country level, rather than attempting to capture regional differences.

First, research can be conducted to assess and select drivers that have a material impact on mortality outcomes and a convincing link to changes in climate. Second, interactions with other risk drivers and cause-specific mortality can be calibrated using academic papers, data and actuarial expert judgment.

The key output of the model is the impact on life expectancy. It is important, however, to recognise the mortality model’s limitations and potential influence of other factors. For example, a GDP and tax revenue reduction is likely to have an impact on healthcare funding and longevity.