Temperature extremes and health: The heat is on 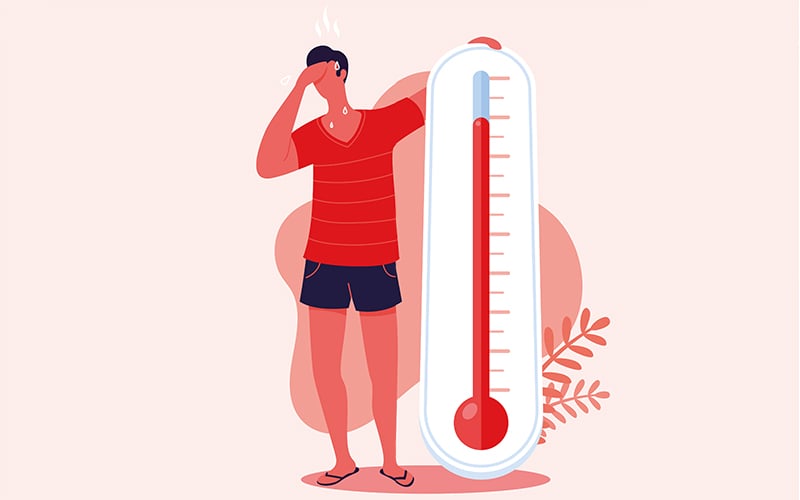 Climate change is a reality that now affects every region of the world,” said Michelle Bachelet, UN High Commissioner for Human Rights, in a speech at the UN in 2019. “The human implications of currently projected levels of global heating are catastrophic. Storms are rising and tides could submerge entire island nations and coastal cities. Fires rage through our forests, and the ice is melting. We are burning up our future – literally.”

As Bachelet’s words illustrate, climate change presents one of the gravest risks to global economies and health. In the insurance context, catastrophic weather events can simultaneously trigger large losses across different lines of insurance business. Effective management of climate-associated risk is therefore of fundamental importance for (re)insurance companies’ solvency considerations. While the impact of extreme climate risk on general insurance has been a hot topic in recent decades, relatively little attention has been given to the adverse impact of climate change on life insurance.

There is no cause of death referring to ‘climate change’, but climate change can trigger excess deaths via different causes, to varying degrees. In other words, ‘shocks’ in climate events may trigger ‘shocks’ in mortality experience.

According to the WHO, climate change is expected to cause approximately 250,000 additional deaths per year between 2030 and 2050. There are three main channels through which climate changes can impact health and mortality:

Our recent study, ‘An EVT Approach to Modeling Joint Extremes in Climate and Mortality’, focuses on the second of these channels, jointly modelling extreme temperatures and death counts via a cutting-edge extreme value theory (EVT) approach.

An introduction to EVT 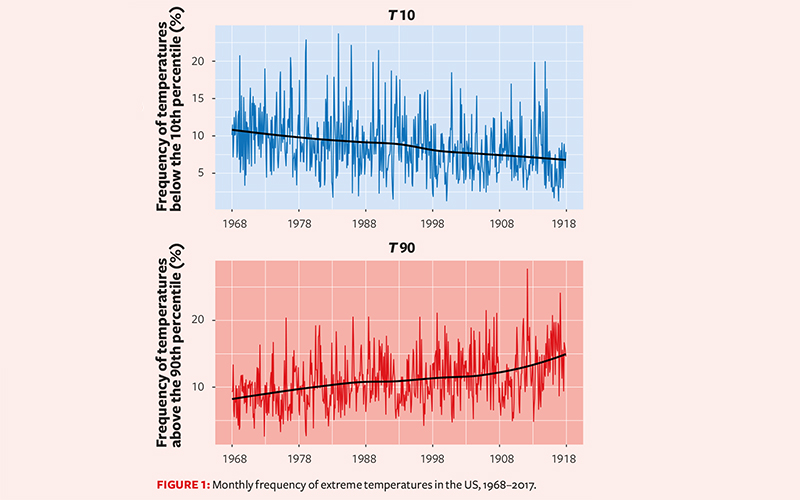 We adopt the bivariate POT approach. This allows us to investigate how likely it is to observe more than y% more deaths in that month if the monthly frequency of extreme hot/cold temperature is above x%. We now illustrate some basic theory in bivariate EVT.

Consider a two-dimensional random vector X  with distribution on R2  and denote by Mn the component-wise maximum of a sample of size n from F .

Since the standard POT theory is built on the assumption of independent and identically distributed random variables, we need to remove any trend, seasonality and heteroscedasticity from the data first. Defining ‘extremes’ as unexpectedly large values in temperature and mortality, we focus on short-term dynamics instead of the long-term relationship between climate change and mortality experience. The US and Canada’s actuarial professions have recently compiled new datasets, the Actuaries Climate Index (ACI), in order to measure and monitor climate trends, taking into account the frequency of extreme weather and the extent of sea level change. Based on the ACI, it is found that climate extremes have already been much more frequent in the past two decades than they have been historically, in both the US and Canada (bit.ly/3j7WnGz).

For temperature extremes, we consider T10 and T90 from the ACI defined as follows:

For the corresponding mortality data, we gather death information from both the National Center for Health Statistics and the Centers for Disease Control and Prevention WONDER database. Since no data is publicly available on monthly population exposure, we choose to directly model death counts rather than mortality rates. Five representative age groups are included in the analysis, namely age 0, ages 1–24, ages 25–54, ages 55–84, and ages over 85. Similar to T10 and T90, we fit a seasonal-ARIMA model to these time series. In doing so, we obtain the ‘noise’ in the death counts, which can also be considered as ‘excess deaths’. We also include a GARCH component to capture possible heteroscedasticity in the death data.

The main findings of our research are summarised in Figure 3. We find that the frequency of hot temperatures has a weak impact on death counts across all age groups, which at first seems surprising because the negative impact of heatwaves on mortality is well-recognised and studied. However, it should be noted that high frequencies of hot temperature do not necessarily mean heatwaves. For example, a heatwave is defined by the Australian Bureau of Meteorology as four consecutive extremely hot days, while the definition in the US varies by region – generally two or more days of excessively hot weather. We also have the ‘harvesting effect’, or mortality displacement, which means that the hot temperature affects people who are so ill that they would have died anyway in the short term. Therefore, the monthly frequency of hot temperature alone may not be a suitable measure for mortality modelling. On the other hand, the frequency of extremely cold temperatures has a stronger impact on mortality, especially for people at older ages. The link between cold weather and influenza is a possible reason for this. We also find that the increase in mortality due to cold weather is long lasting, and that overall the elderly are more susceptible to extreme temperatures at both ends of the spectrum.

Managing the extreme risk caused by climate change is an increasingly important task for insurance and reinsurance companies. From the perspective of life and health insurance, age and region-specific analysis of climate-associated risk enables us to identify geographical locations that have high resilience to extreme weather events, as well as to pinpoint the more vulnerable segments of the population. Recalling the map of the six continental US regions in Figure 2, our research finds that the Southeast Atlantic region has the highest level of dependence between cold temperature and mortality for ages 55–84 and 85+. Thus we can see that there are regional differences in how elderly people react to extreme cold weather.

Further investigation on this topic is expected to provide insights on how government planning and insurance product design can help to better protect vulnerable populations from the adverse impacts of climate catastrophes.

This research is sponsored by the Society of Actuaries through the 2019 Individual Grant Competition. The project is titled ‘An EVT Approach to Modeling Joint Extremes in Climate and Mortality’.