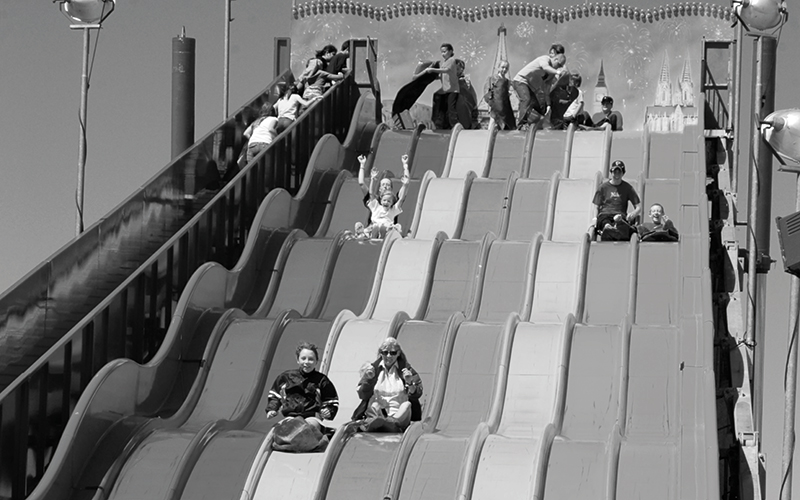 Since Markowitz’s concept of diversification was introduced in the 1950s, statistical models have been widely used to assess market and credit risk. We explore the evolution of these models and their application in the context of assessing the risk of credit migration and default.

A single firm’s probability of default

Structural models are widely used in credit risk, such as in corporate bond portfolios. They use the evolution of a firm’s ‘structural’ variables, such as asset and debt values, to determine probabilities of (economic) conditions under which borrowers are expected to default.

Merton’s model, developed in 1974, was one of the first. It assumes a firm’s asset value evolves over time, eg through a simple diffusion process (a concept introduced at the beginning of the 20th century by Louis Bachelier to model stock prices), according to the following formula:

where asset values A(t) are log-normal distributed, W(t) is a standard geometric Brownian motion, µ and σ2 are the instantaneous expected rate and variance of asset return, T is the period to maturity, and X is the return on the firm’s asset which is assumed to follow a standard normal distribution, given by

Default is triggered by a drop in the firm’s asset value below the value of its debt, as illustrated in Figure 1a. When a firm’s liabilities are known, probabilities of default can be easily determined across the standard normal distribution.

Probability of default at a portfolio level

Like Merton, Vasicek assumes that variables Xi in equation 2 are standard normally distributed. Vasicek also assumes a firm’s asset returns are correlated, a concept at the heart of Markowitz’s and modern portfolio theories. For simplicity, Vasicek assumes the asset returns are equicorrelated, such that variables Xi can be represented as linear combinations of jointly standard normal random variables Z and Yi:

with ρ a real number in the range -1 to +1. In a large portfolio, ρ is further restricted to be non-negative by a property of the equicorrelated normal distribution.

The use of the standard normal distribution for variables Xi, Z and Yi in equation 3 can be relaxed. Any symmetrical, standardised distribution for which the first two moments exist can be used without breaking the relationship in the equation (see Phillip Schönbucher, ‘Factor Models for Portfolio Credit Risk’, 2000).

With each firm’s asset return Xi of the form in equation 3, Vasicek denotes – not unlike the modern portfolio theory and capital asset pricing model – variable Z as a portfolio systematic factor (for instance, some measure of the state of the economy), and variable Yi as a firm’s idiosyncratic risk. Such models are known as ‘one-factor models’ and they have become very popular in credit risk modelling since their introduction in the 1990s.

A direct result from Vasicek’s framework in equation 3 is a firm’s probability of default, conditional on the common factor Z:

It follows that, conditional on the common factor Z, firms’ loss variables are independent and identically distributed with a finite variance. A portfolio’s loss can thus be represented by a single variable on the scaled distribution of variable Xi. Although it is overly simplistic, this set-up is helpful for analysing historical data (such as historical default rates) and for understanding the implications of asset distributions and the correlations in credit risk modelling. 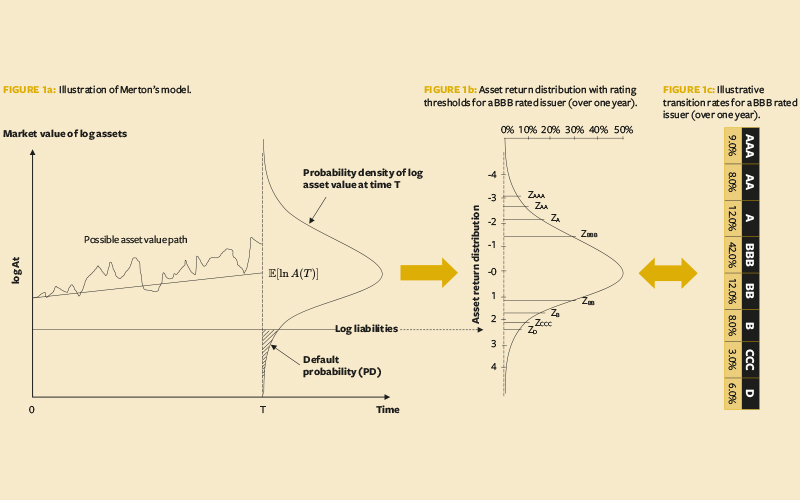 Extending the concept to transition states

The Merton and Vasicek single variable models can be extended to cover the migration of credit risk. Instead of unconditional historical transition rates, we assume that firms’ credit ratings migrate in accordance with the standard normal distribution (Merton) and the correlation between firms’ asset returns (Vasicek).

This is illustrated in Figure 1b and Figure 1c, for a firm rated BBB at the beginning of the year. For a set of credit rating thresholds from AAA to Default (known as Z-measures or Z-scores), conditional transition probabilities can be determined across the standard normal distribution (Figure 1b). Alternatively, the corresponding unconditional transition probabilities from, say, published transition matrices can be used to determine credit rating thresholds via equation 4.

This sort of approach has the merit of simplicity, while the asset correlations used as inputs and the potential interpretations of the economic cycle are valuable in their own right. In recent times, there has been a trend towards using more complex copula-based approaches and machine-learning techniques.

The two most appealing features of the one-factor model are the common variable Z and correlation parameter ρ. Variable Z can be seen as a measure of the ‘credit cycle’; in good years it will be positive, implying a lower-than-average default rate and a higher-than-average ratio of upgrades to downgrades. In bad years, the reverse will be true. A Z value of 0 is equivalent to the (long-term) average year.

The one-factor representation offers a practical approach to model credit risk in various circumstances such as to:

where Xi, Z and Yi are as per Vasicek’s framework in Equation 3, with Xi the standardised asset return of
a portfolio in an transition matrix.

Using a set of historical transition matrix data, starting from Vasicek’s framework, the method employs a numerical algorithm to calibrate ρ and Z factors subject to meeting certain statistical properties, such as solving for the variance of Z on the selected distribution. The calibration of Z factors is relative to their 0 long-term mean (ie corresponding to the average historical transition matrix).

Although the distributions in this approach are all standard normal, any qualifying distribution can be used – such as Student-t with, say, three degrees of freedom (an obvious reason being that Student-t with a low number of degrees of freedom has fatter tails). When we repeat this numerical method with transition matrix data from Moody’s (1920-2019), the values of ρ are around 5% under standard normal and around 8% under Student-t. By way of illustration, the resulting calibration of systematic Z factors based on Moody’s historic data under the two distributions is shown in Figure 2.

Note that Z values from Student-t are more extreme due to their higher variance. Also, assuming a fixed asset covariance, under the standard normal distribution we would require a ρ three times higher (increasing to circa five times – ie   × 3 – in our example above) in order to make fitted transition rates comparable under the two distributions. (It is known that the correlation ρ of two variables is given by the ratio of their covariance to the product of their standard variance.)

Several conclusions can be drawn from Figure 2. Regardless of the distribution, it shows consistent results, such as the extremely negative values during the Great Depression of 1929-1933, crises during the 1980s and in 2008/09, and the relatively mild positive values from the 1940s-1960s. The correlation with GDP trend is not perfect, however, owing to the simplifications used. 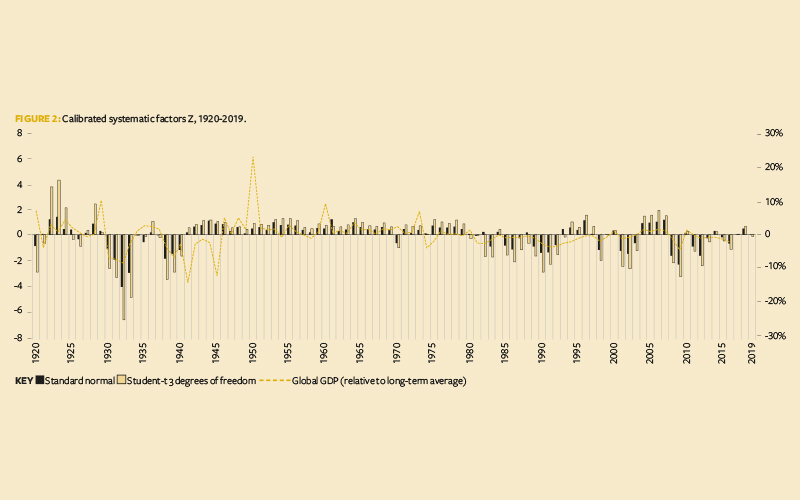 The calibrated Z values lend themselves to being used in a time series, which enables us to statistically extrapolate the Z values for projecting future credit portfolios. A detailed statistical framework is again given in Belkin and Suchower, in which the calibrated Z values provide the input for an auto-regressive process in the form of a linear equation, where the slope parameter sets the intensity and length of a ‘glide path’ towards the long-term average of systematic factors.

Two attributes of such a process are stationarity (variables unchanged over time) and the systematic factors having a long-term mean of 0 (in line with the Z values). For illustration, four glide paths (with slope parameters of 40%, 50%, 60% and 70%) are shown in Figure 3.

In credit risk modelling, time series of Z values (whether in one-factor or multi-factor models) are widely used for pricing credit portfolios and capital planning. They can also be used in insurance, for example in the context of a matching adjustment under stress. 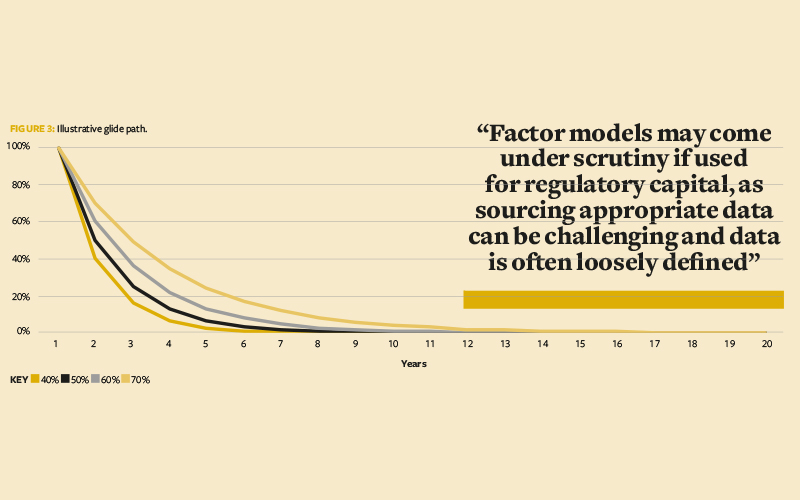 One-factor models are widely used for regulatory capital for credit risk, particularly for banks, thanks to their so called ‘portfolio-invariance’ property (see Michael Gordy, ‘A Risk-Factor Model Foundation for Ratings-Based Bank Capital Rules’, 2002), which played an important role in the Basel Committee’s decision to adopt these models for credit risk capital for banks.

Multi-factor models are more commonly used in pricing as they can better capture specific characteristics of credit portfolios (such as sectors or geographies) – a desirable feature in price-sensitive transactions. These models are more complex and beyond the scope of this article.

Factor models can also be based on systematic factors such as GDP, unemployment or inflation. However, these may come under scrutiny if used for regulatory capital, as sourcing appropriate data can be challenging and data is often loosely defined. This was illustrated in Figure 2.

Factor-based models are widely used, for example in:

More generally, the approaches discussed in this article can be applied to any portfolio of assets or liabilities, as long as they are subject to a random process (akin to variable X in Merton’s model), and appropriate conditions are met.

This article appeared in our March 2021 issue of The Actuary.
Click here to view this issue
Filed in
General Features
Topics
Investment
Risk & ERM
Modelling/software