As The Actuary celebrates its 30th birthday, David Raymont digs into the archives to acknowledge its predecessor Fiasco, which ran for 127 issues between February 1978 and June 1990. 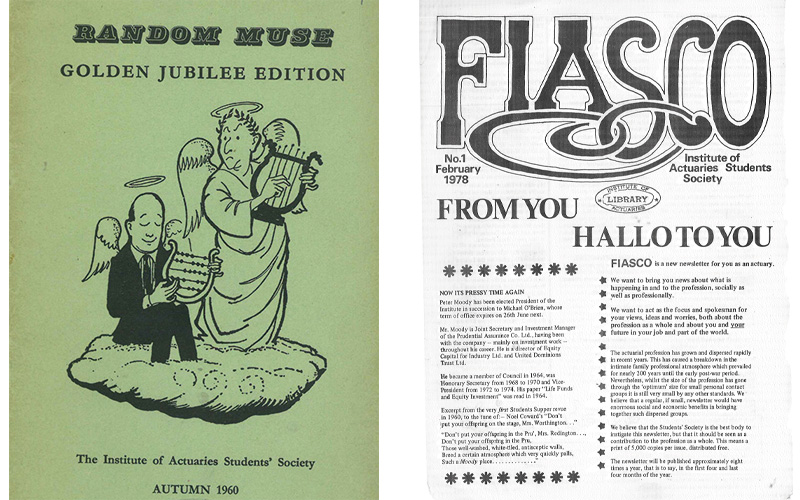 The go-ahead for Fiasco magazine was given in late 1977, 30 years after the previous attempt, Random Muse, had folded after 13 issues and 18 months – mainly due to a lack of contributions. The Institute of Actuaries Students’ Society had long seen the need for a form of communication that went beyond formal contributions to papers at Institute and Society meetings – which not all UK members could attend, let alone international members.

The first issue of Fiasco was launched under the editorship of Jim Lagden in February 1978, initially describing itself as a newsletter. Jim had a background in organising festivals for cities and towns, and was the arts and entertainments organiser for the London Borough of Hammersmith; he set the magazine’s tone of humour and diversion. He was assisted by Jackie Millar, deputy secretary at the Institute and later his wife. Together they pasted the pieces into four pages, ready for printing and free distribution to 5,000 members. In 1990, Fiasco’s penultimate editor, Eugene Smyth, paid tribute to Jim, calling him “the moving spirit” of the publication (Fiasco 124, March 1990).

Fiasco was an ‘amateur’ production in the best sense, with editors and contributors showing dedication to the field and community, each progressing the magazine and professionalising its look and feel. Sadly, Jim and Eugene are no longer with us, but former editors Peter Turvey, David Campbell, Peter Thompson and Stuart Southall keenly recall their experiences. They remember a ‘primitive’ editorial system, with layouts devised on lounge floors during the weekend, and paper content literally fitted and glued before the pages were handed over to the printers. 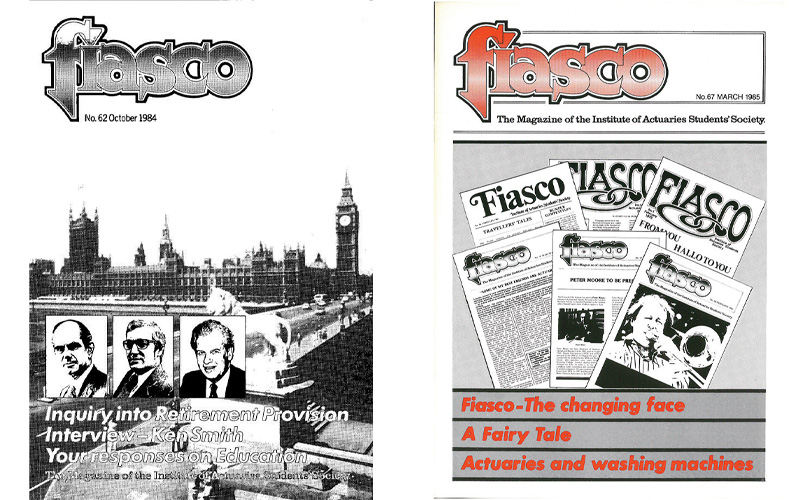 The magazine grew from four to eight pages, then regularly hit 12 and, in its final year, 20 and 24. Its style evolved, adding a masthead logo and red-orange headings. Picture covers were in black and white, the exception being a cover that featured the striking stained glass windows donated to Staple Inn Hall by the Students’ Society on its 75th anniversary in 1985. Incoming job advertisements helped fill the pages and provided income that made the magazine more than self-funding. This allowed stylistic development, and also presented an actuarial ‘problem’ to the Society when it came to applying the surplus!

Conversations with former editors and contemporaneous records provide fascinating insights into Fiasco’s approach. The name itself was not uncontroversial: the play on the qualifying FIA post-nominals made for a self-deprecating title, and Peter Turvey felt there was a risk that the magazine would not be taken seriously. However, the readers took to it. ‘Incendiary’ punning in sections such as ‘FIAside Chat’, where job moves and appointments were reported, kept the humour a little more carefully confined – but never barred – as more serious technical pieces began to be submitted.

The editorials from the first issues of Random Muse in 1946, Fiasco in 1978 and The Actuary in 1990 express similar aspirations: to bring together distant members, engender community and stimulate participation. Given the Institute’s membership profile in 1978, it could be assumed that the magazine’s largely UK-based setting and contributor/reader demographic would flavour its content and tone. However, those involved assert that they were keen to engage widely dispersed members. 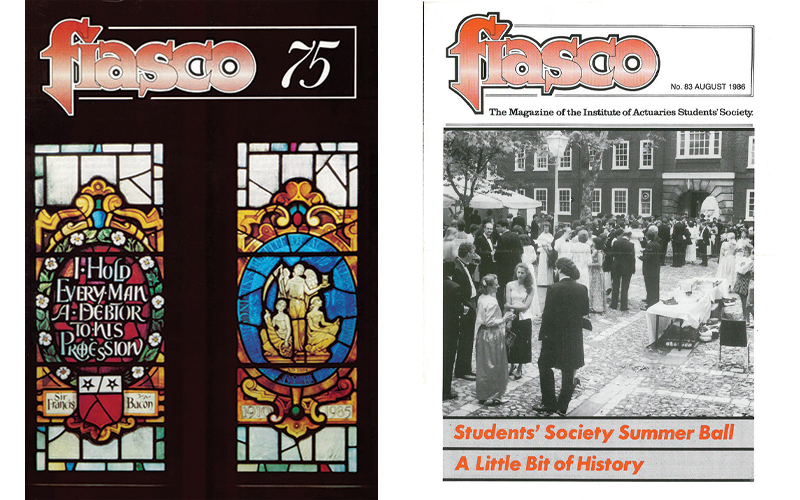 In his editorial for Fiasco 19, in April 1980, Peter Turvey outlined the regular features: digest reports from Institute and Students’ Society meetings and other conferences, technical articles, ‘FIAside Chat’, job advertisements, puzzles (contributed and led by the ‘indefatigable’ Tim Sole from February 1980 to December 1989) and humour. Above all, there was members’ correspondence: Fiasco’s pages are a republic of letters on a broad range of topics, often light-hearted and with some lengthier ones edging towards being full-blown technical articles.

When designer Ross Russell’s new three-curve logo for Staple Inn Actuarial Society was revealed (Fiasco 98, November 1987) with the explanation that one of the curves represented the trajectory of drinking beer, suggestions followed that the profession should not treat itself so frivolously. Still, the magazine contributed its share of serious articles, too. Actuarial education, syllabus changes and exam support were recurring themes – perhaps to be expected in a magazine supporting students. The advent of computerisation and programming prompted a series of instructive outlines. The profession made its presence felt in areas such as the proposed pension reforms of the 1980s, technical considerations around work on maturity guarantees, and the dreadful impact of the HIV/AIDS epidemic of the late 1980s, among other things.

Chris Lewin and Trevor Sibbett’s series of some 50 articles on actuarial history and pioneers, ‘1848 and All That’, ran from 1986 into the early years of The Actuary; these have been particularly instructive for my role as IFoA librarian. Humour persisted, often merged with the serious and thought-provoking. Jim Lagden reappeared (Fiasco 54, December 1983) with an essay on Frank Redington’s 1968 “An actuary who is only an actuary…” quotation.

Fiasco did not operate in a political vacuum. In 1980, it highlighted actuary members who were serving as Labour local councillors (Fiasco 17, February 1980); this provoked calls for balance, with correspondents flagging their work as elected Conservatives and Liberals in local government. But for its arrival during the final year of James Callaghan’s Labour government, Fiasco spanned Margaret Thatcher’s Conservative administrations, and the magazine held neutral – often with humour. It provides a time capsule of the views freely shared among actuaries of the 1980s – views that were perhaps not exhibited so freely again until social media revived the tradition of ‘lively exchange’.

Actuarial input in the media was also highlighted. The April 1980 issue reported that 17 members had appeared on BBC Radio 4’s Moneybox since Fiasco had began. Monica Allanach, the first woman to sit on the Institute’s Council, wrote about her interviews on life assurance for Today in 1973 and Woman’s Hour around 1977, recalling that the BBC presenters were more interested in their car insurance premiums and the cost of insuring Marlene Dietrich’s legs (Fiasco 21, June 1980)!

We might say that Fiasco was ‘unfiltered’ in its accommodation of content, and all the better for it – allowing that editors might have quietly stopped some contributions from seeing the ‘FIAlight’ of day. Stuart Southall admits with hindsight that his youthful editorials were contentious, but had the “effect of stimulating debate and flushing out a spectrum of views”. If there was ever a perceived overstepping of the mark, a counter response would be published. 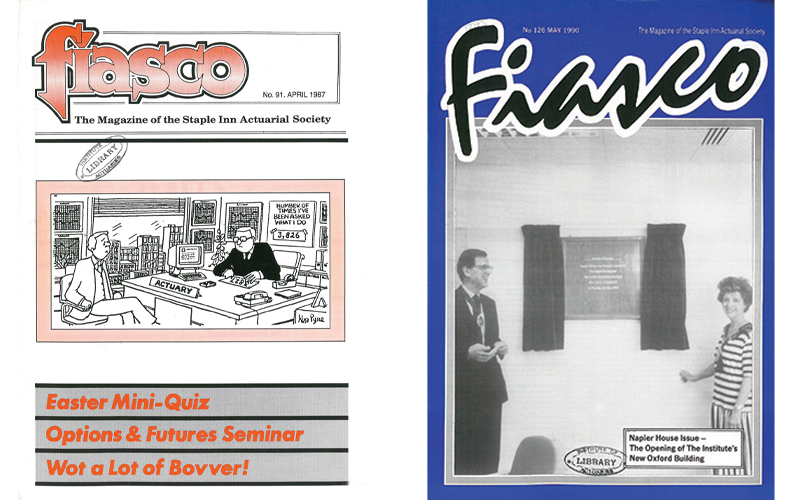 From the outset, Fiasco was keen not to stand still, and wanted to engage with its community. Stylistic changes were made; in 1988, issue 107 sported a new-style front page and masthead, and the following issues went through a catalogue of cover colours. Yet there was a sense that, as a magazine run on an ‘amateur’ model, the writing was on the wall. In Fiasco 100 (February 1988), 10 years after its first issue, editor Stuart Southall invited contributions from former editors. David Campbell pondered what a future pensions actuary would face just seven years ahead; Jim Lagden remarked on the fact that the Institute now had a press officer, public relations and futures committees and a higher profile, yet retained “a genuine, consistent, long-term professional morality” that he was “all for”. And Peter Thompson asserted that the profession needed a “proper grown-up magazine” – not just to give editors their weekends back, but also so that the profession could make “a huge leap forward in professionalism, prestige and credibility”.

One letter demonstrates another requirement for a new magazine: responding to a contentious editorial of April 1989, member John Woodall wrote in from Uganda, taking the editor to task for his remarks on the AIDS epidemic (Fiasco 119, October 1989). He reported that Uganda was especially affected, and wished to comment from “another perspective: I was disappointed that your editorial seemed to reflect a narrow UK, not to say parochial view… I hope that future editorials will stimulate discussion and controversy, but display rather more sensitivity of the place of actuaries in the wider world. There are few enough of us in this part of it…” Clearly one editorial does not define a whole magazine, and any editor’s work and risks in stirring debate, with balance and tact, must be acknowledged – but the need for a broad worldview was still pertinent.

By 1990, then, the direction of travel was towards a ‘proper’ magazine. Aside from content, the practicalities of producing Fiasco were a major consideration; the engagement of typesetters had been a welcome advance, but was this work for actuarial professionals to be doing on top of their day jobs? There was clearly a need to combine actuarial expertise and oversight with the commercial publishing industry’s product focus and professional skills – editing, production, distribution, marketing etc. The Actuary’s first issue restated the aim of encouraging debate and putting new research to the sounding board of its readers. The value of engagement with professional production became clear, with professional managing editors working closely with Institute and Faculty colleagues to assemble each monthly magazine.

Reflecting on his involvement with Fiasco, David Campbell highlighted his enjoyment of its irreverence and entertainment value, “sustained by a dedicated band of volunteers and the willingness of members to think of a subject and write”. Fiasco succeeded in reaching out to its audience and establishing lively dialogue. To effectively present and share actuarial perspectives in a credible way that could also attract the notice of policymakers, and to truly represent its global community, Fiasco needed to take that leap forward. Both I and the former editors would like to think that the ways actuarial practice, policy and discussion are shared can still accommodate the amateur joy, spirit and humour of Fiasco.

With thanks to past editors of Fiasco, Peter Turvey, David Campbell, Peter Thompson and Stuart Southall for their enthusiastic responses to our request for reminiscences. We respectfully remember Jim Lagden and Eugene Smyth.

David Raymont is the IFoA librarian.

This article appeared in our December 2020 issue of The Actuary.
Click here to view this issue
Filed in
General Features
Topics
Professional
Careers