Brandon Horwitz looks at assessing value for money for investment funds, and how remedies adopted by the FCA aim to build on a duty to act in the best interests of investors 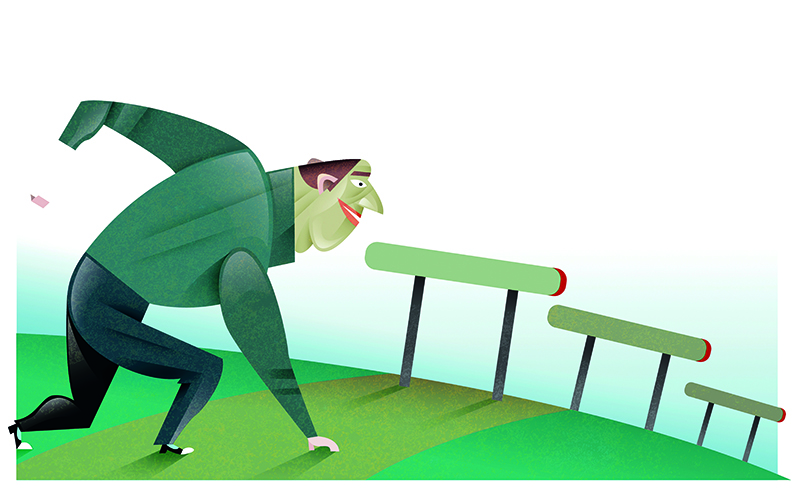 Fund management charges have been the subject of increasing scrutiny during the past 10 years. This has been driven by increasing transparency of charges and historically low investment returns. The value for money (VFM) of fund charges has also been in the spotlight, both in the popular financial press and because firms are keen to be compliant with the latest regulations.

What factors have led to this focus on VFM by regulators? How is VFM now being applied to authorised investment funds? And what action has been taken by firms in response to their assessments of value?

Leading up to the VFM focus

The current focus can be traced back to the pension mis-selling scandals in the UK between the 1980s and early 2000s. A common theme was the inappropriate switching of customers from lower-cost employer pension schemes to higher-cost personal pensions. Regulatory interventions included introducing stakeholder pensions with a cap on charges (in 2001) and the Treating Customers Fairly principle.

The global financial crisis of 2007-08 was followed by significant falls in equity markets and interest rates as quantitative easing was introduced. This resulted in historically low returns, which in turn shone a light on the impact of charges on these returns.

The Retail Distribution Review, effective from 2013, increased transparency around what customers pay for advice versus charges for investment funds.

In 2017, the Financial Conduct Authority (FCA) published the results of its Asset Management Market Study, which raised issues about the VFM for authorised funds. It followed this by publishing detailed regulations for fund managers.

Authorised funds are a type of collective investment scheme authorised by the FCA. The two most common types are unit trusts and open-ended investment companies.

Authorised funds enable individuals to invest in a diversified portfolio of securities (such as equities and bonds) and certain other assets (such as real estate). Investors’ contributions are pooled and invested on their behalf by professional fund managers.

Life and pension funds (unit-linked funds) are similar economically to authorised funds, but fall under different regulation (including VFM requirements). 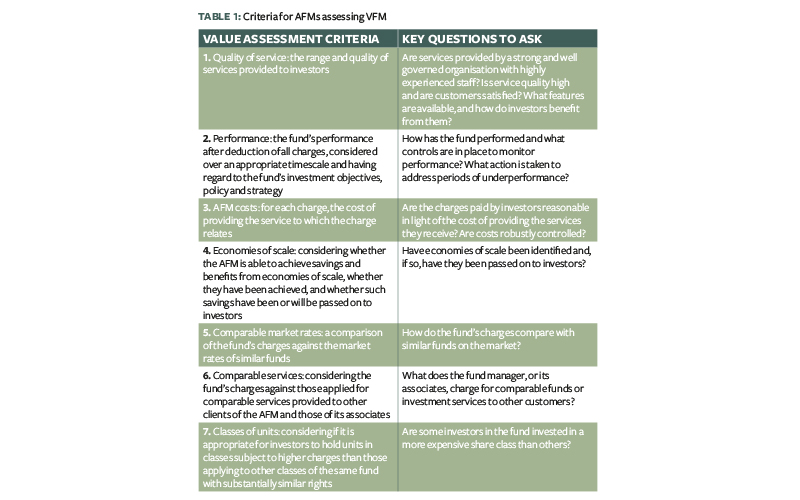 The FCA’s findings and remedies

The final report of the FCA’s Asset Management Market Study (bit.ly/FCAreportActuary) included key findings such as:

The remedies adopted by the FCA to address these findings aim to build on AFMs’ existing duty to act in the best interests of investors. They require AFMs to assess and justify their fund charges in the context of the overall service and value provided to investors. Importantly, they noted their view that AFMs are the agents of the investors in their funds, and not just ‘product providers’.

The regulator introduced seven specific criteria for AFMs to consider when assessing VFM. AFMs are required to either conclude that each fund offers good VFM or take corrective action if it does not, and to explain the assessment in an annual public report. These criteria are summarised in Table 1, with an interpretation of some of the questions that should be asked to undertake this assessment.

The FCA also introduced the requirement for independent non-executive directors on AFM boards to balance the interests of fund investors and shareholders. This is a nod to the fact that AFM boards are generally staffed exclusively by executives of the fund manager. Boards need to have at least two independent directors, and they should comprise at least 25% of the total board.

Fund managers have been publishing the results of their value assessments during the course of 2020 with a variety of styles, but all aim to cover the FCA’s assessment criteria and generally include some remedies to any issues identified. The most common actions taken are:

While the quality of reports and actions vary significantly, it appears that the regulation has succeeded in focusing attention onto this important area of VFM for investors. The FCA is to undertake a thematic review of the first value assessments, with findings expected in 2021.

While any actions taken are likely to benefit investors overall, a key question is whether retail customers will have engaged with published value statements. These customers tend to rank fund performance as the most important VFM factor, according to research from Boring Money (bit.ly/BoringMoneyActuary).  So, while fund managers will have raised their game to comply with the regulations, it’s worth remembering that it is investment performance that matters most to customers when they assess value.

This article appeared in our November 2020 issue of The Actuary.
Click here to view this issue
Filed in
General Features