Saunak Dutta provides an overview of India’s two newest crop insurance schemes, the benefits they provide, and how they are priced 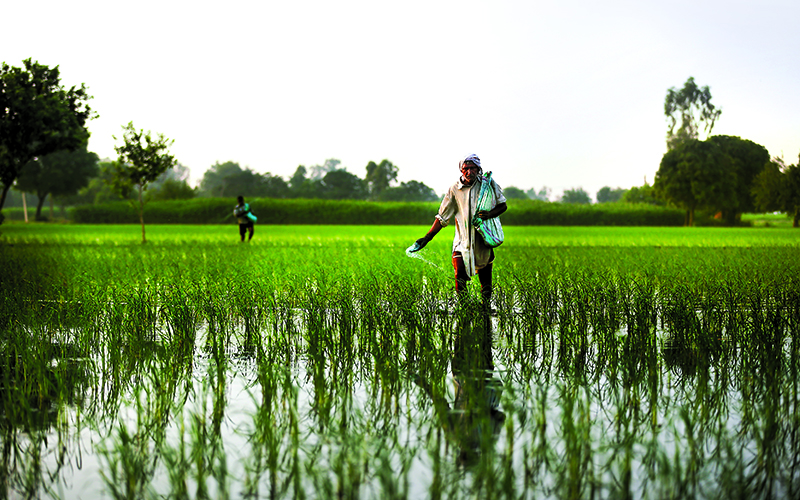 Agriculture plays a significant part in Indian society, and generates the most employment. According to the country’s Ministry of Agriculture, almost 50% of the workforce is engaged in agriculture, and it contributes around 17% in GDP.

This key sector faces multiple challenges and is extremely susceptible to natural calamities such as droughts, floods and locust infestation. During the past five decades, successive governments have tried to protect farmers’ interests by providing them with protection from these natural calamities (see Figure 1).  However, it was with 2016’s nationwide introduction of two indemnity and parametric-based coverages – the Prime Minister’s Crop Insurance Scheme, known as Pradhan Mantri Fasal Bima Yojana (PMFBY), and the Restructured Weather-Based Crop Insurance Scheme (RWBCIS) – that crop insurance in India underwent significant changes. 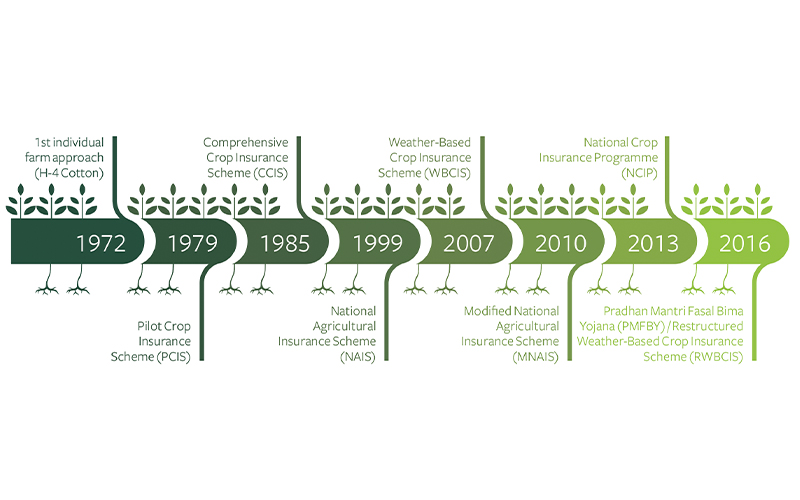 PMFBY is an area-based yield-index insurance scheme. It dominates the crop insurance scenario, accounting for nearly 90% of premium. It is designed to provide comprehensive insurance cover against crop failure, provide income stability, and encourage digitisation and innovation. It covers all food crops, oilseeds and annual commercial and horticultural crops grown in the rabi (winter) and kharif (monsoon) seasons. The scheme is implemented by central and state government agencies and insurance companies, which are empaneled based on their experience and financial strength.

From kharif 2020, the scheme is optional for all farmers (including loanee farmers) provided they have insurable interest for the insured crop or land (previously, this scheme was compulsory for loanee farmers and voluntary for non-loanee farmers). Loanee farmers are farmers who have used institutional credit for agricultural activities.

Companies participate in a tender bidding process to be able to cover a certain geographical area, called a ‘cluster’. A large state may be divided into a number of clusters. From 2020, a successful bidder will cover a cluster for a three-year period, as opposed to one year, as was the case until 2019. This is mainly to encourage insurance companies to increase their focus on profitability and infrastructure development.

State governments will compulsorily provide available yield data for the previous 10 years to bidding companies. Other information that may also be provided include the sum insured and indemnity level, crops covered, claims experience and other scheme details. Between 1.5%–5% of the actuarial premium rate is borne by the farmers based on the crop they are sowing; the remaining premium is shared by the state and national governments.

Since this is an area-based yield-index scheme, yield is determined for an area as objectively as possible via ‘crop cutting experiments’ (CCEs) that use technology, smart sampling and so on, in selected plots that are kept secret in order to minimise moral hazard. The scheme will be implemented on an ‘area approach basis’ in selected areas called insurance units (IU), where the unit of insurance will be at village level for major crops (where the sown area is at least 25% of gross cropped area).

Three levels of indemnity (70%, 80% and 90%), corresponding to crop risk in the areas, will be available for all crops.

Claim pay-outs based on yield losses shall be calculated using the following formula:

In addition to this base cover, there are four add-on covers: prevented sowing/failed germination (indemnity based, up to 25% of sum insured is covered); mid-season adversity (flood or prolonged doubt resulting in yield below 50% of normal results in an on-account claim payout); crop loss due to localised calamity; and post-harvest cover (compensation is paid for crops spread out to dry if they are damaged by unseasonal rain.)

RWBCIS constitutes around 8%–10% of the crop insurance portfolio. The structure of farmers’ premia, selection criteria of the insurance company and area allocation are similar to PMFBY. The claim settlement will be based on predefined terms drawn from weather parameters. Horticulture crops such as vegetables and fruits, or other crops where ascertaining crop yield through conduct of CCEs is not possible, are commonly insured under this policy.

Until 2015-16, under the National Agricultural Insurance Scheme, premium rates were capped to make the premium affordable to farmers, and additional claim liability over the premium amount was also subsidised by the government. As claim calculation was a long-drawn process that was largely dependent on actual crop yield outputs, it was relatively difficult to ascertain the total government budgetary requirement for a given year in advance. 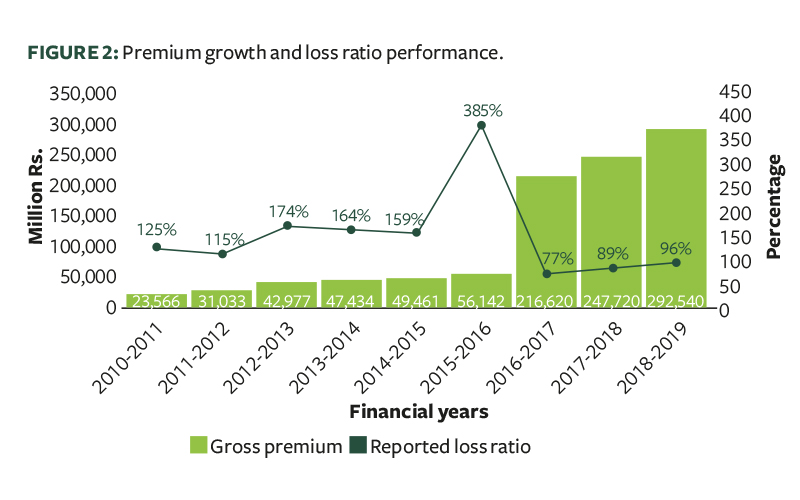 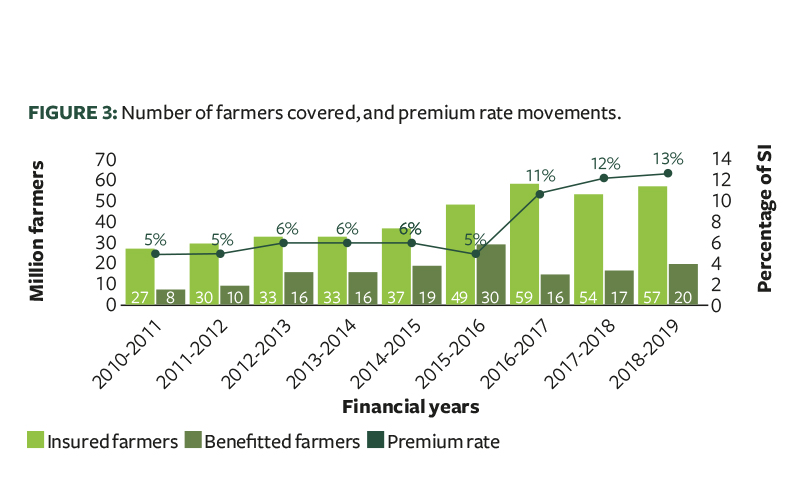 With the introduction of PMFBY in 2016-17 the claims subsidy was removed, and focus shifted to the premium subsidy share arrangement between central and state governments. As the entire claim liability under all crop insurance schemes is borne by implementing agencies, it is much easier for the government to ascertain budgetary requirements for crop insurance in advance.

Crop insurance gross written premium (GWP) for empaneled insurance companies also received a big boost when PMFBY was introduced. The loss ratio performance had been quite negative over the years, with 2015-16 especially bad due to severe drought.

This is a heavily reinsured portfolio, with the empaneled insurance companies relying on reinsurance support. With the introduction of PMFBY, almost 75%-80% of risk is now ceded to reinsurers.

The introduction of PMFBY also brought some much-needed pricing correction, with full implementation of actuarial premium rates in the market since loss ratios became unsustainable by 2015-16. Additionally, it has enhanced the benefit’s scope, bringing millions of additional farmers under insurance coverage. 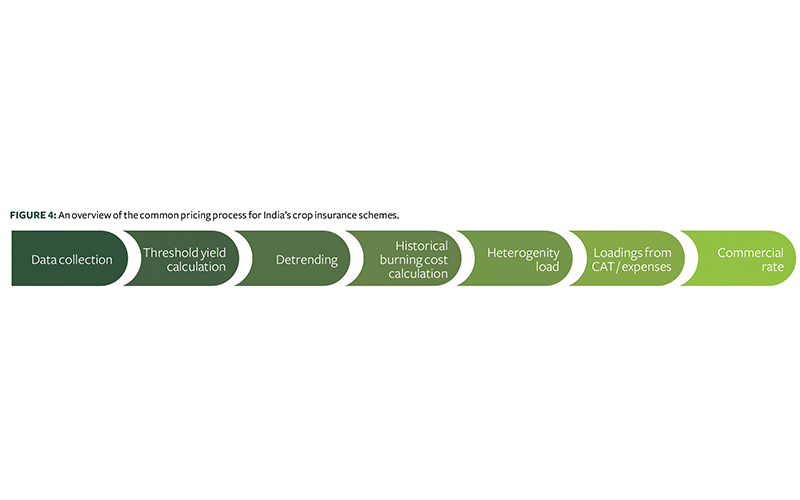 The pricing process and challenges

The pricing process followed by most of the market’s empaneled insurance companies can be broadly seen in Figure 4.

In these schemes, data from the past 10 years at the level of each insured unit (claims settlement level) is usually used. Although new data is added every year, the quality of data for older years is poor, with missing data points and differences in aggregation levels and formatting.

The threshold yield of a crop is calculated as the moving average yield of the best five out of the past seven years, multiplied by the indemnity level.

A data heterogeneity loading is believed to be required since the historical yield data is at a coarser resolution than the final loss settlement, which means that volatility is not represented well enough in the historical data.

Some of the other expenses incurred by insurance companies that are mandated by PMFBY operational guidelines or state governments are as follows: 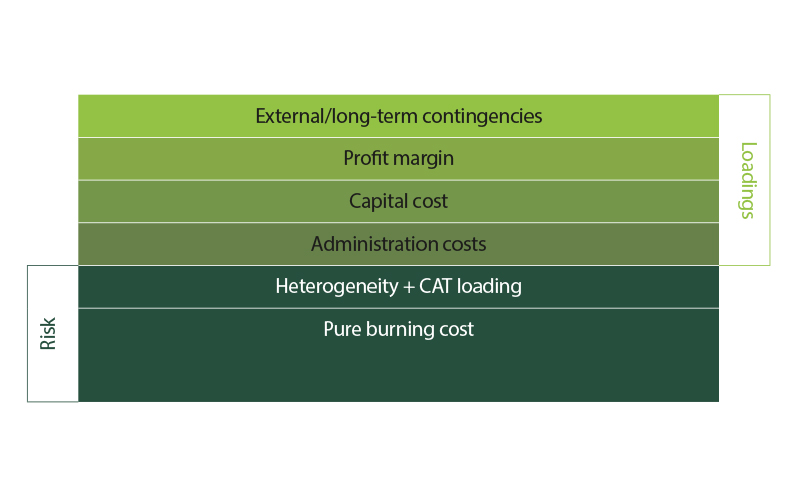 There is abundant scope for improving data quality and processes thanks to crop insurance’s digital revolution, including technological advancements in satellite imagery and advanced satellite technology that allow soil moisture data to be measured, the use of drones for crop-cutting experiments, and the enabling of cloud monitoring and digital connectivity through mobile apps. Even though actuaries are involved in risk-based pricing, they can also add value in other traditional and non-traditional aspects of the crop insurance ecosystem – detecting fraud using artificial intelligence or data science techniques, monitoring exposure, tailoring reinsurance treaties, improving techniques for de-trending and heterogeneity adjustments, and using models for reserving and capital management.

Actuaries can also work closely with the government and play a crucial role in devising new risk management mechanisms such as crop risk pools, for achieving the goals of crop insurance.

“The introduction of PMFBY brought some much-needed pricing correction and enhanced the benefit’s scope, bringing millions of additional farmers under insurance coverage”

Saunak Dutta is assistant vice president and pricing actuary for Casualty Asia at Swiss Re, and a member of the Gl Asia Working Party