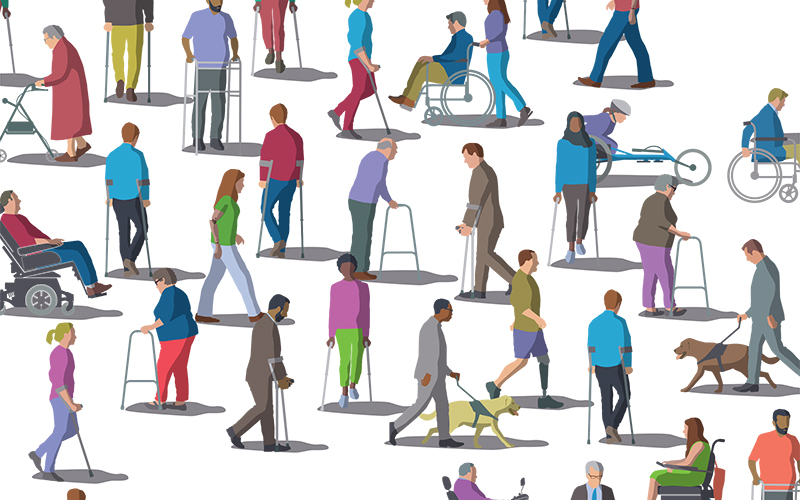 A significant number of actuaries carry out work relating to the assessment of damages in court cases, usually involving personal injury. The most common type of calculations carried out by actuaries in this area are those relating to loss of pension entitlements as a result of the claimant being injured and having to cease employment. The use of actuarially based tables such as the Ogden tables is accepted as standard practice in court cases.

The situation was very different up until 1995, and the process of securing a proper actuarial basis for these calculations was a long one. Although attempts had been made to use actuarial calculations in court cases going back to the 1960s, no judge in the UK had been willing to accept this type of evidence.

For almost a century, up to the 1960s, judges calculated loss that involved future payments by applying standard multipliers to the annual amount of the loss. The multipliers were based on a rate of interest of 5% per annum, which meant the highest multiplier that could be used was less than 20.

In the 1960s, it began to be appreciated that awards for damages involving long-term loss based on the traditional multipliers were too low because of the effects of inflation. A significant case at the time involved the drug thalidomide, marketed by the Distillers Company (now part of Diageo) as a cure for morning sickness. It was discovered that thalidomide caused devastating injuries to unborn children, and a number of legal actions were raised against the Distillers Company by the families affected.

In one of these cases it was decided to consult an actuary called John Prevett. Prevett immediately demonstrated that the amounts required to provide for the costs of long-term care for these children – who in the worst cases had been born without arms or legs – were much higher than the amounts that would be determined using the conventional methods of assessing damages.

When the case came to court, the judge rejected the actuarial evidence, despite the fact that it demonstrated quite clearly how much would be required to make adequate provision for the needs of these children and their families. A few years later, when the Sunday Times was investigating the thalidomide case, it brought Prevett into its advisory team; using his calculations, they persuaded the Distillers Company to make a much higher offer to the families on the basis that Prevett’s arguments were liable to be accepted by the Court of Appeal. Unfortunately, the fact that it was an out-of-court settlement meant that the methods used by Prevett could not be used as a legal precedent.

During the 1970s and 1980s, repeated attempts were made to use actuarial methods in court, but judges were very reluctant to abandon their traditional methods. One judge, having received widely different figures from actuaries acting for each side, commented that “he would prefer to accept the evidence of an astrologer to that of an actuary”.

However, despite government approval of actuarial methods, the courts continued to rely on the traditional method. It’s likely that judges were reluctant to replace the traditional levels of awards with factors that they could not readily understand, such as the derivation of the factors in the Ogden tables.

In about 1990, I was asked by Frank Maguire, a leading figure in personal injury work in Scotland, to work with him on ways we could obtain more realistic figures for damages. Maguire knew about Prevett’s work and saw actuarial methods as a way of obtaining more adequate compensation in cases of serious injury or death. We had some success in obtaining settlements that did not involve going to court, but it still seemed that it would be difficult to get our figures accepted by a judge in a formal decision.

In 1995, another firm of solicitors, Digby Brown, asked me to look at the case of Gary Stevenson. Stevenson had sustained serious head injuries in a car accident at the age of 18 and would require care for the rest of his life. His vital organs apart from his brain were undamaged and, according to the medical opinions gathered by the firm, he would likely survive to a normal life expectancy. It was obvious that a conventional award for damages would not provide enough cash to provide for his lifelong care.

With this in mind, I decided to set out explicitly how an award for damages would be used up in the future depending on how much the cost of care rose faster than inflation. The year-by-year projections I produced showed the exact age at which Stevenson would run out of money to pay for his care, depending on the assumptions that were made about future care costs.

Our arguments were accepted, resulting in Gary Stevenson being awarded what was at the time a record amount for damages. It is my understanding that the case of Stevenson v Sweeney was the first case in the UK where actuarial calculations were accepted as a basis for the assessment of damages in a personal injury case.

I believe the factor that convinced the judge to accept actuarial evidence in our case was emphasising the age at which the cash would run out in the various scenarios being considered. I think that this allowed the judge to see what was happening, in a way that producing actuarial factors (out of thin air as far as many judges were concerned) did not, and demonstrated why conventional awards were too low.

The Stevenson case attracted a lot of attention at the time because of the level of damages; it is mentioned in the standard textbooks on personal injury in Scotland. Later that year, the Civil Evidence Act 1995 permitted the use of the Ogden tables and I was told at the time that the Stevenson case was taken into account when the act was being drafted. It is certainly the case that it had the effect of increasing the levels of awards in personal injury cases that came to court subsequently. The next year, in a case involving a Miss Martin who had been badly injured, I carried out calculations that were again accepted by the court, and another record figure for damages was established.

In any event, the use of actuarial evidence soon became widespread, with significant benefits to people who had suffered serious and life-changing injuries in accidents, or those whose relatives had been killed in accidents. There was considerable satisfaction in helping people receive adequate compensation, and working with solicitors and advocates was very interesting. Attending courts, particularly the Court of Session in Edinburgh, was often exciting, as the outcome of any case was never certain.

John Prevett died in 2010 and his obituaries in the national press make very interesting reading, demonstrating how our profession can make a significant contribution to the best interests of the general population through the application of actuarial thinking.