Prepare for Impact from COVID-19

James Sharpe, Nicole Austin and Andrew Rowe of the Extreme Events Working Party consider the economic outcomes that COVID-19 could cause for insurers 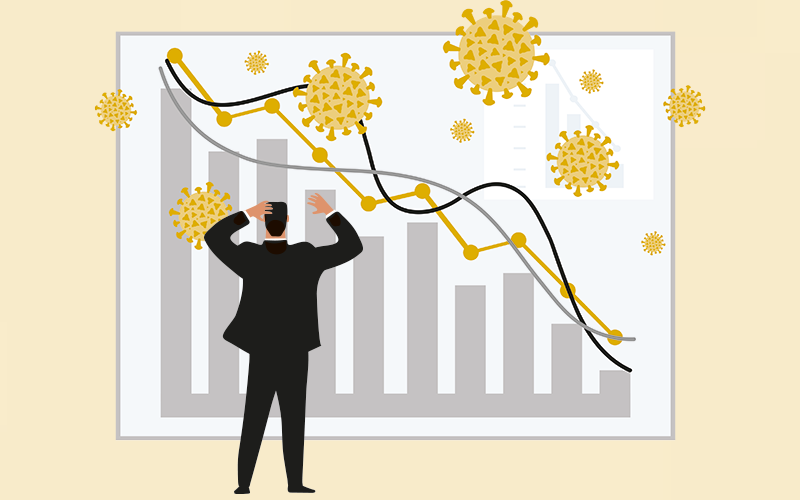 On 11 March 2020, the World Health Organisation declared COVID-19 a pandemic. Since then, most of the world has been in some form of lockdown, from which some countries have only now begun to emerge. At the point of writing, the number of cases worldwide exceeds 13m, with almost 600,000 deaths. Official statistics indicate that UK COVID-19 deaths are more than 50,000, with excess deaths at 62,500 as of 26 June. Both the pandemic and its economic impacts are far from over.

The extent of the economic impact will depend on how long the effects of COVID-19 last, and on countries’ economic outlooks before the pandemic. In the UK, outcomes will likely be exacerbated by Brexit. Table 1 emphasises a plausible range of outcomes. Under the moderate or severe scenarios, the impact on specific sectors could be as described in Table 2.

One reason that pandemics lead to depressed real interest rates is a reprioritisation of labour versus capital. However, compared to historic pandemics, coronavirus lockdowns have so far limited the loss of life to 0.5 million – much lower than the death tolls from Spanish flu (100 million) or the Black Death (75 million). The mortality impact disproportionately affects older people, who are less likely to be active members of the workforce.

Job losses as a result of the virus and lockdown could significantly impact the economy. So far, this has been ameliorated by the furlough schemes. Consumer spending, already reduced, will fall further as support schemes end. 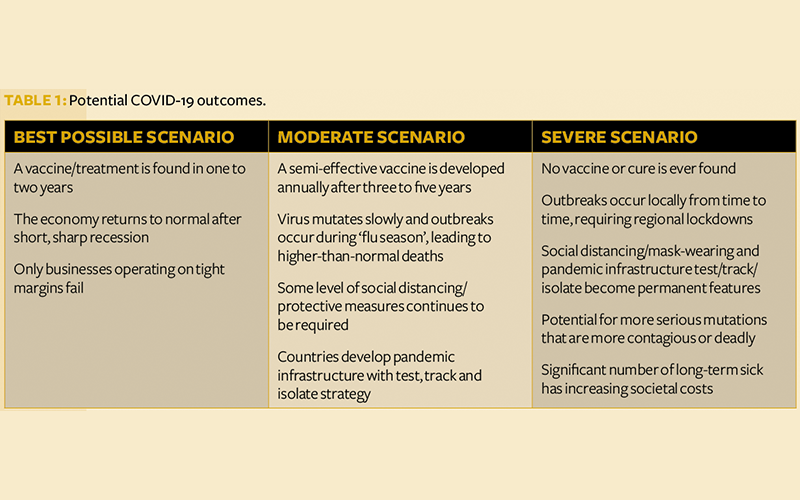 When it comes to debt levels, the pandemic’s effects on people will depend almost entirely on whether they can work from home (Table 3). Overall, private indebtedness has fallen, while lending to businesses has increased significantly. The additional debt strain on companies’ balance sheets could lead to a wave of defaults in 2021.

Six tools that governments or central banks could use post-COVID-19 are as follows:

The UK base rate was at 0.1% as of 1 July 2020; there is limited scope to reduce rates further. The equivalent base rate is already negative in some countries (such as Denmark, Japan, Sweden and Switzerland) and in the EU. A negative base rate means commercial banks pay the central bank to hold reserves and excess cash. This penalises commercial banks for holding cash at the central bank, encouraging them to lend to businesses. Low interest rates should encourage borrowing for capital investment, although firms may not think this is the right time for such investment. A move to digital currencies would make negative interest rates easier to implement. 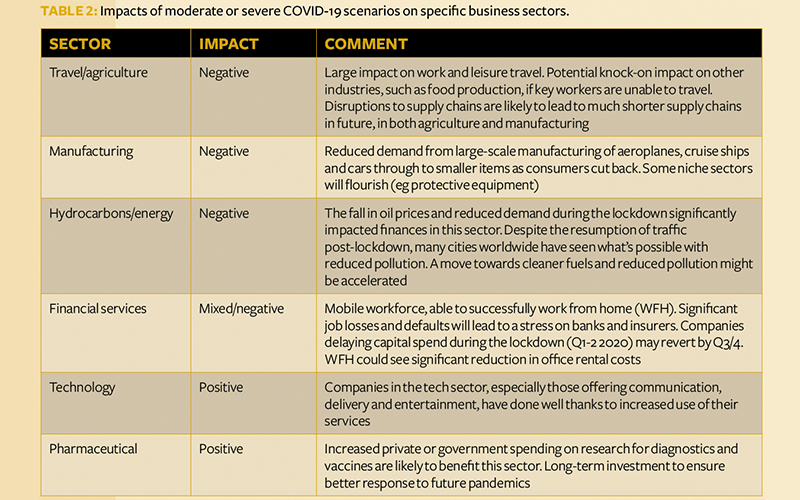 The bank can increase the supply of money in the economy by buying assets (gilts, corporate bonds) on the open market, or engage in repo trades/secured lending with commercial banks. The impacts of purchasing government bonds would usually be to:

This may not have the intended effect. Many commercial banks lack confidence in the economy and are not freely lending, preferring to keep excess reserves at central banks despite low or negative interest rates. The rapid increase in excess reserves held at central banks has ensured that QE has had little inflationary effect on the prices of goods and services, although it has led to asset inflation. The lack of price inflation has not reduced the value of government debt in real terms.

Buying corporate bonds will similarly increase money supply (to the holders of those bonds). This will lower corporate spreads relative to base rate, helping indebted companies that are seeking to re-borrow directly. Depending on targeted purchases, this could also remove poor quality deflationary assets (eg US ‘junk’ bonds) from the commercial market. This option may be unpopular, perceived as yet another bailout of the hedge funds that are either holding these junk bonds or that have shorted longer term corporate bonds.

Move to perpetual debt with no maturity date

A coordinated move to convert government debt to undated redemption dates would avoid governments having to roll over debts on potentially unfavourable terms, effectively amounting to a soft default. This would have large implications for the insurance industry, where available assets for matching purposes would decline significantly. 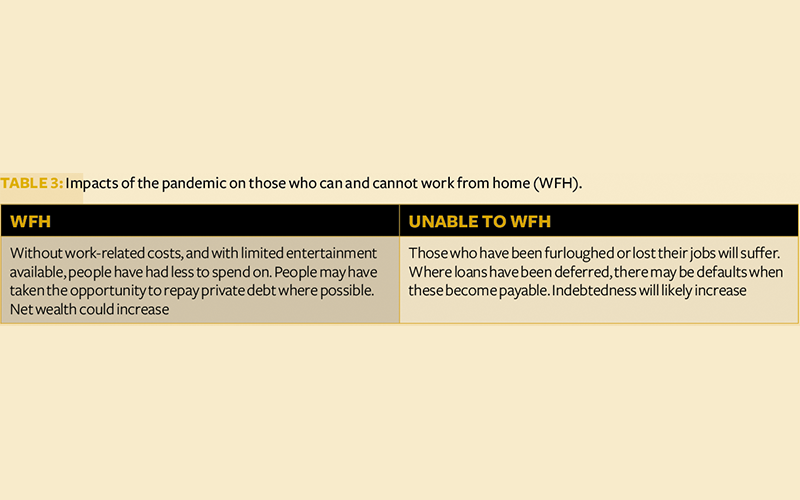 By reducing social spending the government can use its revenue to reduce debt levels, with the hope of reducing debt as a proportion of GDP. However, following almost a decade of austerity in the UK, it is unlikely that the government can continue to cut without damaging the fabric of society: reducing the incomes and benefits of those who need them the most and further depleting the essential services (teachers, transport workers, NHS workers) that the country relies on. This could further reduce confidence, as many of those whose spending might otherwise stimulate the economy will now find discretionary spending difficult, particularly once the furlough scheme ends. A knock-on impact could be reduced GDP, resulting in deflation and defaults.

Allow defaults to work through the system

The government has urged banks to keep lending channels open. Defaults are likely to come from companies with low margins, and from specific sectors that have been heavily impacted by the virus. There is likely to be some ‘junking’ of corporate bonds and non-repayment of loans.  Should the government step in?

Government intervention could stop further contamination or loss of confidence in the economy. Despite the overall similarity between par values of corporate bonds and bank loans, corporate default crises on their own have less of a real impact on the economy than banking crises. Large corporations (typical issuers of corporate bonds) have other avenues for raising capital. The pandemic hasn’t yet caused a banking crisis or affected all sectors evenly.  Following years of austerity and recent financial sector bailouts, this would be a highly unpopular move. Given high levels of government borrowing and the desire to recoup costs through taxes, it seems an unlikely avenue.

However, large scale corporate bond defaults, leading to contagion in the banking sector, could change matters. Bail-in regulations have already been enacted so that shareholders and creditors share in the pain of resolving
a bank failure, unlike in the taxpayer bailouts of the 2008 financial crisis. 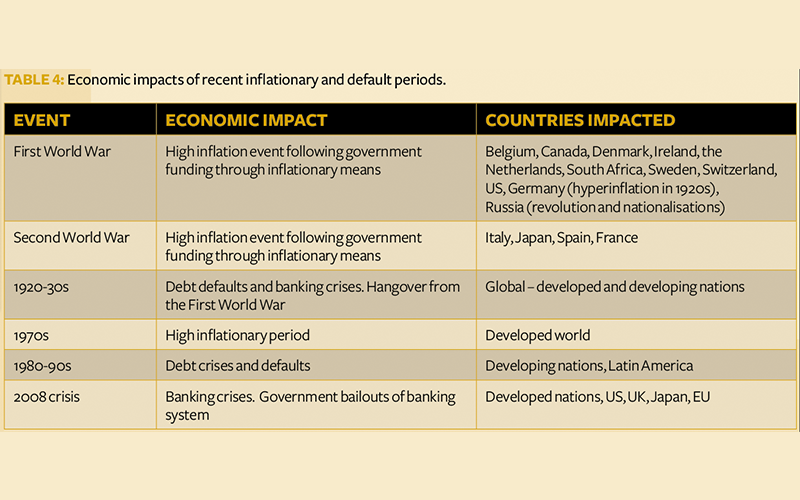 In 2008, the UK government nationalised Northern Rock, HBOS, Lloyds TSB and RBS, while Merrill Lynch, Freddie Mac, Fannie Mae and AIG were bailed out by the US government. Nationalisation was used to avoid systemic risk from bank insolvencies and may be required again, including for insurance companies.   Nationalisation has complications. It socialises the losses of private companies that have taken profits in recent years and raises the question as to which industries are deemed ‘essential’. So far, the financial sector
has managed the pandemic reasonably well. There is, as yet, no reason to nationalise or bail out banks or
insurance companies.

The economic impact of this pandemic will depend on its path and government actions. Significant recent inflationary and default periods are highlighted in Table 4.Pandemics (including the recent ones of 1957 and 1968) have not had economic impacts as serious as the events in this table.

This article appeared in our September 2020 issue of The Actuary.
Click here to view this issue
Filed in:
General Features
Topics:
General Insurance
Modelling/software