Investing in the future 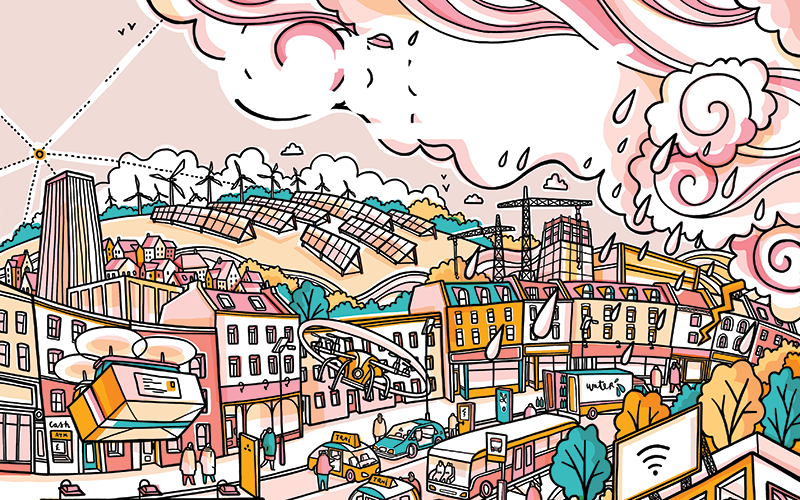 Investors are always thinking about future scenarios that might produce threats or opportunities.

Let’s consider three possible scenarios for UK infrastructure in the year 2050. The contents presented for each scenario have inevitably required imagination, but they all have their roots in developments that can already be seen today, excluding complete outliers. The scenarios will hopefully stimulate investors’ own thinking about the ways in which UK infrastructure may develop during the next 30 years – and how investors can help.

Scenario A: Middle of the road

It is 2050 and I am writing this at home thanks to a digital revolution. Many professional people nowadays go into  the office only once a week, if at all. In 2020, people were confined to their homes and forced to adopt new ways of working; they realised they enjoyed not having to commute in overcrowded trains. Every home now has full and reliable internet access, with powerful communication devices and big screens in the home workplace.

There have been profound changes in rail transport. No longer are commuter trains overcrowded. In the UK, the high-speed line between London and Birmingham was completed some years ago. There is still talk of extending it to Manchester, but the government has scrapped the proposed extension to Leeds, and is instead starting to use the money to improve rail services in the North of England and elsewhere. Crossrail has facilitated travel across London.

Road transport has transformed beyond recognition. The continuing development of artificial intelligence has resulted in the introduction of battery-powered driverless taxis in several cities. They are quick to respond to calls and provide safe and cheap door-to-door travel, so many bus and tram services have been discontinued. Electric vehicle batteries now offer realistic ranges and there is a nationwide network of rapid battery-charging points, so most vehicles are electric. Hydrogen-powered vehicles have also appeared because their capital costs have significantly reduced through technological advances. Many people are now renting a car when needed, rather than owning their own. Emissions in city streets have been drastically reduced, with proven health benefits, and there are more cycle-ways.

Another big change is under way in domestic heating. In 2020, around 85% of UK homes had gas-fired central heating. This could not continue if we were to meet our target of reducing carbon emissions to net-zero. A lengthy debate took place on whether there should be a switch to electric power for heating and cooking, often using heat pumps, or whether hydrogen-based solutions would be better. In either case, there are questions over whether the state should subsidise the cost of the change. A massive switch-over is now in progress.

A focused programme of housebuilding (some prefabricated) started in 2022 with assistance from pension funds and insurance companies, and it has been successful in reducing inequalities in society and improving the standard of living, despite a 10% increase in the nation’s population since then. Artificial intelligence has made many homes ‘smarter’.

There have been big changes in the workforce as unskilled employees have continued to be replaced by robots, though there are still many jobs that can only be filled by a human being. There is no danger yet that robots will be able to think like humans.

Climate change is increasingly affecting the way we live. It is often pleasantly warm, but a few days are so hot that people cannot go outdoors, and there are many severe storms that result in temporary losses of service from key infrastructure.

The National Infrastructure Commission’s valuable report in 2020 called for greater resilience to improve infrastructure reliability, but the extra costs involved have so far prevented full implementation. There has, however, been considerable investment in flood protection, and new building on floodplains has been banned. A plan has appeared for people living in certain low-lying areas to migrate gradually to new settlements on higher ground nearby, but fierce public opposition has prevented progress.

Nano-drones just three inches across are being used by the police for surveillance. Larger drones are used extensively for home deliveries and many properties have been adapted to facilitate this.

Water quality in the River Thames is much better through completion of the Tideway Scheme. This is symbolic of the continuing need to protect and enhance the natural environment.

The development of UK national infrastructure during the past 30 years has been very slow. The economy faltered after the 2020 pandemic and the massive debts the state incurred at that time. There was a failure to focus sufficiently on key national priorities and get the necessary investment under way in time to take advantage of the cheap money available throughout the 2020s. Pension funds and insurance companies might have made a significant contribution during this early period if there had been a climate of co-operation between them and government departments, but the opportunity was missed. Due to the loss of funding from the European Investment Bank, there was a need to establish a national investment bank to channel institutional investment into suitable projects. However, the Treasury refused to offer the guarantees that would have enabled the new bank to attract institutional money, and its launch proved a flop.

Criminals have perpetrated massive electronic frauds on businesses and individuals, and the financial system is starting to break down, with cash and cheques re-emerging as preferred payment methods. Widespread hacking has badly affected the reliability of much of our infrastructure. A quarter of homes still do not have fully adequate digital connectivity.

Climate change is proceeding more quickly than anticipated. The UK experiences severe storms and flooding every year, which cause serious property damage. Weeks of excessive heat in summer are distorting railway lines and affecting people’s health. Prolonged periods without adequate rainfall are causing droughts, so hosepipe bans are commonplace and bottled water has to be supplied to households regularly. Higher sea levels have already rendered a few coastal communities uninhabitable.

We have had to abandon our carbon emissions targets, resulting in political tensions with other nations. There was just not enough money to switch domestic heating away from gas. Electric vehicles failed to take off in large numbers, because users of public charging points became exasperated with the complexities of differing connections and having to wait for other motorists to finish. People living in cities despair because of continued significant air pollution and increased terrorism threats. Homelessness is getting worse. New schemes providing access for disabled people have ceased.

There is one bright spot – medical advances and the tailoring of medicines to individuals have improved the quality of life for older people, of whom there are now more than ever. However, not everyone is happy with wealthy people using genetic engineering to produce ‘super kids’.

Soon after the traumas of 2020, the UK government decided on a bold initiative to develop the nation’s infrastructure during the next 30 years, recognising that sustained economic growth would be necessary to be able to afford the investment. Education, retraining, technology, productivity and social change would all contribute to this growth. The government immediately established a national infrastructure bank after consulting pension funds and insurance companies about the guarantees it would need before investing in it. The bank helped to finance an extensive national housebuilding programme, raising some of the required investment from ‘social bonds’, and there is now sufficient accommodation for all. The bank also assisted with the upgrading of town centres, with fewer shops and offices and more leisure facilities.

A key to economic growth has been the application of new technologies in many fields. The retraining of the workforce has been facilitated by improved virtual reality techniques, making learning new skills a fun and immersive experience. Coding expertise is seen as important. Artificial intelligence has developed rapidly; vehicles on motorways are fully controlled and some physical structures respond to their own emerging problems. Robots have become more human-friendly, with increased capabilities. Three-dimensional printing is increasingly used, not only for bespoke products made by small businesses but also for mass production, revolutionising manufacturing and storage. Big data is usually stored on the public cloud, which facilitates access to the data whenever required and provides the tools for comprehensive analyses.

Following implementation of the National Infrastructure Commission’s resilience recommendations, there are fewer serious failures of infrastructure, despite climate change. New regulations and re-cladding have made our remaining tower blocks safer from fire. A new national water grid is making life more drought-proof in the South of England.

We have seen dramatic changes in transport. Much of the high-speed rail project has been completed, including the extension to Manchester. Improvements to rail services in the North of England and elsewhere commenced in 2022 and have been a catalyst for enormous private investment, stimulating economic growth and higher living standards in those areas. Driverless taxis are commonplace in towns and cities, and driverless buses in rural locations. There is a nationwide network of charging points for electric vehicles, based on standard connections prescribed by law.

Wind farms, solar farms and tidal generators continue to play a major role in our national electricity supply, and smoothing out their peaks and troughs is aided by using batteries in vehicles to store electricity. Net-zero was achieved for UK carbon emissions after gas was phased out.

Surveys show that people are feeling happier. The key to this success has been the willingness of the government to make visionary decisions at an early stage. Another vital ingredient has been successful co-operation with private investors. Actuaries are playing an important role in the analysis of infrastructure projects and the selection of risk-mitigation options.

Appropriate and reliable infrastructure is essential for our wellbeing. Investing institutions now have a chance to make a real difference by understanding the context, developing their own scenarios, spotting the best opportunities and working with other parties to achieve the changes that will enrich people’s lives.

Chris Lewin is chair of the Infrastructure Working Party

This article appeared in our September 2020 issue of The Actuary.
Click here to view this issue
Filed in:
General Features
Topics:
Investment
Environment