Lonely hearts: the effect of spousal death on mortality

Kira Henshaw, Corina Constantinescu and Olivier Menoukeu Pamen investigate the effects of spousal death on the surviving partner’s mortality – and how their model could be applied to disease outbreaks in closed communities such as care homes 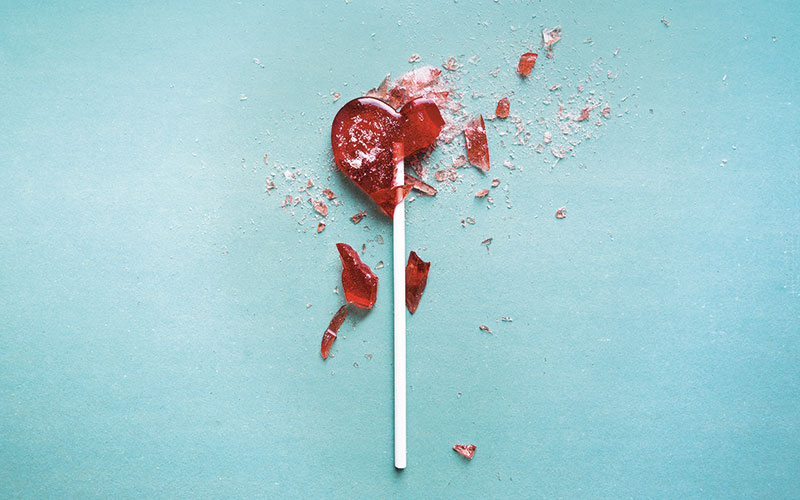 Coupled lives are conventionally regarded by actuaries as independent – but they actually exhibit a dependence that has a significant impact on mortality. Dependence is classified by how mortality patterns change as time passes after the occurrence of an event. It can be short term, long term or instantaneous in nature. In this case, we examine the remaining lifetime of a person given they are affected by the death of another.

Broken heart syndrome is a medically recognised and well-studied form of short-term dependence. It is often observed on the loss of a spouse. Bereavement triggers an immediate sharp increase in the survivor’s mortality, causing a temporary growth in the likelihood of their death. This raised mortality is greatest during the first period of bereavement, and eventually returns to that of the non-widowed population.

Dependence due to shared risk factors, also known as frailties, underly the causality of broken heart syndrome, and influence the intensity of couple dependence. Living conditions, healthcare access, dietary habits and mutual emotional stresses are just some of the lifestyle features that determine health and mortality, with selectivity in couple formation implying that individuals with equivalent levels of risk will be paired. This heightens the influence of frailties. The stronger the dependence, the more significant the impact of a death on the surviving life.

It is generally accepted that the loss of a spouse has a negative effect on the remaining lifetime of the survivor. However, what impact do socioeconomic influences and bereavement processes have on reactions to loss? Does the individualist structure common to high-income countries fail as a support system when compared to the community-focused social fabric of countries at lower levels of economic development? How significant to bereavement reactions are religious and cultural beliefs, and associated perceptions of death and bereavement?

The impact of socioeconomic features

Our recent research paper ‘Stochastic Mortality Modelling for Dependent Coupled Lives’ (bit.ly/38x1cnm) aims to address a number of questions through discussion of broken heart syndrome in Africa, using Ghana as a case study. Although broken heart syndrome is well-studied academically, we focus on how socioeconomic features change the structure of dependence between coupled lives. Is broken heart syndrome a universal concept, or do societal norms make the hearts of those in higher income countries more vulnerable?

Why is awareness of the dependence structure important? In this area of research, it is traditionally observed that the mortality of the individual returns to that of the non-widowed population over time. Improving supportive mechanisms during a person’s period of increased vulnerability will mitigate their risk of premature death. Identification of structural differences across populations will help to inform protective measures that are appropriate for the environment.

Our proposed model for the joint mortality of coupled lives parallels mathematical approaches to modelling ‘time to default’ on a loan. The arrival of death mimics the default event. Studying broken heart syndrome requires data that describes the death times of both members of a couple. Questionnaire responses relating to the grandparents of students at a local university provide a sample of 145 couples, with 84 single deaths, 61 double deaths, and indications of a change in bereavement reactions across generations. The number of deaths per year of bereavement is given in Figure 1. 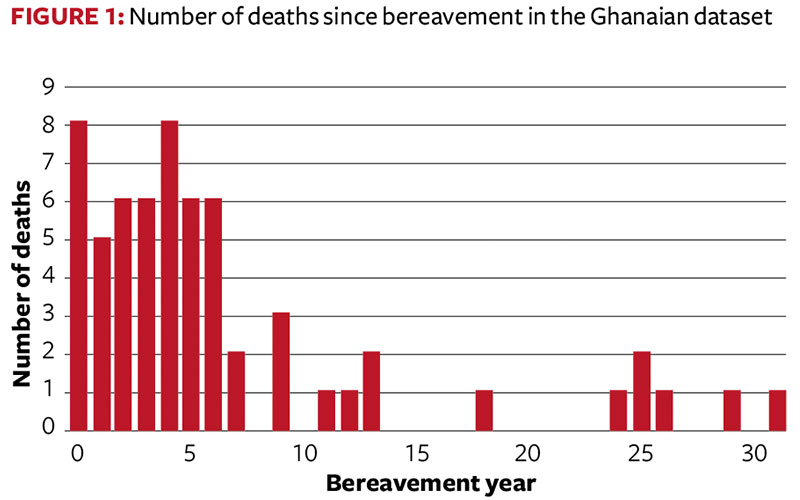 Comparison of the data with existing literature suggests behaviour under broken heart syndrome differs according to the socioeconomic environment. Why do we draw this conclusion? Previous research recognises a significant decrease in mortality following survival of the first year of bereavement. In the Ghanaian dataset motivating our model, however, the period extends past the one-year mark, while the severity of the increase in mortality is less significant.

Dissimilarities in the mortality trend motivate the definition of a mortality model that represents the existence of dependence with less immediate significance on the remaining lifetime of the surviving spouse.

Table 1 shows how the model progresses in three stages, corresponding to the number of deaths that have occurred within the couple. 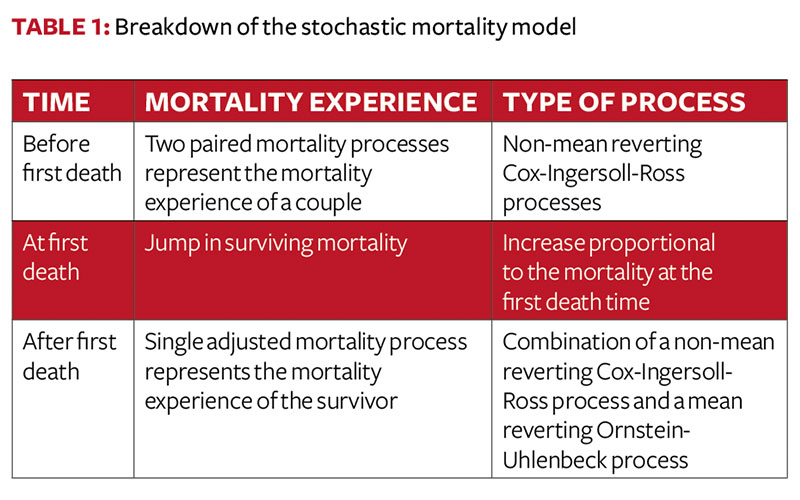 An immediate sharp rise in the survivor’s mortality on the death of the spouse is a defining characteristic of broken heart syndrome, and the causal component of the dependence. The difference between an individual’s mortality rate before and after the death characterises the impact of loss on the bereaved spouse’s health and remaining lifetime.

Although we focus on short-term structures due to the nature of coupled dependence, the model can be applied to environments in which the dependence differs. One example would be in the case of twins, when dependence is considered long-term due to the extended period of risk-sharing during childhood. Redefining the mortality jump allows the user of the model to switch from one scenario to the next.

Application to COVID-19 in care homes

A sudden increase in mortality does not only arise due to a broken heart. COVID-19 has encompassed all aspects of our lives since the beginning of 2020, and in many countries the virus epicentre lies in care homes. As of May 21, for countries with at least 100 total deaths and for which official data is available, between 24% (Hungary) and 82% (Canada) of total deaths associated with COVID-19 have been those of care home residents (bit.ly/31QYqbk).

COVID-19 is highly infectious, and contraction by one care home resident significantly increases the risk of infection and consequent death for other residents. The typical care home group’s vulnerability to such a disease heightens the acuteness of the risk if the infection takes hold. Recognising the immediate increase in mortality at the moment of first infection, the care home becomes the ‘couple’ in the context of COVID-19.

We are currently working to adapt our model for the joint mortality of coupled lives in order to address the elevated mortality of residents during a COVID-19 outbreak in a care home. The two elements of dependence forming the coupled structure appear in the care home environment. Causal dependence is induced by the infection, while the care home represents the shared frailty.

Due to the initial testing capacity shortage, care homes were not generally prioritised during the pandemic’s early stages. Although the primary infection is the trigger for the jump in mortality among a care home’s residents, the time of the first death associated with COVID-19 is a more appropriate indicating measure. Comparison with non-crisis care home mortality will allow us to identify the period of vulnerability.

While the gravity of the pandemic is diminishing, its impact will be felt globally for the foreseeable future. The extended model we propose will be applicable to the outbreak of any infection within a care home. Awareness of the period of risk will provide a timeline to inform the care home sector of the level of protective measures that should be implemented in order to mitigate the implications of the outbreak. Through varying the severity of the mortality increase in line with the vulnerability of those involved, such a model may be applied to all closed communities in order to minimise the brutality and infectiousness of a disease.

Dr Olivier Menoukeu Pamen is German Research Chair in mathematics and its applications at AIMS Ghana, and a reader in IFAM at the University of Liverpool

We would like to acknowledge the financial support of the EPSRC, ESRC and the Alexander von Humboldt Foundation through the research chair programme at AIMS Ghana. Special thanks to Perpetual Saah Andam.

This article appeared in our August 2020 issue of The Actuary.
Click here to view this issue
Filed in
General Features
Topics
Health care
Life insurance
Modelling/software