Peter Joshi asks: what are the actuarial implications  of the Human Genome Project? 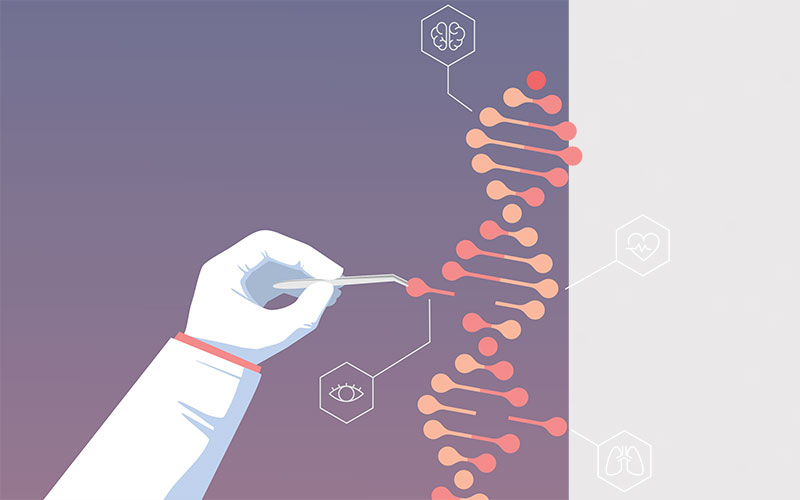 In April 2003, the first human genome was sequenced – in other words, the 3bn-long sequence of the four chemical groups constituting our DNA code were recorded in the form of one letter for each group, covering 100,000 pages of A4. Since then, we have rapidly accelerated our understanding of how the approximately 3m small genetic differences between each one of us affects who we are, influencing our height, hair colour, intelligence, susceptibility to disease, how long we live and so on.

From an actuarial point of view, though, surprisingly little has changed. In 1997, the UK government and Association of British Insurers agreed the Concordat and Moratorium on Genetics and Insurance, which has successfully managed patients’ concerns around their interests, as well as insurers’ fears around information asymmetry. Nonetheless, since the UK Biobank released genetic and health details for 500,000 participants in 2015, genetic understanding has accelerated – and change for actuaries is coming. Falling costs and increasingly connected knowledge are helping to form a virtuous circle, and many new applications of this knowledge beckon.

The progress on costs has been remarkable: the first human genome took 15 years to complete and cost US$2.7bn, whereas we can now perform this feat in a day for around US$1,000. This means researchers can now conduct very large studies – for example, recent lifespan research at the University of Edinburgh used the DNA of more than half a million subjects. These subjects were generally still alive, so we did not know their lifespans. However, we overcame this hurdle using information about their parents. We tested associations of inferred parental DNA with the parents’ 1m often complete lifespans. We detected a myriad of effects caused by DNA changes, spread across the entire length of the genome. Similar to discoveries for other common diseases, the impact of these relatively frequent gene changes were individually small – perhaps 0.25 years of expected lifespan.

This is not to deny that modest changes in DNA cannot have large effects, but that is the exception, not the rule. Nonetheless, initial clinical and actuarial focus were the exceptions – conditions where a single change in one gene had a big, often disease-defining effect, such as in Huntington’s disease, cystic fibrosis and some forms of breast cancer. Genetic pinpointing was possible precisely because a specific change had a large and clear effect. In these cases, the principal mitigant to information asymmetry was the continuing ability of the insurer to use family history, bolstered by clinical practice that restricted genetic testing to those with family history of disease. In any case, these conditions are relatively rare, and in the great majority of cases, early-onset – manifesting before the age at which insurance would normally be taken out. A customer who had had a genetic test for a (rare) disease was often already showing clinical symptoms, or had family members with such symptoms. The underwriter could use these factors, even if a genetic test was not disclosed. Importantly, clinician-patient interests – carrying out predictive testing and informing interventions – did not need to clash with insurers’ interests, not least as public opinion would likely back the former.

While the human genome project has continued to increase the scope and depth of our understanding of these rare genetically determined diseases, the biggest change has been in our understanding of more common diseases. The role of genes here is much more complicated. Environmental effects such as diet, lifestyle and social economic status combine with the small effects of many different genes to affect an individual’s risk of diseases such as most forms of cancer or cardiovascular disease. These diseases are thus known as multi-factorial. This is an important but poorly understood insight; inherited DNA plays a (possibly small) role in many traits – some unsurprising, such as height or cholesterol levels, but also affecting traits such as education level, propensity to smoke, or even propensity to take risks such as speeding.

The first tool in the geneticist’s box for multifactorial traits is ‘heritability’, which measures the degree to which a trait is genetically determined, on a scale of 0-100%. Such measures are difficult to make, but estimates are made by looking at how much a trait runs in families – and particularly by examining similarities and differences between twins. As well as issues of sample size and mathematical complexity, the principal difficulty in measuring heritability arises from determining whether the phenomenon running in families is determined by DNA or by something else – particularly family environment. For example, a person’s first language runs strongly in families and is a good example of a family environment effect, rather than a DNA effect. Nonetheless, geneticists have made estimates for many traits, common diseases and risk factors, such as height (around 70% genetic – Golan and Rosset, 2011; Vinkhuyzen et al., 2013), IQ (35-50% – Davies et al., 2011), susceptibility to heart disease (around 40% – McPherson and Tybjaerg-Hansen 2016) and lifespan (around 10% – Ruby et al., 2018).

The lifespan figures might seem modest, but our intuition is not always reliable here: if your father or mother lived 10 years longer than average, how much longer than average can you expect to live? We can measure this reliably, and the answer is a fairly modest 0.8 years – around 1.6 years if it was true for your other parent, too. Some fairly sophisticated modelling suggests that only around half of that effect is actually DNA, with the rest being family environment (socioeconomic status etc). This gives us our estimate that variation in lifespan within the UK is perhaps only 10% genetic. 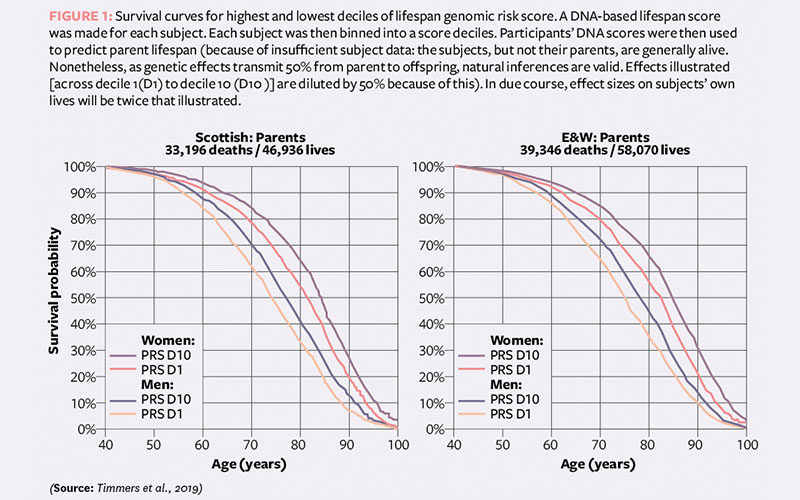 Of course, the modest genetic share is, in many ways, good news, as environmental interventions can more easily shift the dial at an individual or societal level. In any case, genetic research offers many potential benefits, such as our improved understanding of biological pathways, which can inform effective interventions.

Recent evidence has shown that drug trials for disease are much more successful in candidates for whom there
was pre-existing genetic evidence for the target. A focus of my research programme is identifying target genes to slow ageing and extend healthy life. However, from an actuarial point of view, genetic evidence has a different interest – namely, is genetics usefully predictive of disease or lifespan?

At an individual level, the short answer is no. At present, even individual height cannot be strongly distinguished from the top and bottom deciles of the best DNA height scores. However, the same is true of a socioeconomic status-based prediction of lifespan. Nonetheless, group distinctions are drawn that are meaningful to annuity underwriters based on socioeconomic status. It is still early days, but using a score that we can calculate for anyone at birth or later, using DNA alone, we have found a 10% increase in mortality rates per standard deviation in the score. This equates to around five years of life between the score’s top and bottom decile. Similar predictions are now possible for the risks of common diseases such as heart disease, where whole genome predictions across the population are now as predictive as those for the rare single-gene forms of diseases (Khera et al., 2018). The accuracy of such predictions is likely to improve significantly during the next few years as researchers move from studying perhaps a million subjects to tens of millions, and our machine learning becomes more fine-grained as a result.

Peter Joshi is an actuary and a Chancellor’s Fellow at the University of Edinburgh, specialising in the genomic basis of human lifespan

This article appeared in our August 2020 issue of The Actuary.
Click here to view this issue
Filed in
General Features
Topics
Health care
Life insurance